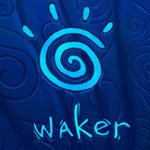 In the world of Waker, all of our dreams are a path to the stars and back. Sometimes these paths are broken and the dreamers sleep forever. It's up to you, a Waker, to fix these paths so that the dreamers can once again awaken from their slumber. It sounds like a terrific story in a beautiful world of sleep, but between the mundane presentation and terrible gameplay, Waker was one dream we were dying to wake up from.

Waker is all about drawing paths for yourself through related movements elsewhere in the gameworld. Your “waker” will grab an orb which will allow him to construct these paths when you press D. The paths will occur in a different part of the screen that is marked with red fog rising from the ground. Once you press D, the path will begin drawing itself. Moving your waker in one direction will cause the path to rise, and the other direction will cause it to fall. This description is really starting to sound more complicated than it really is. Essentially moving left and right while drawing paths is all there is to the game.

You'll need to use these paths to reach higher platforms and avoid obstacles that will teleport your waker back to the starting point, but really, worrying about obstacles is fairly irrelevant in a game whose basic mechanics are so inherently frustrating. While the idea of path drawing is simple to grasp, it almost never works out how you want it to. Waker is a perfect example of a game where you know exactly what to do and yet you can never quite seem to do it. It can be beyond frustrating. You'll want to throw in the towel before you've completed the fourth stage.

What's most surprising is that Waker is one half of an MIT study intent to determine how easy it is for someone to grasp play mechanics in different circumstances. Were keeping those mechanics so frustrating part of the study? It's possible. Playing Waker does offer about as much freedom of play as you might expect as a caged lab rat.

The other half of the Waker experiment, entitled Woosh, uses the same play mechanics but removes any trace of story or character. Woosh takes place in an abstract world with platforms and stages identical to Waker, but with new art slipped in. As you might expect, it's not any better (although Woosh does have a cheerier soundtrack).

Even if the mechanics weren't so frustratingly executed, Waker is a game with a rather simple concept that doesn't offer enough to hold our attention. It's a valiant effort as a student project, but it just misses the mark everywhere that counts.