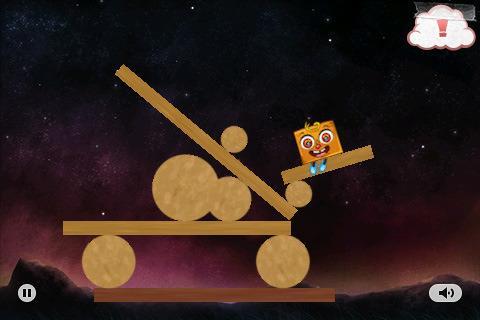 Physics games seem to be gaining a lot of fans these days. At the time of this review, Angry Birds has remained at or near the top spot in the App Store for nearly six months. Grenade-fest Fragger isn’t too far behind. So it makes sense that the popular Flash game Wake up the Box! has made its debut on the iPhone as well. Too bad it ends up as a lightweight addition.

The premise behind Wake up the Box! is to set up simple machines that jolt a cute wooden box awake (picture Spongebob Squarepants, but without the pants). To assemble the machines, you are given a set number of shapes like rectangular boards or spheres to attach to certain parts of what is already onscreen. This could mean creating a seesaw, attaching an extending arm from a spinning cube, or building a giant counterweight to drag the box around. This is all powered by a great physics engine underneath, where weight and momentum feel very real. It’s quite funny watching the box start to fall into oblivion below, a big grin on his face having been woken up.

To move pieces into place, all you have to do is touch anywhere on the screen and drag your finger to where you want the shape to be. Shapes can only attach to wooden surfaces, and turn from a dark transparent shape to bright and solid. However on the iPhone’s small screen, you will often have to drag to a certain point and then have to lift your finger and continue positioning the piece. If the piece has attached itself to the scenery before you were ready, too bad – you’ll have to re-start the level. This is particularly frustrating when building a complex shape in the later levels, and mess up the last piece you were working on.

Graphically, Wake up the Box! isn’t anything special, but more than functional. Again, the box is very cute and it’s easy to see where pieces can attach. The music, while not particularly memorable, doesn’t interfere with the game.

The main point of the game, of course, is the puzzles. While some puzzles are nice and straightforward, others will test your reflexes. One particular standout involves a small vehicle driving slowly towards the box, which is sitting on a platform. You have to build a structure on the moving vehicle that will knock the box off the platform in time. Another involves building what looks like a giant snowman with a big arm on top of a teetering board. Again, they are very fun.

The big problem is there isn’t much there. With only 15 levels, you can probably blow through Wake up the Box! in under half an hour on your first playthrough. Even with OpenFeint online leaderboards – a big plus for a game that relies on a point system for any sort of replay value – there really isn’t enough to do. In fact once you have a solution, there’s absolutely no point in going back.

Trying to gain popularity on a trend is by no means new, but Wake up the Box! feels pretty hollow. With so many incredible standout titles in the physics puzzle genre, the only thing Wake up the Box! has going for it is that it’s free. For a buck more, you’d be better getting a game with some real meat on it. Wake up the Box! isn’t big enough to be a real log, he’s just kindling.