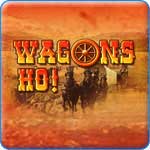 When it comes to simulating the trials and travails of America’s mid-19th century pioneers, think The Oregon Trail is the only game in town? Guess again, because refreshing new strategic outing Wagons Ho! challenges aspiring quartermasters to march a train of wide-eyed settlers across the wilderness to a new life in the West.

Surprisingly simple and brisk, you’ll be pleased to note that it’s possible to enjoy an engaging and eventful trip across miles of wilderness in just five minutes or less. Alas, life on the road isn’t always easy, sadly due less to the frequent random events (allies deserting, hostile Indian attacks, etc.) one’s confronted with than the title’s formulaic play, limited scope and archaic presentation.

Let’s give props where they’re due, however. Taking turn-based tactical action and refining it to its basest elements, the game makes resource juggling, economic management and exploration fun and accessible to all. After choosing a character (say, Banker Ben or Farmer Fran), each of whom enjoys certain starting benefits – more food, money and so on – it’s off you go.

As boss of a wagon train, it’s your job to blaze a trail through the West, and reach an ending town with as much money and as many settlers as possible. The trick being, of course, that there’s miles of harsh terrain to cross, dangers to face and decisions to make along the way in the meantime.

Therefore picking a path through each individual game, which takes the form of a self-contained, randomly-generated map wherein everything (towns, plains, mountains, rivers, swamps, etc.) is depicted in miniature, is just the beginning. You’ll also have to make a number of important big-picture decisions along the trek. For example: When to trade goods for cash or food for turns; make a sprint for nearby trading posts or attempt to trade with passing hunters when chow runs out; or risk being caught in winter’s icy grip in hopes of turning a quick buck.

Starting out at a random homestead, you’ll basically be awarded a set number of turns in which to move before winter arrives, amount of cash and stock of both settlers and food. Caravans, pictured as a horse and wagon, are controlled with the mouse. To move, just select any on-screen destination. A path is then offered, along with a number depicting the amount of turns that will be subtracted to complete the action.

Which way to travel across plain and valley is, naturally, entirely up to you, with icons (food barrels, coins, Indians’ faces, shaking hands et al) depicting points of note scattered willy-nilly about the landscape, any of which may be investigated whenever you like.

The kicker, of course, is that you’ll want to visit as many of these areas as possible in hopes of bolstering your wallet, larder and supply of settlers while also crossing the country as fast as possible. (New territories are unlocked for collecting set amounts of cash and chow, and the quicker you breeze through maps on one of the game’s multiple difficulty levels.) However, there’s only so many hunting trails, gold mines or lost temples that can be chased down before you either get caught in the cold or run out of vittles, leading to loss of equipment, life and lucre.

Therefore a careful balancing act must always be maintained. To waste precious time building wagons that can be sold for a pretty penny, temporarily wintering at a convenient settlement in exchange for losing bonus points or trade food for the aid of militiamen who’ll help speed your progress and add extra turns… the choice is ultimately yours.

Sadly, while the setup lends itself to intuitive, easily-learned controls and gameplay basics, because of its tightly-confined mechanics, the adventure never progresses far beyond initial ambitions. Though you’ll pleasingly enjoy fresh map layouts and challenges every time a scenario’s generated, the lack of a compelling storyline and a limited range of random happenings inherently limits long-term enjoyment.

Graphics and sound effects, albeit not disappointing, prove unexpectedly rudimentary too, robbing the proceedings of personality and excitement. As such, the outing proves more passing diversion suitable for firing up during the odd coffee break or need for stress relief than addictive marathon time suck.

For all its lack of depth and excitement though, the unpredictable nature of featured events and idiot-proof approach to tactical planning makes a great entry point to the world of desktop strategizing. This being the case, consider Wagons Ho! both a suitable way to kill a few minutes here and there, and welcome introduction to the genre for beginners and amateur historians alike.