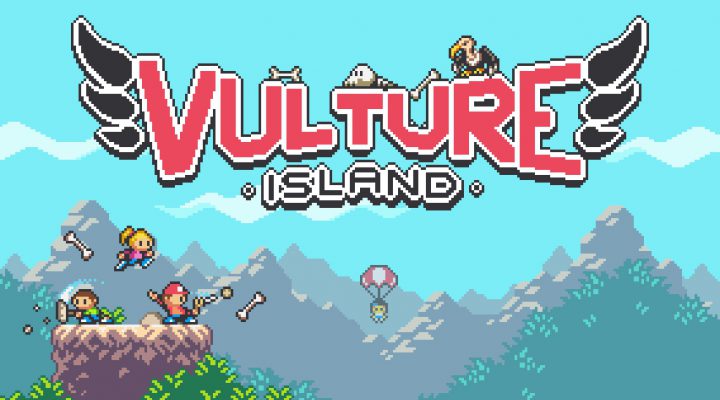 Great combination of puzzles and platforming to create a world both active and interactive.

Each character's experience is slightly different based on their surroundings, yet cohesive in shared gameplay mechanics.

Strange, silly NPCs to meet and interact with.

Lack of direction and explanation can be frustrating, resulting in periods of aimless wandering.

Controls are difficult to get used to, with a floatiness that makes precision platforming harder than necessary.

Vulture Island is the second long-form adventure by quick-play arcade aficionados Donut Games. Their first, 2014’s Traps ‘n Gemstones, combined Metroidvania exploration with instant death high score chasing to create a challenge that felt both immediate and expansive. Vulture Island provides the same satisfaction in a different format, swapping the single dungeon layout for separate stages spread across one larger island and focusing more on puzzle-solving than pyramid-mapping. The result is a game that should appeal to fans of Traps ‘n Gemstones, point-and-click adventures, platformers, and definitely all three combined. 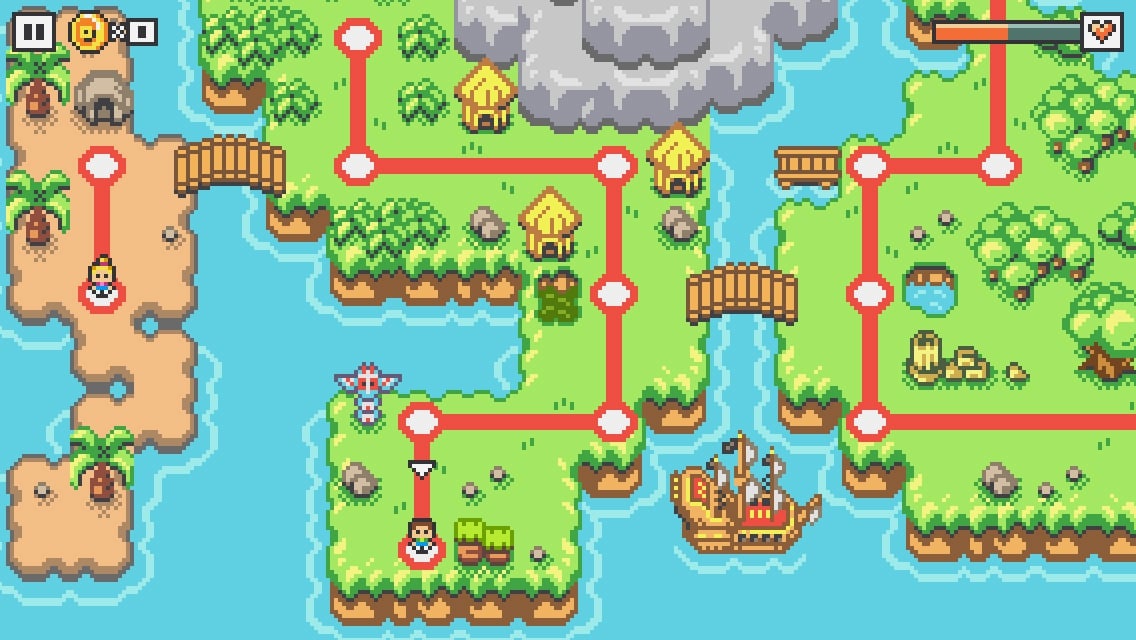 The story begins when a flying machine carrying four friends—Benjamin, Alex, Paul, and Stella—falls apart and scatters them around the remote island they were passing over. Each friend lands in a different part of the island with nothing but the clothes on their back and the determination to track down their other pals. You’ll take control of each character (except Benjamin) as they explore their surroundings and try to figure out how to get back home.

Since each character landed on a different side of the map, their stages and experiences will vary greatly. Paul washes up near a pirate ship and small village, resulting in a lot of interactions with natives and their roving visitors. Stella finds herself near an intricate series of caves, leading to a lot of spelunking through dark corridors. Alex ends up in a fairytale-esque forest populated by talking trees and recognizable red-hooded girls. 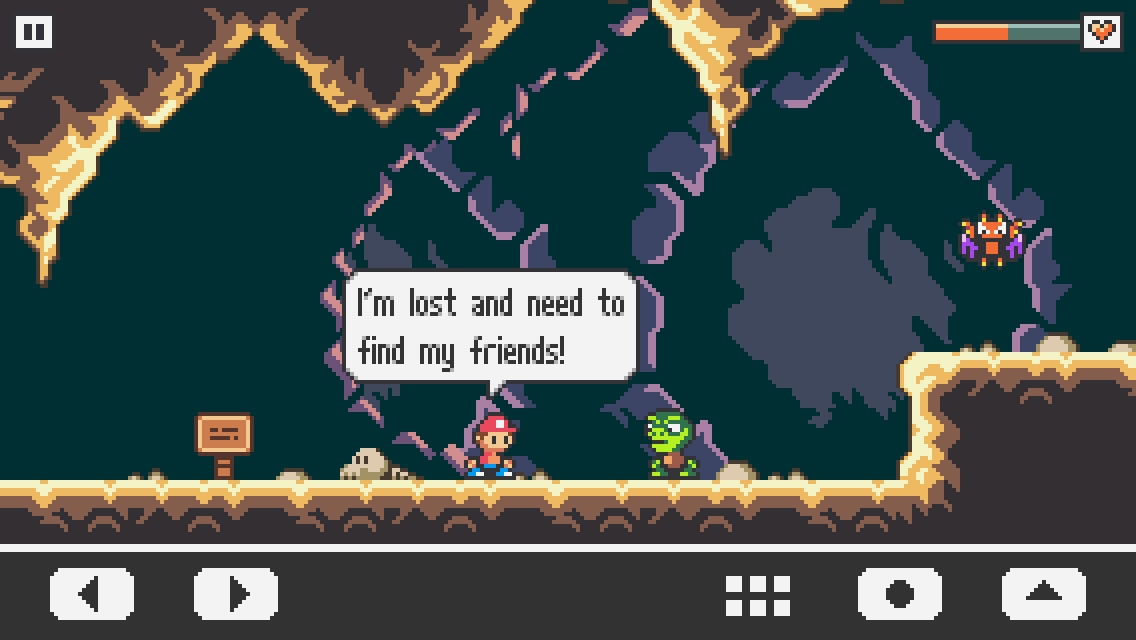 Although their scenery differs, the actions you’ll take with each character stay the same. You’ll travel around standalone levels that make up each characters’ accessible area, meeting strange NPCs, collecting items, and maneuvering around short but cleverly designed stages. Vulture Island is a pretty evenly split puzzle-platformer, requiring delicate jumps and timing in some areas and thoughtful item use in others. The game does a great job of combining the two mechanics, placing key objects at the top of bee-infested platforms and opening up new rooms to explore once you find the proper use for those objects.

The controls you’ll use during exploration do take some getting used to. Although you’re only jumping or shooting each characters’ found weapon, movement feels floatier and less precise than in Traps ‘n Gemstones or a game like Nubs’ Adventure. It is not broken, but challenging: stages we fumbled on the first few times through became easily navigable on subsequent passes after enough practice. But certain aspects, like enemies’ hitboxes, always felt too imprecise, resulting in unexpected hits to our health bar when bouncing on baddies’ heads in an attempt to reach distant items. 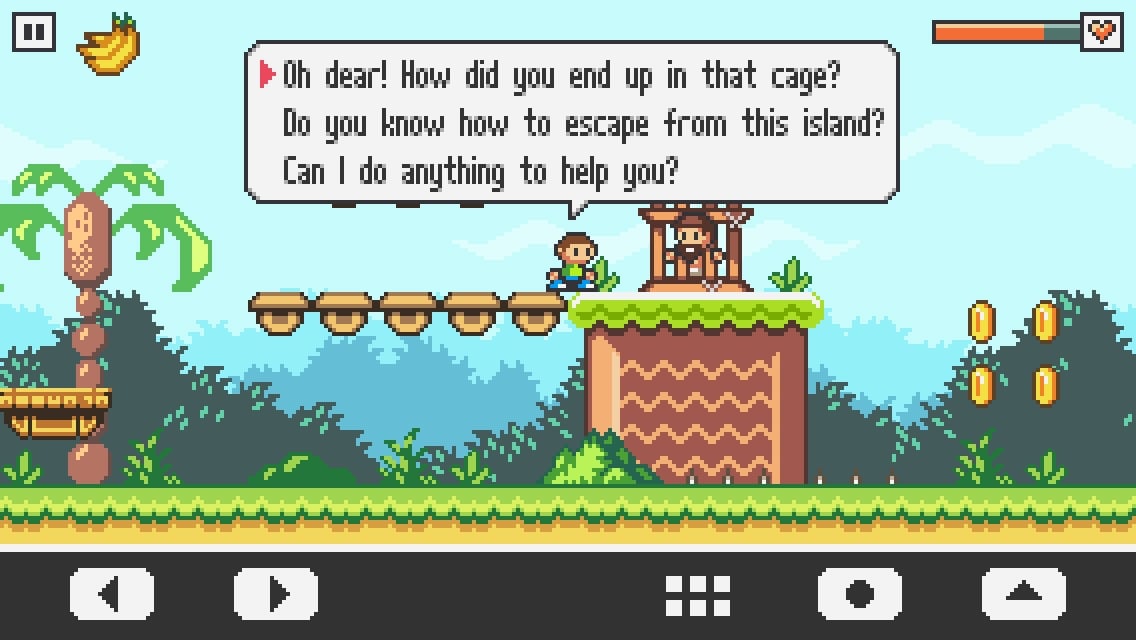 Those items and their associated puzzles are much more reminiscent of point-and-click adventures than Metroidvanias: you won’t gain new physical powers like the double-jump. Instead, you’ll unlock doors with keys and put out fires with water, as well as more bizarre solutions like getting an animal to regurgitate its most recent meal. There are no P&C-style logic mini-games, however: everything is done within the environment itself, creating an extremely interactive and alive series of levels.

The level-based format is an interesting approach to this type of game, especially since players are free to visit any stage in any order and to swap between characters freely. This means if you’re stuck on one character’s next step, you can switch to someone else for a change of pace. It also makes returning to previously visited areas quick and easy: each level is fairly small in itself, so you’re never more than a map screen and a few platforming tricks away from your destination. 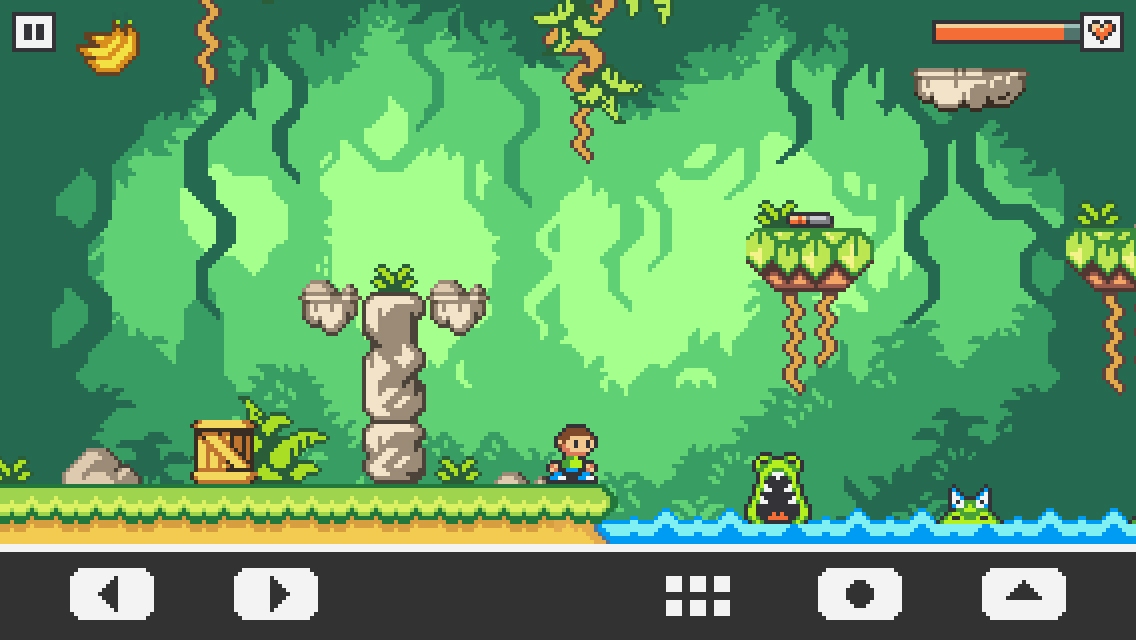 However, this format also means there’s little direction or guidance on where to go next. Players have the entire world at their fingertips the moment the game begins, and playing the levels in order will not be the optimal path. It’s also unclear when you “finish” a character’s path: although Paul, Stella, and Alex each have specific end goals, we don’t really know what that goal is or when it’s achieved. We completed the game by switching characters when there seemed to be nothing left to do in a person’s arc, but we didn’t know anyone was absolutely finished until the credits rolled. This lack of direction could be freeing for players who simply want to explore unhindered, but will be understandably frustrating for others, especially if you don’t know whether you’re stuck on a puzzle or simply out of things to do.

Overall, though, despite the lack of direction and precise controls, we enjoyed our time on Vulture Island. Each individual level, from the gorilla-guarded jungle to the seagull-infested pier, is a charming slice of an oddly cohesive whole thanks to the shared collection of puzzles and items scattered around the world. Although more character crossover would be nice—wouldn’t Paul’s hammer be useful in Stella’s mine?—the separation of characters allows players to complete the game in the order they choose, taking a break from any overly complex puzzles or platforming challenges. Any break won’t last long, though, before you inevitably return, tossing bananas at strangers or fixing swamp monsters’ phones, absorbed in the strangely satisfying world of Vulture Island.