Vote For Me Presidential Election Review 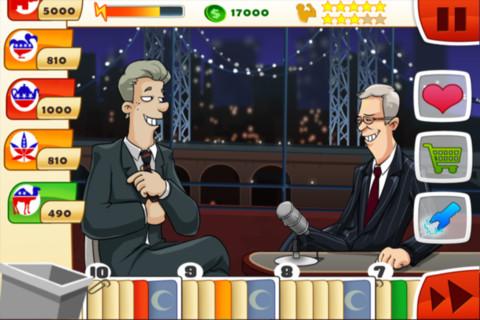 Vote for Me campaigns for your attention on your iOS device

It’s election season for politicians across America as they battle to be the representatives of their constituents. It’s always election season in the App Store–games and apps of all sorts vie for a position at the top of the chart, earning them even more attention from other potential supporters. Not unlike politicians, some apps just want to give the people what they want, whereas others are after the money of their supporters. If only we could elect Om-Nom from the Cut the Rope franchise; now there’s a guy I’d give money to. Anyway, combining both the worlds of politics and the games section of the App Store is Vote For Me Presidential Election. Is this a game by the people for the people or less fulfilling than a politician’s campaign promise?

Vote for Me puts players in the role of a campaign manager for a political candidate who is hoping to work his way up the ranks of the system and eventually land in the Oval Office. You’ll have to gather contributions from donors–or sell an organ or two–and make sure your potential President attends events that will further his career. You will also be in charge of his purchases, which can benefit the candidate at a cost to his reputation.

The gameplay of Vote for Me is rather simple. In fact, it’s honestly a little generous to call it “gameplay.” It’s really mostly dragging and dropping, as well as occasional item purchases. The screen is set up with events scrolling down on the left hand side. They have a number on them, which is how much said event will cost, and a color that signifies the difficulty and likelihood of success. You’ll take these events and drag them into your candidate’s schedule, which appears on the bottom. As an event occurs, it will play out in a simple animation on-screen. Events can be swung in your favor with the help of a boost or an attack on an opponent, available on the right hand side. Regardless of success, these happenings will cost you energy and money. Both categories can be replenished with a purchase from the store.

The game is essentially a strategy title. Some of the items you can buy come at the cost of controversy. Replenishing energy with coffee won’t do much, but it’s also not going to affect the candidate’s reputation. Choosing to visit a girlfriend, on the other hand, might cost you some votes. You’ll have to keep an eye on your cash as well, because that’s used to land events. Run out of cash and you’ll have to raise more through fundraisers that may get you the wrong kind of attention. It’s all a percentages game. The calculated angle of the risks kind of takes the fun out of trying them — Everything is very black and white. Sure, there are some events that carry a 30% or 70% risk to them, but it’s not all that interesting.

Most of the appeal of Vote for Me comes in its humor. There are political scandals that wink and tip their caps to actual occurrences, outlandish events that take stereotypes to the extreme, and plenty of tongue-in-cheek humor for any part of the electorate. It’s moderately funny the first time and gets progressively less entertaining over the course of the game.

Perhaps the biggest joke the game pulls is one on the player. It’s almost impossible to win without the help of a Super PAC, which will cost you some cash. It’s fitting and even a little funny–but a game that isn’t really that great in the first place needing the backing of money to even be worthwhile is a little too on the nose for political junkies. 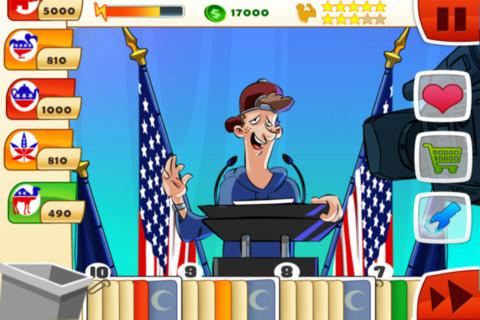 The graphics of the game are cartoony and light-hearted. It’s well done for the most part, though there are some animations that feel thrown together and just a little off. If the art style was a little more in the style of political cartoons, it may have fit better. What’s here works but, similar to the rest of the game, just isn’t that great.

If Vote for Me were an actual political candidate, we probably wouldn’t know it was running. It’s a third party choice that even the third party choices don’t realize is in the election for no other reason than it’s a timely period to get some attention. The game is coming out just in time for the actual election, when people will no doubt be searching the App Store for terms that appear right in the game’s name. It’s a somewhat funny interactive commentary on the political process that misses more than it hits, and just isn’t all that fun. Add to that the almost necessary in-game purchase needed to compete and it’s a little like buying a gag gift for yourself–you laughed when you saw it on the shelf at the store, but now you own it and paid money for it and it’s just not that funny anymore.