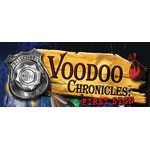 While voodoo is a theme many hidden object fans will already be familiar with, Voodoo Chronicles: First Sign plays with the word by also making it the name of the main character: Detective Voodoo. Voodoo is called in to investigate the murder of wealthy bank owner Mr. Coins who, before his death, commissioned an expedition to a lost island to discover its secrets. Of course, something went terribly wrong out there on the high seas, bringing a curse back to the city, dooming all of those involved. As our hero detective, you’ll need to solve the mystery before the voodoo curse can spread even further.

Voodoo Chronicles: First Sign is a fairly basic hidden object / adventure game. The story plays out through newspaper clippings that reveal very little information and cutscenes that contain such laughable voice acting that it’s easier to mute the game and just read the text. As for the gameplay itself, hidden object scenes are clearly defined by floating question marks, but the scenes are often filled with far too many shadows, leaving one or two items truly hidden unless you tweak the brightness settings on your monitor or let the hint system “find” them for you. There are some unusual choices for the names of some items (an Apple Core on a list might turn into a full apple on the scene, for example), and an issue where duplicate items appear in a scene, forcing you to find just the right one to click on for your list.

Puzzles fare better, as they don’t over-rely on the tile sliding or twisting mechanics seen in so many other games. Instead, you might control a crane to remove boxes while your tracks deteriorate around you, or place rubber bands around electrical switches to solve a Minesweeper like puzzle.

As you travel through the game’s many lengthy environments (the entire experience can easily take you upwards of three hours, depending on your use of puzzle skips or the hint system), you’ll find a few inconsistencies in the “reality” of the story, as you’ll be placed in charge of a broken train with no staff on board, only to see staff on the train as it pulls into the station. You’ll also break all detective and police ethics by stealing evidence from crime scenes and willingly giving it to others as bribes for information (as just one example). While I wouldn’t normally consider myself a stickler for the rules, the role of “detective” here seems to be in title only.

There are some elements that save the game, however, with one being the ability to find additional hints scattered about the environments. While your one remaining hint will forever recharge (slowly), these additional hints come in very handy in certain hidden object scenes where you need two or three more items and want to move on without waiting. Conversely, the puzzle skips charge far more quickly, allowing you progress even faster if you’re stuck.

All of that being said, it’s not that Voodoo Chronicles: First Sign is a bad game, it’s just incredibly average from beginning to end. If it contained a more original theme, or made the hidden object scenes easier to complete, perhaps it could stand out from the pack. As it stands, it does far too little to break the mold of its predecessors and suffers from the stigma of “try before you buy” because of it.