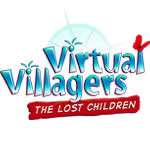 Temperatures are in the teens, snow blankets the ground and icicles hang from the eves. Brrrrr! It’s hard not to think about heading for a warmer climate — something tropical, balmy and bright!

Well, it may not be possible to jet to Hawaii or the Bahamas, but you can at least pack your bags, figuratively, and head for a sultry retreat in Isola. That’s right. The long-awaited sequel to Virtual Villagers is here!

Continuing the story, Virtual Villagers: The Lost Children beckons for a return to that beautiful Pacific isle. On our first visit, the castaways explored every nook and cranny of their south beach getaway, eventually moving an immense stone blocking a mysterious cave. Since then, a pair of villagers crept into its depths and emerged on Isola’s western shore. Upon their arrival, they discovered children — alone, hungry and filthy. Your task is to help them survive, teaching them to become farmers, builders, scientists, healers and, eventually, parents themselves.

As with Virtual Villagers, The Lost Children offers a persistent world. Even when you’re not watching them, your islanders continue their daily activities of eating, drinking, fishing, planting crops, gathering food, building and repairing structures, doing laundry, making babies, and eventually expiring. Take a break and return a few hours later, and you’ll find your villagers have been busy. Some will have improved their skills, others will have given birth and a few may have kicked the bucket. They may have depleted their food supply, as well. Thus, it’s best not to leave them unattended too long.

Not everything, however, is the same. Some technologies have been replaced by others. For instance, Farming, Medicine and Science are intact, but Engineering, Exploration and Culture supplant Construction, Fertility and Spirituality. As for skills, Parenting has replaced Breeding. And, while you still have 16 puzzles to solve, they differ on the west of Isola.

New features are prevalent, too. Children now resemble their parents and do more than gather mushrooms. They acquire collectables — Butterflies, Shells, Beetles and Pebbles. New events randomly occur, islanders visually age, various stews can be concocted and illnesses are treatable in a tropical hospital.

Play mechanics remain status quo. For a quick description, click on an inhabitant and their name, skill and current action are displayed. For additional stats, the Details screen lists age, gender, health, likes and dislikes, if they’re nursing a child, and their skill progress in Farming, Building, Research, Healing and/or Parenting.

Influencing the behavior of your villagers is easily handled via the mouse. For instance, to teach one to fish, pick them up and drop them in the ocean. It may take a few tries, but eventually it will "sink" in. In like fashion, to instruct them how to build, simply deposit them onto a hut or other structure. Plunking them down at the research table will cajole them into researching. All skills, including procreation, work in the same fashion. However, on occasion one of your little village people just won’t cooperate. In this instance, see if you can find a skill that suits them better.

Also, don’t expect immediate results. Even running at double speed (options are Paused, 1/2 Speed, Normal and 2x Speed), growing your village takes time. Frequently, to accomplish one task, your little proteges will need to complete another first, or your tribe may need to advance a level or two in one or more technologies. So, be patient. Check regularly to see how they’re faring, but take advantage of the relaxed play-style. Invest your time elsewhere (even playing another game) while your villagers go about their lives.

Virtual Villagers: The Lost Children is as addictive and enjoyable as its predecessor. You quickly become attached to your tribe mates, taking joy in their accomplishments and sorrow at their demise. Isola’s attractively rendered, and its music and sound effects lend life and charm. Replay value is high, as well. In fact, you can play several games simultaneously if you choose.

Still, a few weeds infest this paradise. The ability to zoom in and out (via the scroll button) is needed, some puzzle solutions are rather ambiguous, and the ability to group and move several villagers at once would relieve some tedium. Plus, the screen scrolls too slowly when trying to locate a villager or transport them to a new location. Often, I lost a collectable because it took too long to escort a child to collect it before it disappeared.

In the end, Virtual Villagers: The Lost Children provides an engaging, entertaining and rewarding experience. It may not appeal to those seeking instant gratification, but it should to almost everyone else. Actually, if you’re not careful, these virtual villagers will easily distract you from real-life activities like eating, sleeping and…well, you get the picture. It won’t beat a trip to the Cayman Islands, but it will warm your heart.