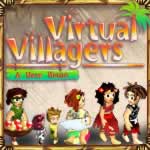 Rewarding the little megalomaniac that lives inside all of us, the talented folks at Last Day of Work (coolest name for a company ever?) has created Virtual Villagers, a “life simulation” if you will, that challenges gamers to manage a tribe of island castaways.

Your goal is to help these villagers thrive by helping them eat, build shelter, stay healthy, mate, work and evolve into a more advanced civilization. A larger goal is to explore the island and discover the hidden story behind it. And will you find a way off? Would you want to leave paradise?

Similar to the LDW’s last game, Fish Tycoon, Virtual Villagers is unique among downloadable casual games because it takes place in real-time; the events in the game go on even after you’ve turned the game off (unless you “pause” the game).

After the opening animation that shows how these people washed up on the fictitious island of Isola, gamers must begin working on the bare necessities, such as collecting food for the tribe. This is performed by left-clicking on a villager, which picks him or her up, and then dropping them on top of a bush. It may take a few tries but if they’re adept at foraging, they’ll begin collecting berries.

Similarly, mating is performed by dragging a male onto a female, or vice-versa, and seeing if they get along enough to mate (if real life was only this easy!). If they click, they’ll walk inside a hut and a stork will bring them a baby. Sometimes it doesn’t work. For example, poor Moki (and his receding hairline) had trouble with the ladies as they’d run away when I paired them up. Ouch! Not good for the ego.

Discovering and adopting new technology is key to survival on Isola. Points are amassed throughout the game for researching new technology, which can then be spent in one of many ways, such as construction, farming, fertility, medicine, and so on. Unlocking new technologies and advancing up through the stages within each one proves to be one of the more fun game-play mechanics in Virtual Villagers.

Another key part of the game – besides nurturing your little villagers and helping them perform everyday tasks – is solving the 16 main puzzles (called “milestones”), which may be to build new structures, learn to find new food, and so on. As with unlocking new technologies, these puzzles also cleverly dangle a carrot in front of you.

Plus, because Virtual Villagers is a “persistent” game that carries on even when it’s turned off, players undoubtedly grow attached to their tribe and want to visit them often to see what’s new with them – and what surprises lie in store. Players will also be able to make decisions when booting up the game such as “Duto was walking on the beach and found a mysterious crate. Should he open it or leave it alone?” We couldn’t resist the temptation and were pleased with what was inside: juicy steaks for the entire village! At other times, players will face unpredictable island events, such as a natural disaster, and will need to face the problem to keep your growing tribe alive.

Lastly, it would be remiss not to mention the cute graphics and outstanding music and sound effects as it all helps keep gamers immersed in the adventure.

Not much to complain about with this game, except for the occasional feeling of “um, so what should I do next?” (this was also a common question among players in a Virtual Villagers chat room). Plus, controlling all of the villagers probably could have been handled a little more efficiently by using the right-mouse button in some ways instead of relying on the left button to perform all functions.

Minor shortcomings aside, gamers in search of a unique and addictive downloadable adventure – especially those who’d like to play God for a virtual thrill – won’t be disappointed with this wonderfully crafted game.