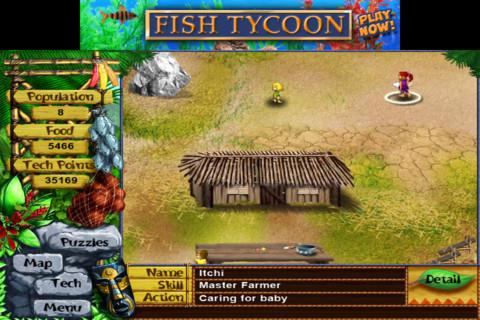 Virtual Villagers: Origins brings a casual classic to iPad, though it feels a bit behind the times

Virtual Villagers: Origins boils the classic Virtual Villagers series of simulation games down into a digestible, freemium game you can play on iOS devices. If you’re not familiar with the series, then it’s best described as a line of “god games” where you try to build a tiny village that supports only a handful of people into a happy civilization, while investigating secrets in the landscape around you. Villagers can be trained for specialized skills that become more valuable as your civilization’s population and technology levels increase.

Virtual Villagers: Origins on iOS plays very much like other versions of the game (and its many clones) do. This isn’t a freemium game where there’s lots of token interactions like clicking onto things to collect them. Instead, this is a game designed to run constantly in the background, with your villagers slowly going about their jobs and getting older as you go. A few things, like deciding to couple off villagers for child-rearing purposes, are totally in the hands of the player. Otherwise, this is mostly a game where you configure things to work a certain way, then check in every so often to see how things are going.

Because Virtual Villagers: Origins is necessarily a bit simplified from a PC game, mainly so it can be played with a touch interface, the game formula doesn’t work quite so well. Basic tasks like training villagers and keeping track of what everyone’s doing quickly become tedious. For instance, when a villager gets sick, the only way to figure out who’s ill is to tap on everyone individually. Likewise, managing a villager’s skills or getting information about what they’re doing involves swiping around your map until you find that exact person and clicking onto them.

The freemium aspect of Virtual Villagers: Origins is also implemented a bit awkwardly. The game is ad-supported, and to get rid of the ads you have to buy something from the in-game shop. Instead of having special classes of “booster items” you buy with cash-based virtual currency, you basically pay to cheat in Virtual Villagers: Origins. You can just buy big stacks of technology points and food, or enhancers that make your villagers generate them more quickly. There aren’t any vanity or customization items to buy, just ways of speeding up the game. 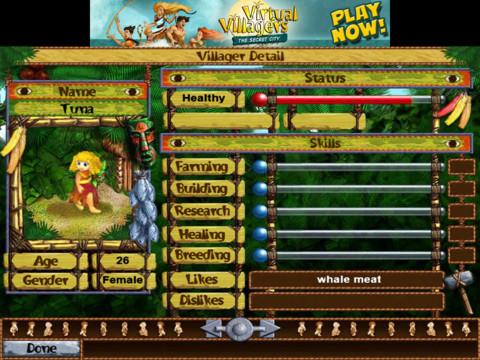 Perhaps the biggest issue with Virtual Villagers: Origins is that it’s not a terribly attractive game. This isn’t something that really hurts the similar-looking PC versions, because you have a fairly powerful interface to use to manage your villagers. Origins lacks that, on top of not really feeling like it’s making the most of what iOS has to offer in terms of graphics and sound. Virtual Villagers: Origins is a fine way to play around for a bit, but the hands-off gameplay is probably not going to appeal to the usual freemium crowd on iOS. It’s still worth a look, though.