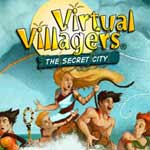 Once more Isola beckons, luring you back to its sun-drenched shores in this third installment of the Virtual Villagers series. And, like its predecessor, Virtual Villagers: The Secret City deposits your fledgling tribe on a new part of the isle. This time, however, you begin in the ruins of a once-great city to the north, exploring, rebuilding and repopulating while unraveling its numerous mysteries.

As with the first two chapters in the saga, this latest excursion into paradise serves up a familiarly persistent game world. Daily activities such as eating, drinking, washing, gathering food, building and repairing structures, making babies and, eventually, severing this mortal coil transpire whether viewed or not. Depart Isola for several hours and, upon returning, you’ll discover your villagers have been busy. Leave your tribe unattended too long, though, and you may find them dead from starvation.

Much of what you’ve come to expect of Virtual Villagers remains intact, including play mechanics. Click on a villager and their name, skill and action are displayed. Additional stats, on the Details screen, convey age, gender, health, likes, dislikes, time remaining if nursing a child, and progress in the skills of Farming, Building, Research, Healing and Parenting.

Influencing behavior hasn’t changed either. Teaching a tribe member to “build” is as simple as dropping them on a structure. In like fashion, depositing a villager at a table will encourage research, plunking them in the ocean will persuade them to fish (you’ll have to rid the ocean of sharks first) and “nudging” them into a tribe mate of the opposite sex will engender procreative abilities. Nonetheless, villagers aren’t always successful on the first try. Several attempts may be needed, but eventually the behavior will stick. On the occasion one of your little namesakes just won’t cooperate, try a different skill.

Conversely, some things have changed in The Secret City. Real-time weather now includes clouds, sunbeams, fog, thunder and sudden down pours. The latter cause villagers to abandon tasks and scamper for cover, as well as play a role in solving a few of the game’s 16 puzzles. You also have a chief to rule your tribe and contribute to your village’s growth, and several new food sources to stave off hunger. As before, potions spice up the game’s action, as well as provide solutions to several conundrums.

Children, who still resemble their parents, have four new collections to gather – Turtle Shells, Coral, Tablet pieces and Feathers. Additionally, the online leader board has been replaced with an in-game achievement system. Awards, ten in all, include Child Prodigy (reach master before age 18), Jack of All Trades (master all five skills) and The Doctor Is In (cure 30 villagers of disease). Of course, new random events appear sporadically.

As with its forerunners, results aren’t immediate. It takes time to grow a village, even running full-tilt (speed options are Paused, Slow, Normal and Fast). Accomplishing one task often requires completing another first, or advancing a level or two in one or more technologies. So, bide your time and take advantage of the game’s relaxed play. Avoid the tendency to micro-manage your tribe by the minute. Instead, take frequent breaks from Isola and get on with the rest of your life while your villagers go about theirs.

Virtual Villagers: The Secret City is addictive. If ant colonies enthralled you as a kid, you’ll enjoy this diversion even more. In short order, you’ll become attached to your villagers, relishing their achievements, being frustrated at their failures and grieving their death. Isola’s world is a charming one, visually and audibly splendid. Replay value is high, thanks to variables like factions and events. You can even run several games simultaneously (though, one of your tribes is bound to suffer neglect).

But, Isola is not without its rocky shores. Zoom capability would be a welcome feature to augment map view, as would the capacity to group villagers by task. An “Extra Fast” game speed would assist for speeding through some of the more tedious aspects of play. And, the ability for children to gather collectables without assist would be a thoughtful extra. An increase in resolution wouldn’t hurt either.

While Virtual Villagers: The Secret City won’t appeal to casual gamers seeking a quick fix, it offers an engaging, entertaining and rewarding experience for those willing to make the investment. But, beware! This latest tropical delight may make it virtually impossible to manage the rest of your life.