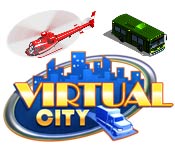 Games like HipSoft’s Build-a-Lot not only resurrected city simulations, popularized in the early ’90s with games like SimCity, but it raised the bar high for others who want to take a stab at this genre. G5 Entertainment’s Virtual City does a good job at delivering a challenging and attractive city building game – but it’s not a flawless sim either.

Your goal is to complete a number of increasingly difficult tasks to ensure the growth, prosperity and happiness of a city. There are some building elements found in the Build-a-Lot games, but Virtual City focuses a bit more on the maintenance of that city, which includes deliveries, recycling, trading goods with other cities and handling natural (and not-so-natural) disasters that could impact your city’s residents. Beginning with Colorado, players will unlock new states on the U.S. map, including New York, Montana, California and Michigan, totalling 50 levels in all. (Along with the main campaign is a Free Play mode you can tackle on five large "sandbox" maps to see how well you can do.)

In most missions, the top-down, three-quarter view of your town lets you see the residential, rural and industrial areas — and in some cases your goals will tie all of these areas together. For example, you might be asked to bulldoze some trees in order to build a bus terminal to transport citizens from one place to another. This would be performed by clicking on the Build tab at the bottom, and then Destroy (not a logical place for it as it’s an opposite) and after clearing the land, you need to place down a bus terminal and a bus or two, and select the path in which it travels (e.g. to the mall).

Other objectives might be to achieve a certain population (by building more homes and creating more job opportunities), environment rating (by building a recycling plant, upgrading buildings and adding more greenery) or income (by selecting truck routes between mills, dairy and grain farms, bakeries, supermarkets, and so on). Eventually, you’ll be building fountains, theaters, hospitals, stadiums, yachts and rocket ships; setting up mass transit systems (and building a tech station to automatically fix broken trucks or trains); and deal with unexpected problems, be it recessions, population crises and earthquakes.

The tabs at the top of the screen show a running tally of your progress, including numbers for Income, Bank Account, Environment, Happiness, Population and Time. Whenever you meet one of your three to eight goals per level (e.g. "Upgrade all production buildings," "Decontaminate all houses" or "Obtain an Environment rating of 500"), it’s crossed off the list.

While the tutorial does a good job over the first few levels, it misses out on a few key instructions, though, and as a result, you’re either left to fend for yourself or must restart the level from scratch. Too bad there’s not a button you can click to give you a hint on what to do next. For example, in level 5 where you must trade pies for cosmetics with a neighboring city, I couldn’t figure out why trucks wouldn’t bring pies to the other town (though importing lipstick was just fine). I figured out the issue: I had to set up pie deliveries between the mall to the other city instead of from the farm, for some reason.

On a related note, the game doesn’t remember your last action, so if you need to create 10 houses, for example, you must keep clicking the Build tab to select Small House each time instead of simply clicking on the ground in succession (which would have been more convenient).

I also found a couple bugs — or at least they appear to be bugs — related to fixing a collapsed tunnel without having enough cash to do so and another one that challenges you to collect trash, though the game wouldn’t let you build the trucks to dispose of the garbage. In another instance, I was supposed to collect $5,000 in income but even with a couple of busy malls, I wasn’t able to get more than $4,200.

Despite these issues, the game has a lot going for it, including many varied missions, great graphics and animation, and I did like the fact players can earn awards for reaching certain milestones — such as "Transport 200 items to a shop" or "Construct an Airship." Plus, it’s possible to earn Investment Points to spend in the Research and Development lab on new buildings to help you along the way.

Overall, Virtual City is a very good but not extraordinary game. Hopefully the developers at G5 Entertainment can fix these aforementioned issues, sooner than later, to win over casual gamers in search of the next big city sim.