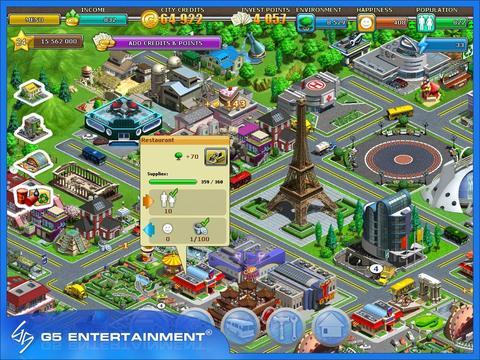 While Virtual City Playground is certainly a competent freemium offering, players of the original game will likely be put off by the severe changes that were made to the core mechanics and gameplay. And while the freemiumization of a franchise means it will be free, it does not necessarily mean it will be a better experience.

Virtual City Playground is a sequel of sorts of the original Virtual City that released last year on the iPhone and iPad. Upon launching the game, I was greeted with a small tutorial noting how to play and immediately noticed that this was not exactly the Virtual City I used to know and love, this was now a different animal.

The core ideas remain the same as in the first game: you run a city, and managing the garage and delivery truck remains where you’ll be spending most of your time. This, however, is where the problems first arrive and the brick wall of fun was hit. One of your first goals is to get a production line of pies running. In order to do that, you have to buy a wheat farm, dairy farm, a grain mill, bakery and a shopping mall. The problem is that you don’t have enough money to get all of these buildings at once. You will have to wait days to make enough cash to build just one of these.

You see, the way the economy works in Virtual City Playground is completely off kilter from the original game. In the original Virtual City, each delivery of a good to another building would net you an easy $400-$600 depending on which good you were delivering. In Playground, you’re looking at $10-$25 per delivery. On top of that, buildings also cost a whole lot more to purchase this time around. A bakery will cost you around $13,500, whereas it used to cost only around $5000.

A portion of these changes I can see as necessary. The original Virtual City game was mission based, and had you traveling all over the country to manage different cities almost every time. With Playground, you are stuck with the same city so you have to build it from the ground up and keep it running over time.

There are still missions this time, but they do tend to be a bit more simplistic. Instead of delivering a certain number of pies or cosmetics to the shopping mall, the objectives seem to center around building structures and routing trucks between them. 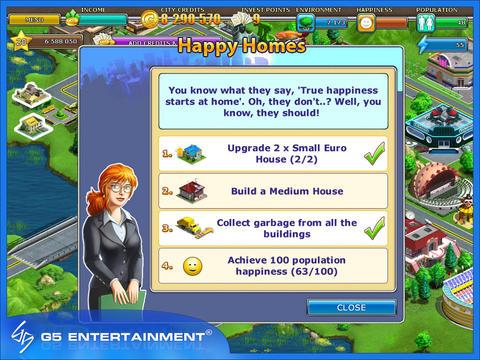 In the end, Virtual City Playground is certainly an interesting look into what can happen when you almost literally take an existing game and convert it into a freemium experience. Any other game I’ve seen up to this point has been a spin-off or completely new game based on another. Unfortunately, this version of Virtual City did not wet my whistle for more of the fun I was hoping for in the series. Unless you enjoy waiting days to progress in your city, I would stay far away from Virtual City Playground.