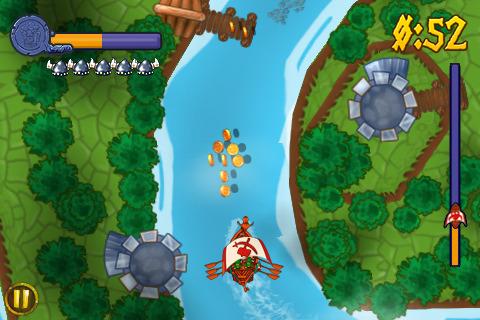 Join a crew of angry Scandinavians for a spot of rowing

Today we tend to think of the Vikings as a no-nonsense, remarkably direct race who nonetheless displayed a high level of ambition and skilful seamanship. Appropriately enough, that description could be applied to Vikings Row, a fine new casual game from I-play based around a boat-load of the Scandinavian warriors.

Fortunately for the Apple censors, there’s none of the murdering and pillaging that has come to be associated with the Norse tribe here. The tone is jovial, the graphics cartoon-like and our brave crew never sets foot outside of their boat throughout the game.

Like many casual iPhone games over the past year or so, the goal is simply to get to the finishing line as quickly as possible, avoiding hazards and collecting coins along the way. The way in which you do this is quite unique, however. Rather than using a virtual D-pad to steer your ship through each course’s treacherous rocks and fast-moving rapids, you have to mimic the motion of rowing a real vessel.

Going forwards means sweeping both thumbs down the screen simultaneously, one either side of the boat. Steering left is a case of using only your left thumb, and ditto with your right. Braking and reversing can be initiated, as you’d expect, by pushing both thumbs up the screen, while moving your thumbs in the opposite direction to each other enables tight turns.

The entire game rests on this simple but remarkably flexible control system. As you negotiate each twisting waterway, collecting enough coins to reach the bronze, silver or gold medal awards for the levels, you’ll need to employ each and every one of these skills under the most trying of circumstances.

While the controls are beautifully responsive, an appropriate level of delay and inertia affects them. After all, you’re working your way through water, where everything takes that little bit longer to react. You’ll need to employ a good sense of touch and a fair amount of fore-thought as you tackle each tight turn.

Your progress is made much tougher by a range of tricky obstacles. There are spiky rocks which, when collided with, rob you of a crew member – the game’s brutally literal life system. Making such collisions all the more likely are various wild-water rapids sections, which push you onward at a startling rate. They’re great for making swift progress, but just you try steering out of them in a hurry.

Joining theses rapids are a number of whirlpools, which don’t so much threaten you directly as slow you down, twisting your ship around like it’s about to be washed down a plug hole.

Fortunately there are bonus pick-ups that help you out at key points, such as the hourglass that tops up your timer or the shield that makes you into an indestructible battering ram for a few precious seconds. This latter power-up enables you to take some satisfying short-cuts by smashing through walls of spiky rocks. 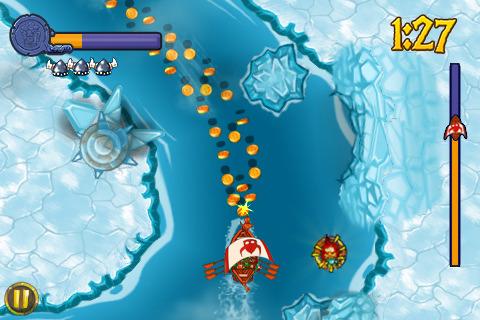 Indeed, Vikings Row is packed full of interesting diversions that tempt you away from the main path (which is always made clear by arrow-shaped rock formations and a constant breadcrumb trail of coins). Whether you choose to take them or not is entirely optional, but you won’t secure a gold medal for many of the levels unless you take at least one or two of the treasure-filled detours on offer in each.

Vikings Row‘s relentless rowing gameplay does take its toll with sustained play – both on your thumbs and on your will to continue with the game. Fortunately the latter is partially alleviated by the nature of the levels, which mix in relatively straight, rapid-fuelled sprints among the usual twisty-turny examples. Nevertheless, this is a game for brief bursts rather than extended stints.

Each brief burst will be extremely entertaining, though. Such a simple game lives and dies by its control system, and Vikings Row‘s is as fresh and as subtle as they come. The Vikings might be long-gone, but this new digital invasion should be welcomed with open arms.