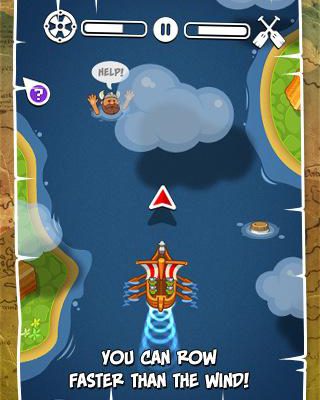 Just sit right back and you’ll hear a tale, a tale of a viking ship… that sailed the seas and plundered ports, all in the same trip! Luckily you won’t be getting marooned on a deserted isle in Viking Tales: Mystery of Black Rock since you’ll be squarely at the helm controlling the ship the whole time. And by the time you’re firing off the cannons, you’ll know this isn’t some standard three hour tour.

The main gameplay element of Viking Tales: Mystery of Black Rock is rowing and steering the ship. Anyone that’s ever been in a canoe probably knows the very basics of controlling a boat via paddle. If you paddle on the left side of the ship, it turns right… and vice versa. Swiping on either side of the ship works the oars on that side, guiding the ship as expected. A swipe down the middle puts even strength to both sides and swiping down both sides at once acts as a boost.

Proper implementation of these rowing controls is paramount to guiding the ship around in such dangerous waters and definitely takes some time to get the hang of. In the first few missions I spent more time than I care to admit swiping the wrong direction while steering and veering WAY off course. This meant a lot of stopping and backing up (which also took getting used to) but after a bit I was sailing the high seas like I had been doing it my entire life.

Quick rowing is important when you’re tasked with saving people or treasures that have fallen into the ocean (especially on timed missions) or more important when you’re chasing (or being chased by) an enemy ship. In those cases tapping the enemy fires the canons and injects a tough element of swiping while tapping to continue the pursuit while firing. It’s satisfying when you do it well.

All of the missions are pretty varied in what you need to accomplish, and all have medals associated with them to grade you on your performance. This gives you a reason to replay some of the older missions since you always know you could do a better job. I got a kick out of the names of the levels too, each with some clever pun like “I, Rowboat” or “Herring Hijack.”

The visual style of the game reminds me of the old comic strip Hagar the Horrible, in that this is definitely a cartooned up version of Viking history. This approach helps the game look fantastic even though it’s not up to the retina display resolution. Even without that the game looks great both in-game and even in the menus. 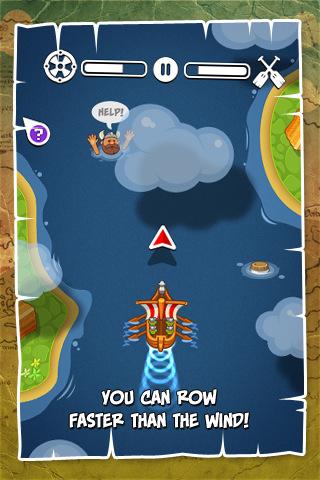 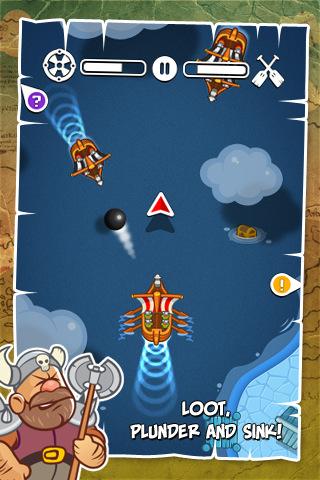 Sadly the game doesn’t offer completely problemless plundering, as there are a few issues that do detract from the overall experience. I’d really have liked to have seen some sensitivity customization options for the controls. As it stands the steering feels a little off, and being able to tailor that would’ve helped the feel of the game greatly. Not a deal breaker, but it would’ve been nice.

My larger complaint though deals with collision detection. It’s a little overbearing and I ran into numerous situations where I was clearly small enough to fit through a gap but kept colliding with the obstacles anyway. Given the style of game a little leniency, in this department would’ve gone a long way. The overzealous collision detections do make the game more aggravating that it should’ve been.

Overall I really enjoyed my time with Viking Tales: Mystery of Black Rock, despite the aforementioned collision detection issues. The variety of the missions is nice, and the visuals really suit the game well. It’s no landmark or memorable title, but to kill a few hours one could certainly do much much worse than this little Nordic getaway.