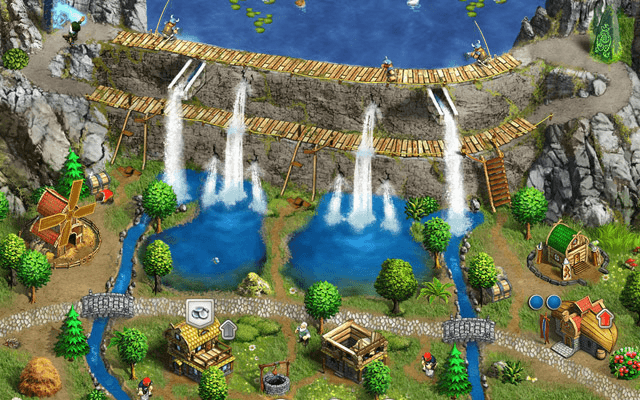 Despite its intriguing storyline, Viking Saga feels a tad cliche

From the games of the Adelantado Trilogy, to Roads of Rome and even Northern Tale, it’s safe to say that publisher Realore has a firm grasp on the time management genre. Fans of those previous games have a new option in Viking Saga, but as you might expect, this one comes with some slight differences that make it both better and worse than other “identical” games.

Viking Saga is immediately striking with its bright, crisp graphics and fully voiced main cutscenes. Many time management games include very little in the way of storyline and instead launch players straight into the “meat and potatoes” of the experience. Here, you get an in-depth storyline surrounding a cursed Viking King that wishes to free himself from his curse by sending his son to deliver an old ring to a troll-like creature in a faraway land. This journey takes players through lush forests, barren snow-capped mountains, and more, as you face tons of obstacles all along the way.

Levels contain sets of fairly expected tasks that see you balancing the use of resources to collect new items, clear paths, repair roads, and more. NPC characters also play a role in some stages, as you may need to go on fetch quests for secondary items, or repair very specific items on each level’s map in order to get them to talk to you and trigger your next action. 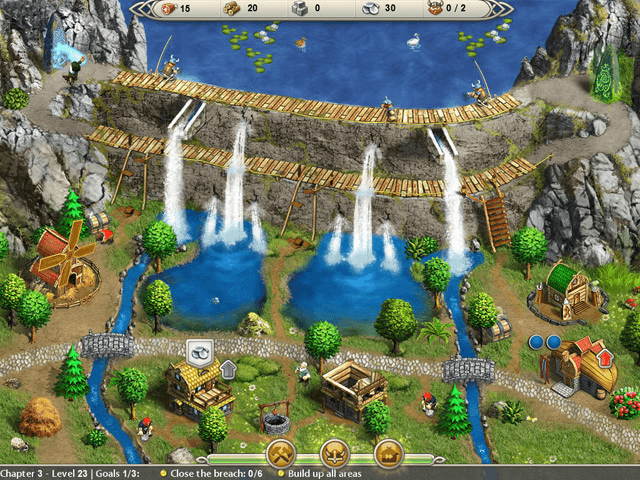 While you’re limited to just a handful of workers on each stage, additional workers can be recruited by spending materials in bulk inside your “Base” building, and you can queue available actions far into the future, so long as your workers have a path to get to those items, and you currently have the resources necessary to interact with them (buildings require wood to construct, for instance). Again, the graphics in each stage are quite lovely, but the user interface is less than friendly.

The goals for each stage are presented in very tiny font at the bottom of the screen, while the timer (if you choose to play with one) is even smaller and placed in the corner. Also resting at the bottom of the screen is a power-up bar, which fills automatically over time. As it fills, it unlocks progressively better temporary power-ups. One may see your workers walking around the map much faster than before, while another gives you 2X the materials when tending farms (for food), houses (for coins), or saw mills (for wood), as examples. These items must be clicked on manually, giving you an option for either waiting to earn a better power-up as the bar continues to fill, or spending it all right now on something that can help you out immediately. 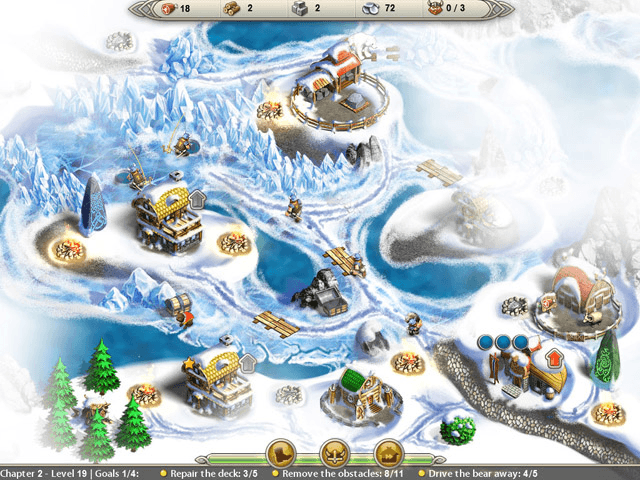 Again though, with such tiny font and an odd placement, it’s hard to keep glancing to the very bottom of the screen to see your progress, so you’ll likely miss out on available power-ups that have been waiting for you, but their icons are too small to keep track of.

On top of that, while the sound effects and music in Viking Saga are really nicely done, your Viking workers shout out the same few voice clips after every two or three clicks. By the time you’ve reached stages containing three or more individual workers, this repetition of the sound effects is really annoying and too much to bare. Unfortunately, you lose the weather and tool sound effects as you turn off those character voices, so it’s an all-or-nothing ultimatum.

Ultimately, while Viking Saga‘s action queuing, bright and colorful graphics, and interesting storyline are definitely welcome additions to this time management experience, the rest of the game is all fairly standard. The core gameplay and environments look and feel nearly identical to more than a handful of previously released games, and the annoying sound effects mixed with the skewed menu system keep this one from really standing out in a crowded field.