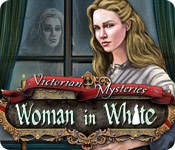 Got a hankering to do some good in a light, refreshing hidden object game that has all the taste but just half the calories? Then you, my friend, need to try Victorian Mysteries: Woman in White, the new adventure set in the 19th century adventure that offers a lot of simple but satisfying gameplay, all wrapped up in an exciting package of deceit, betrayal and love.

Victorian Mysteries: Woman in White is a period piece based on the 1858 serial “The Woman in White,” which was later collected into one of the earliest mystery novels ever to be published, following the adventures of two wealthy half-sisters, a good-hearted art tutor, some thuggish aristocrats and the ghostly woman in white who brings them all together. The game’s opening cinematic promises a sinister, highly-polished experience, and that’s right on the money. Woman in White looks great, with sharp graphics that create a lifelike environment with enough of a fanciful edge to keep things interesting, and the music is subtle and spooky, evoking just the right amount of dread. Voice acting is plentiful and generally good but not quite as consistent, and a couple of characters, like the Italian Count Fosco, are downright dreadful.

Like many hidden object games these days, this one can be played in either “casual” or “expert” mode, with casual mode offering shorter recharge times for the hint and skip options, and “sparkles” to highlight areas where hidden object searches can be found. In another nice touch, the game also lets players know when rooms are cleared, flashing a message saying “There is nothing left to do here” when all items are found and all puzzles are solved or, occasionally, when it’s simply not the right time to be in a particular location.

The video game retelling of “The Woman in White” is predictably thin but nonetheless does a very good job of spinning the tale. An in-game journal keeps track of the plot as it unfolds, with separate sections for story, characters and even a family tree, complete with juicy closet-skeletons like “Forbidden Love” and “Book of Death.” The added details contribute to the fun factor by fleshing out the story with background information about characters from the book that don’t make an appearance in the game. There’s also quite a bit of optional dialog throughout the game that bolsters the narrative even further.

Victorian Mysteries: Woman in White is one of the easier hidden object games I’ve played in awhile. Puzzles are few and far-between and generally so simple that the “skip” button rarely even gets a chance to light up, while the tricks required to move past certain obstacles in the game are sometimes so obvious that the solution is apparent before the problem even begins. Hidden object searches, on the other hand, are a real challenge. Objects are well-defined but the appropriately creepy backdrops tend to be cluttered with numerous small, distracting items – as all good hidden object scenes should be. The net result is a game that moves ahead at a quick clip while still providing plenty of variety.

Incomplete hidden object searches are highlighted in each game screen but puzzles and some uncollected inventory items are not, and that means pixel hunting. The notifications that rooms have been completed helps minimize the impact and it was never a real stumbling block, but as a major aspect of the game it’s still sometimes an annoyance. Woman in White is also a bit on the short side; thanks to its relative simplicity, experienced players will probably be able to power through it in little more than a couple of hours, although taking time to read about the many characters and the secrets swirling around them, which I’d strongly recommend, will certainly pad things out a bit.

But overall, Victorian Mysteries: Woman in White is an excellent game. It starts strong, finishes strong and never overstays its welcome. Puzzle fans may find it a little lightweight, but the fast pace, engaging story and exceptionally high level of production make this one a winner. If you’re a hidden object fan, this is one game you won’t want to miss.