Might be too challenging and lengthy for some players.

Puzzle games are meant to be challenging and confounding, but recently they’ve been making my brain get all twisted in a couple of different ways. The first, most obvious culprit, are the in-game puzzles themselves. Second, trying to figure out how the heck developers make these games. Not in the technical 1’s and 0’s way, but more in the design. How do you come up with a tricky puzzle? Work backwards? Trial and error? I have no idea. When a game comes along as elegantly designed as Vessel, it basically just sends my head popping off my shoulders.

At a time when real-life factory workers are being rapidly replaced by automated robotic mechanisms, leave it to the steampunk world to think up a story revolving around animated fluids replacing people. These animated liquids are known as “Fluros,” and have started running amok in the factories they were intended to help. As their inventor, M. Arkwright, it is your duty to restore order throughout this world by reigning in the Fluros. Much to your surprise, your invention has taken on a life of its own making it more difficult to get things under control.

Vessel is another entry into the growing selection of indie PC 2D platformer puzzle games. You’ll spend your time manipulating different, unique liquid elements to solve puzzles and advance through the rooms. You’re given enough guidance to encourage freedom in figuring out the world for yourself, which leads to many “a-ha!” moments. The mechanics of the game are slowly introduced, allowing you ample time to adapt to each new one before throwing too much at you.

With a multitude of pipes, gears, levers and chains you’ll find yourself immersed in a gorgeous, steampunk-inspired world, complete with M. Arkwright sporting a set of goggles on top of his head. Everything runs extraordinarily smooth and responsive, which is pretty impressive considering all the physics being crunched through the engine. The music score is reactive in context to what’s happening, too, and the sound effects are simple but really well incorporated. 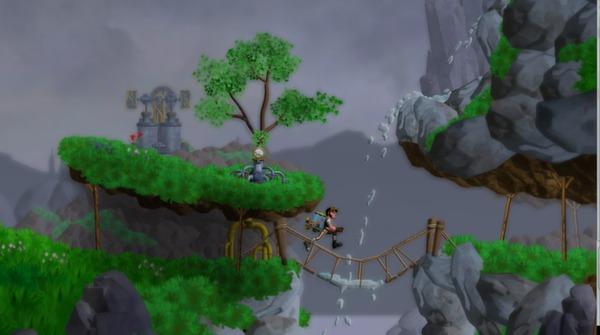 Vessel is certainly a lengthy game that gets much harder after you’re introduced to all the mechanics. The puzzles are extremely well thought out and therefore very satisfying to solve, but the difficulty presented here will definitely turn some folks off. That said, by time you get to the point where the game gets really hard, you’ll have more than gotten your money’s worth. Though I’m one to applaud the lack of hand-holding from the developer, some people may be turned off by not having things laid out for them.

Developer Strange Loop Games spent three years creating Vessel, and it’s safe to say that all that work has paid off. They’ve created a challenging puzzle platformer that will surprise, challenge and excite you. For only $14.99 you’ll get plenty of game for your money, much more than many high profile “AAA” have offered in recent times. All of the individual pieces that a lot of games could benefit from having any one of come together so fluidly (sorry, I had to) that you’d be a fool not to pick this one up.