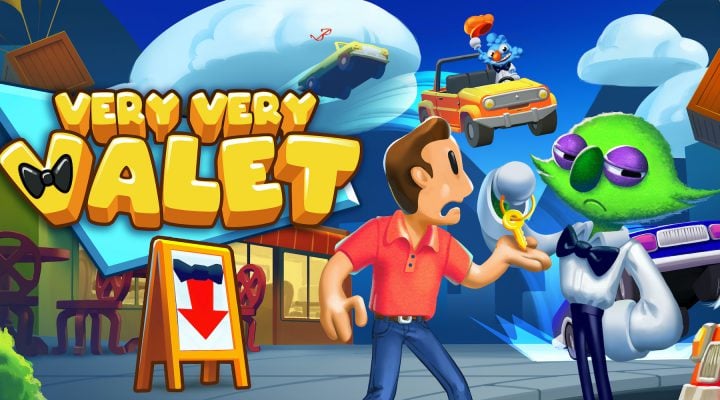 No fun without friends

Some framerate issues when the action gets hectic

A game that could very easily fall into the trap of being labelled ‘just another Overcooked,’ Very Very Valet feels surprisingly fresh. Yes, it cribs from several titles – but it makes sure to never feel too cliched or formulaic.

Revolving around picking up and parking cars from a certain points in small one-screen stages, the complication comes from when the drivers want them back.

Leave it too long to pick up or drive back your customer’s cars – the time you have remaining on each is indicated via a slowly filling meter – and you’ll lose them forever.

You can play as a range of lovable muppet style creations, and can jump around the arenas via a button press – but also a range of environmental additions, such as springs and ramps.

If this sounds fairly simple, you’re right. When it comes to progression and the core gameplay Very Very Valet keeps things streamlined, only adding small wrinkles as you progress.

There’s a decent number of levels, and your progress is occasionally halted due to the requirement to have collected a specific number of stars – with three available in each stage. Naturally you’ll only get them all if you don’t lose a single car.

What makes Very Very Valet work so well are two factors. The first is that it’s great fun with friends. Playing alongside someone else is enjoyable enough, but it’s when you have four people racing around it’s manic yet never overwhelming.

Adding to the chaos are the controls – which are interesting, to say the least. When you’re in a vehicle pressing a direction on the analogue stick pushes it that way. However if the car is facing the wrong way to where you’ve directed the stick it will reverse.

This system is a strange one, and we struggled to get to grips with it completely – but somehow that almost feels like that was the point all along. It adds to the game’s unpredictability without feeling too messy or frustrating. An impressive feat indeed.

Very Very Valet is perhaps a touch overpriced for something you’ll only really enjoy with friends, but if you do happen to hold regular games nights then this is a title you’ll want to seriously consider adding to your roster.