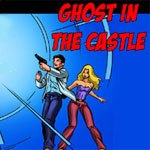 Vera Blanc: Ghost in the Castle is a great follow-up to the original title, but lacks the charm and finesse.

Vera Blanc is back on the case in Episode 2: Ghost in the Castle. Playing out in a similar style to its predecessor, Full Moon, number two sees Vera solving a new crime with her special mind-reading abilities.

As with Full Moon, there’s an interesting story on offer with great comic book visuals and a fun Hangman-style minigame. The overall quality of the text isn’t as great this time around, but there’s still plenty to enjoy.

A quick recap for those who are not familiar with Vera’s tale: As a child, she is diagnosed with brain cancer and told she only has six months left to live. Her father, a famous multi-millionaire, uses his wealth to get Vera an extremely experimental operation. Afterwards, her cancer is cured but she can also read minds as a side-effect.

Ghost in the Castle sees Vera taking off with her partner Brandon Mackey to investigate a ghost story in a small town in Italy. As with Episode 1, the visuals are very striking and give the whole thing a lovely feel. Certain cutscenes are displayed as comic book panels, while other sections show whole scenes for you to explore.

You’re presented with a town map, which shows all the areas you can visit. Dialogue options are then given, which can lead to different outcomes. While the action is more or less linear, the game gives a real feeling of freedom and makes you believe that you’re making important choices.

There aren’t as many mind-reading minigames this time around, which is a shame as they’re rather fun. Instead, more of the tedious memory games are here to bore you for a few minutes at a time. They don’t ruin the game as such, but they’re definitely a nuisance.

While the story is once again very well done, the dialogue isn’t so hot, and can leave you cringing. Some of the scenes are especially sexual this time around, with Vera stripping off to her underwear needlessly numerous times. It feels rather out of place and completely unnecessary.

Most of the issues we had with the original episode pop up again, the worst culprit being the random deaths. Now and again you’ll choose dialogue that is seemingly innocent, only to be presented with the death screen 30 seconds later. Fortunately you can scroll the mouse wheel up to rewind time and resurrect Vera, but it’s still quite annoying.

While it’s not essential that you play the original episode before delving into Ghost in the Castle, we’d advise that you do. Some of the storyline continues from the first part, and will be confusing for those who have not played it. This episode also throws you straight into the fray without much explanation as to how Vera’s powers work or how the game plays, so Episode 1’s tutorial is really quite necessary for beginners.

Vera Blanc: Ghost in the Castle isn’t as well produced as the original, but there’s still plenty of fun to be had, and those who played Full Moon will no doubt want to see how Vera’s story progresses. With around 2-3 hours of play available, this is a great continuation of the series and we look forward to the next chapter.