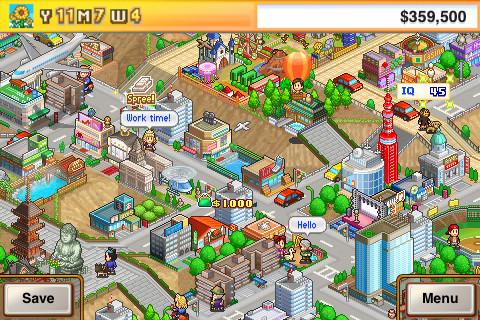 Some of my fondest gaming memories start with the Super Nintendo and SimCity. Building up cities and watching them grow and flourish was a fascinating process. With Kairosoft’s Venture Towns, you won’t be getting the same scale of building your own virtual world, but what you will get is the same addictive gameplay that has hooked you on other city-building games in the past.

If you have played Kairosoft’s other titles, such as the amazing Game Dev Story, you’ll feel right at home with the interface and overall style of the game, as it borrows heavily from previous efforts. The game does a decent job for the most part in getting you acquainted with how the game works (with one exception—more on that later). You’ll want to create vacant lots for potential residents to move into, shops for them to work and patronize, and offices for them to find employment at.

After you use some of your start-up cash to get the town rolling, you’ll want to spend time developing your residents by attempting to get them into new, higher-paying careers (which helps come tax time), as well as researching different kinds of shops to build in the city that help with transportation, entertainment, and so on. Because every task takes money out of your coffers, you will have to be careful not to get over-zealous in building too much too soon—or you will end up like me—spending a decent amount of time simply waiting for taxes to roll in so I can actually progress further in the game. Thankfully, while the game doesn’t stress this point that well early on (I was already in the red when it cautioned me on over-developing), it does do a nice job in throwing in a decent number of random events (like finding a “gold nugget” in the woods worth $100,000) that will get you out of cash ruts and back on solid financial footing. The wait, however, can make the game grind to a complete halt.

One other issue that the game has is with its odd stance on building rotation. Some buildings can only be rotated in one direction, while others cannot be rotated at all. I imagine this was done to cut down on art asset costs, but in some instances this can really screw up planning for different streets. If you can’t place a building where you want it, you’ll likely have to place it in another area of the map, build more roads, and use up valuable cash in the process. 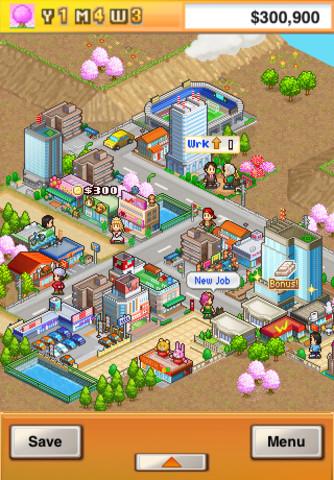 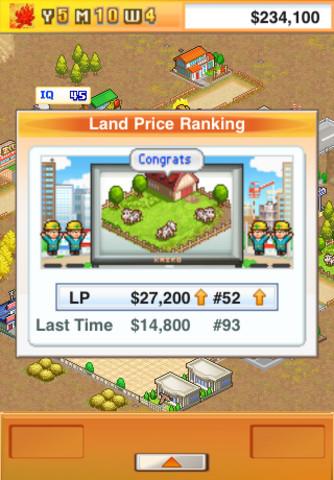 While I’ve been focusing on a few of the warts of the game, the real meat and potatoes of Venture Towns is simply watching buildings transform, and your town become more and more populated. To put it simply—progress. There is something about seeing a world grow, thrive and succeed that is simply addicting as heck to play.

For the price, you’ll be getting a very competent city-building simulator. There are hours of gameplay and a number of different maps to choose from for building multiple cities, so the value is unquestionable. Give this game a shot if you haven’t played a game of this style in a while.