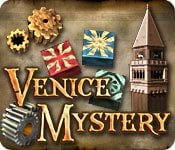 Fans of mah jong solitaire games or those obsessed with secret societies, such as the Illuminati, might enjoy playing through Venice Mystery, the latest puzzler from Gamgo and Big Fish Games. It may sound like an odd mix – but it works – but don’t expect the tile-matching game-play to be tied to the story in any way.

At the start of this game you read about the city of Venice, Italy, which is sinking at an alarming rate. The only way to save it is to unlock a mystery held by an Illuminati scientist who has created a doomsday device, which is the only solution to prevent this catastrophe from happening.

As odd as it sounds, you can help save the city by swapping tiles! Yep, similar to the popular mah jong solitaire games (also referred to as Shanghai in some parts), your goal is to match two identical tiles from a board in order to remove them, but the caveat is that they must not be blocked by tiles above it, therefore tiles on the edges or top of the pile are easiest to match. But unlike mah jong, Venice Mystery gives you six tiles at the bottom of the screen in which to match on the main board.

Your goal is to match tiles with the same pattern in order to reveal some keys, which are encased in a translucent red tile. When you find all keys on the level, you can continue onto another board, which will have another unique layout.

In order to rack up the most points, the game challenges you to click on a number of identical tiles consecutively to remove them from the board – but you must be quick enough to do so. If you can clear, say, four or five tiles, in one pass, then you’ll be awarded bonus points and see encouraging words splashed on the screen, such as “Fantastic” and “Amazing.”

Bonus “power-up” tiles can also be found and used, such as one that destroys a tile so you can access what’s underneath it. Others will let you see through tiles, swap two tiles, or shuffle all the tiles around, and so forth. The game also gives you a few “joker” tiles, which can be used as any tile you need it to be.

In order to mark their progress, players will advance through a map of Venice. Every few levels or so, a bonus mini-game has players looking at a painting, while at the bottom of the screen are three circles, each with part of the painting inside. Some may require rotating in a clockwise fashion until it’s right-side up, and when you’re done, you’re supposed to click on that exact spot on the painting to solve the puzzle. One of your goals in this game is to find all 13 lost paintings.

But wait, there’s more! After you solve the puzzle you’re treating to a Da Vinci-like diagram but with some Roman numerals on it and you’re supposed to turn a dial to the correct numbers – in the correct order – to unlock another piece of the machine to help save Venice from sinking. If you can’t solve this puzzle you can always go back to it at a later time after you’ve played more tile-matching games. This part of the game proved to be the most difficult part of Venice Mystery, which is otherwise a fairly simple game, even as you progress through the five dozen or so tile boards.

But the clever story, attractive graphics and two mini-games make this mah jong game an interesting download. Puzzle fans should at least play through the free trial to see if the mystery is compelling enough for them to keep clicking.

ZoomBook: The Temple of the Sun Review