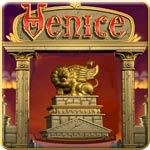 It’s not easy being PopCap Games. Sure, they’re one of the most successful casual game makers in the business – and deservingly so as they continuously publish critically-acclaimed and commercially-successful games. Need proof? How about Bejeweled, Chuzzle, Zuma, Insaniquarium, Feeding Frenzy, Bookworm Adventures and Peggle, to name a few.

But as a result, gamers grow to expect nothing but greatness from them each and every time. They’ve raised the bar not just for the industry but for themselves.

Venice Deluxe, their latest release, falls short of this greatness. It’s good – but far from spectacular.

In other words, it’s not Sgt. Pepper’s Lonely Hearts Club Band – it’s Please Please Me. It’s not The Sixth Sense — it’s Unbreakable. It’s not The Stand, it’s more like The Dark Half. Get it?

OK, on with the review.

Developed by Retro64 and published by PopCap Games, Venice Deluxe is an arcade-based puzzle game that challenges players to shoot shapes – such as a ring, star, vase, heart or coin — up a building so that it matches an open slot (silhouette) with the same shape. When the object fits its proper slot, it gets locked in place; when all the spots are filled for that part of the wall – which may be a rotating triangle with three spots, a circular wheel with five spots or a more horizontal piece with three spots – it disappears and lets you work your way up towards the top of the tower.

If you shoot a piece and it misses its target it will come straight back down towards you, or might ricochet off other pieces or parts of the building, but you must catch it before it hits the water or else you lose a life (this isn’t the case with other game modes).

Speaking of ricochets, much of the game-play after level 15 or so involves aiming towards slanted surfaces (bumpers) to reach hard-to-access areas, along with breaking apart stones to clear a path and shooting the pieces into little passageways that aim the object for you. Later on in the game there are locks (you need to fire the right shape to open it), baskets, chutes and more.

Part of the strategy is shooting an object, such as a ring, to the highest point on the building you can see – if it’s not obstructed, of course – which will likely cascade down to the other parts of the building and fill up multiple slots for you. If you can fill up multiple slots on one shot, you get “tumble” bonus points and a power-up you can catch before it hits the water. Examples of power-ups include a wild card shot (joker) which will fill any spot, an extra life, combo (clears all the same objects on the screen) and wings that let you fly up right to the spot you’ve been shooting at and insert the correct object. In other cases, you can get an angel who flies by the wayside and helps you fill slots if you need it.

Every few levels, players will face a bonus round, whereby extra points are awarded for filling up all the silhouettes with an object – but you only have one shot to do it, so you need to aim at the highest one.

In total, Venice Deluxe offers four game modes (personally, I like the main “Journey” one the best), spread out over more than 70 unique building shapes and dozens of trick shot designs.

OK, perhaps I’m spoiled after playing outrageously addictive PopCap games, such as Bookworm Adventures, Peggle and Chuzzle, but I feel like Venice Deluxe didn’t suck me in as much. Naturally, casual game reviews are subjective, it’s one person’s opinion, but I’ve played my fair share of casual games to know when something grabs you by the lapels and won’t let go (who says lapels these days, anyway?). I think this game could’ve been more challenging, too, as it wasn’t until building number 22 or 23 that I missed my first falling object, and I also successfully completed every bonus stage.

One other issue, and I only noticed it twice, were some technical programs. In one instance, my key got stuck flying left and right through a chute, but instead of self-destructing, which is what happens if it doesn’t fall to the ground after a few seconds, it kept bouncing back and forth until I moved up the building to the next part. Problem is, when this happened the key just appeared in the water without it even falling (and I lost a life).

But overall, Venice Deluxe is a very good game that will likely appeal to both arcade gamers and puzzle fans alike. Just don’t expect it to be the next Big Thing.