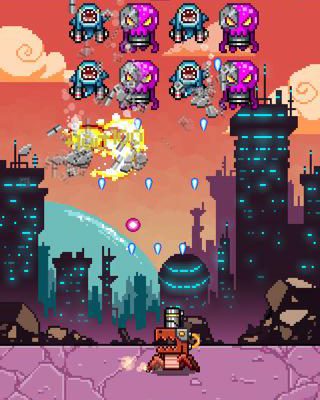 In Velocispider you control the title character, who’s a half-velociraptor half-spider…. um, thing…. that has a cannon mounted on it’s back. You’ll shoot mechanical whales and flying octopodes as they try to swoop down and steal your eggs. If any of that makes sense to you, you’ll probably want to see a doctor. There’s a good chance you’re having some sort of fever dream.

If I were looking to make a comparison, I’d say Velocispider is part Space Invaders, part Galaga, a little pinch of Missile Command, with some enemies that looked like they stepped out of something like Sonic the Hedgehog or something. It’s a weird hodge podge of retro action goodness that all seems to just fit together perfectly. It’s a testament to the style of the game that so many weird different elements work better as a whole than the sum of their parts.

It all plays out the same way. You’ll attempt to stop enemies from flying in and stealing the three eggs along the bottom of the screen. You’ll autofire and move left and right killing enemies and avoiding bullets and bombs. If you like, you can tap and hold on the screen to store up a power shot to take out lots of lined up enemies. Occasionally you’ll get some power ups that gives you a rapid shot or spread shot, but it all stays pretty basic. It’s simple, compelling and super fun.

But in my opinion, what really propelled the game into the fun zone is the look of the game. The graphics are retro-inspired, but way higher quality than what we really had from the old days. There’s a level of detail in all the elements on screen that seem almost impossible with its reliance on bit type graphics. In addition, the music is heavy chiptune stuff that just seals the deal.

The game is broken up over 20 different waves of enemy attacks that unlock as you reach them. This lets you start at the last wave you reached, and is a huge help as you try and work your way through the game. But just like the old school arcade games it uses as inspiration, this is really a high score game. Game Center leaderboard support means going up against friends and other players not in how far you make it, but how high a score you can rack up. 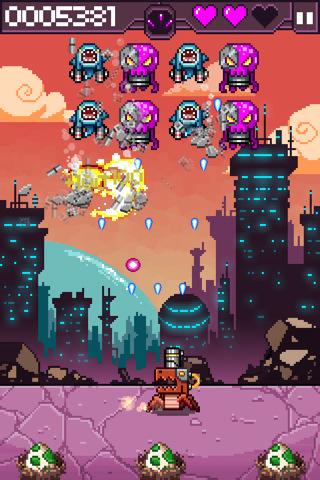 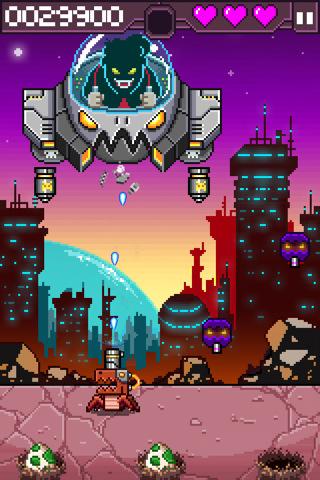 Controlling the game is done through simple tilt mechanics. The further you tilt the faster you move, so you can get a pretty precise level of control here. It’s not perfect, and got me into trouble once or twice. I wouldn’t say it detracts from the overall appeal of the game not having some sort of alternate control scheme, but it’d be nice to see in a future update just to offer some choice.

I’m always leery of the “retro” games that seem to be flooding the market these days. As someone that grew up with these types of games when they were new, these nouveau retro games mostly ring false to me, and seem to simply rely on blocky graphics as being enough to qualify something as retro, with no emphasis on the gameplay. Velocispider, on the other hand, plays like the older titles. It’s something that really gives you that feeling of a game that’s been 30 years in the making.