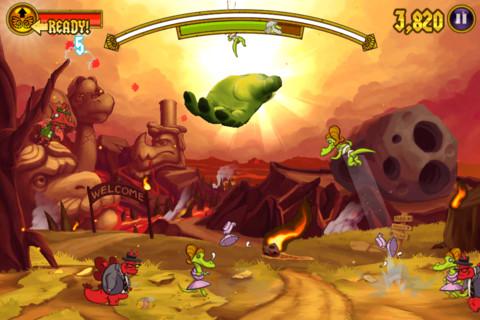 Velocirapture may not deserve Heaven, but it’s still miles above The Other Place.

Long, long ago, before humanity invented atrocities like nuclear warfare and mullets, dinosaurs ruled the Earth. And it was good—for a time. Adult Swim’s Velocirapture for iOS chronicles the forgotten moment in time when Dinosaur God got tired of babysitting his children, so he smote them with a rain of fire. But Dinosaur God was not merciless, no: he carried the faithful to salvation. What, you don’t remember? You were there. You helped him do it.

Rescuing dinosaurs from the Cretaceous Rapture involves “flicking” them into Dino God’s floating hand at the top of the screen. If you’re successful, the raptured dinosaurs arc gracefully into the air (sans clothes) and into the palm of their loving creator. A successful save results in a score multiplier and some additional “Glory.” Praise be!

Ah, but the battle for the mortal soul is not easily won. Velocirapture doesn’t just require you to save the wholesome green dinosaurs; you must also smite the evil red dinosaurs that do whatever they can to keep their green brethren from being saved. Red dinosaurs can scare away the greens, convert them to the dark side, carry them away as they soar through the air to glory, or simply kill them. “Smiting” a red involves drawing a line from Dino God’s hand to the offender. You can chain together God’s wrath for an awesome combo score.

Be careful, though. If you smite green dinosaurs by accident, or if you let them die, or if a red dinosaur somehow ends up in God’s palm, you will lose Glory. If you lose all your Glory, the game is over. Apparently, even the faithful green dinosaurs don’t enjoy being roughed up by their God, and they’re not even buying that crummy excuse about their suffering all being part of some “Great Plan.” 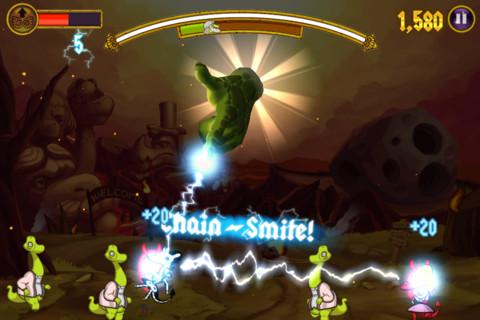 Velocirapture is devilishly simple to play, and its sense of humor is as sharp as a Deinonychus’ foremost talon. As you progress through the game’s story mode, you even gain the ability to collect the evil souls of red dinosaurs and use them to power mass smiting plagues, including a force that flings all the reds into a lake of fire.

Velocirapture is, however, a pretty repetitive game, and you get tired of flinging and smiting before very long. Don’t be surprised if you return, though. Velocirapture isn’t a very diverse distraction, but it still works well for bite-sized play sessions.