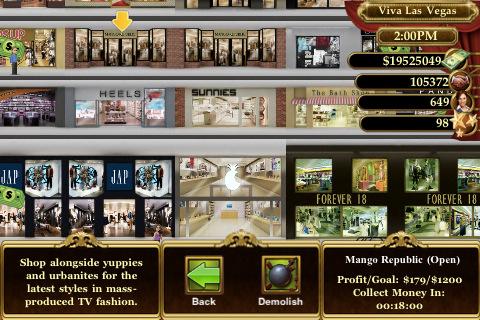 VegasTowers is deep, but held back by some frustrating issues

Hotel management games haven’t quite caught on in the same way that other business sims have. Games like Hotel City and Tap Pet Hotel showed some potential, but ultimately were too shallow to be fully engaging. VegasTowers attempts to remedy this by offering up a huge wealth of options that makes this a much more complex game than its predecessors. But while the added depth is welcome, there are a number of other issues that keep this from being the first great hotel game.

What happens in Vegas stays in Vegas, and your goal in VegasTowers is to keep people staying there and spending money. Your not just creating a hotel, though that’s a big part of it, your also creating a massive shrine to consumerism: packed to the gills with shops, restaurants, and other places for patrons to blow their gambling winnings.

You start with just two floors and as you add new rooms, which can range from luxury suites to coffee shops, you’ll earn more money to then add additional floors and build more money-making rooms. One of the highlights of VegasTowers is the sheer number of options you have for rooms to build, and it only increases as you gain experience levels. Most of them behave in one of two ways: for hotel rooms you’ll need to regularly clean them to ensure new visitors and for businesses you’ll need to collect periodic cash payouts. It’s a common system that makes the game good for short play sessions.

You’ll also have to worry about how you place your rooms, as each one creates a certain amount of noise. Hotel patrons, naturally, don’t want a lot of noise next to their rooms so keeping the areas around the rooms quiet adds an extra layer of depth to the experience. And you’ll also have to deal with other frequent hazards like the all-too-common fire.

There’s a goal system to push you along, though you can ignore it if you like. But completing goals is an easy way to move up the ranks. In fact, it might be a little too easy. We found that almost every time we completed a quest we gained a new level. After just a few days of this we were already past the level 30 mark, something that usually takes weeks in other games. It makes it much less satisfying when you seemingly gain a new level every 10 minutes.

There are also issues with the game’s interface. This particularly comes into play when building and placing rooms. Since you can’t zoom in or out or move the camera around while in build mode, you need to have the camera in the exact right spot in order to place whatever you’re building. If you don’t, you’ll need to exit out, move the camera around, and then head back in hoping it’s placed properly. Since building rooms is one of the most common activities in the game, it doesn’t take long before this gets very annoying, especially with the larger rooms. 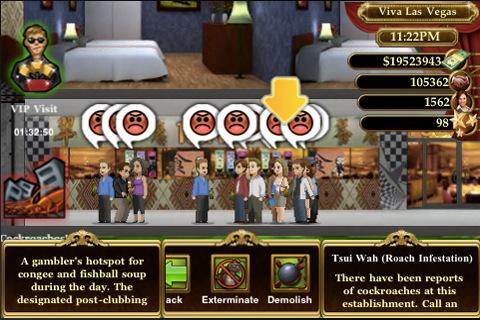 You’ll also run into times where the user interface gets in the way of placing a room, and hotel patrons will often obstruct your ability to tap on a room to clean it or collect cash.

And then there’s the issue of licenses. These seemingly helpful items will allow you to unlock additional abilities or items once you buy the appropriate license. Problem is, you don’t know which one is the right license until you buy it. There’s no details about what each license does. You simply have to guess based on the name.

These issues are relatively small on their own, but when you put them all together they mar what is an otherwise satisfying game. Though the gaudy Vegas theme may not be for everyone, the core gameplay can be incredibly addictive, and you can eventually build up an impressively huge and complex tower. You’ll just need to look past some of the design and interface issues on your way to the top.