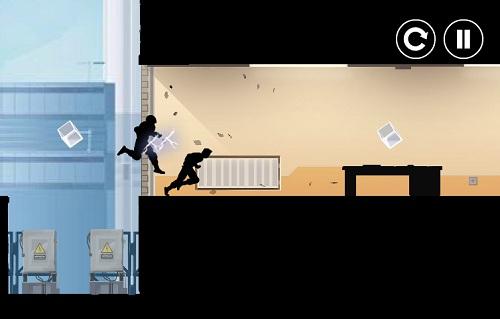 You’re on an endless run from The Man…because video games.

Vector’s developer Nekki relishes sticking to the shadows, but for them, that’s a good thing. It worked for their first major project on Facebook–last year’s wonderful Shadow Fight–and it works for Vector. Their latest title takes their signatures silhouetted art style and places it in a game that–at heart–ends up feeling like a competent 2D version of console cult-hit Mirror’s Edge. Intrigued? You should be.

Much like with Mirror’s Edge, all you need to know is that this is the future, and you’re on the run from nameless authorities. Happily, you’re also the world’s greatest parkour artist, and so you slide under water towers and leap over alleys, always only a few frantic steps ahead of the “Man” who seeks to end your freedom via deadly taser. In practicality, this boils down to a fast-paced zip through levels in one of a handful of zones, including “downtown,” “construction site,” and “technology park.”

It’s fun stuff, and much more challenging than your run-of-the mill Facebook fare. Just one or two levels after booting up Vector for the first time, you’ll likely find yourself missing powerups and jumping queues, mistiming long leaps, and (unless you’re far better at this than I am) getting zapped by our friendly neighborhood taser-wielding thug. It’s a credit to Nekki that these failures never feel like they spring from the design; instead, it’s a learning experience based heavily on memory and quick reflexes. Rather than dissuading further playthroughs, failure adds substantially to Vector‘s addictiveness, particularly when you have enough friends to compete against on the local leaderboards. This is one Facebook game for which it proves enticing to send out invites.

Mechanically, the gameplay is simplicity itself, requiring little more than your keyboard’s directional keypads and (later) three buttons for the deployment of power-ups; these you can buy with in-game currency, or with real cash through a surprisingly agreeable payment model. Refreshingly, it feels like Nekki is willing to give a lot to those who would shell out with their hard earned real-life dollars. Vector also keeps the action moving on its own: not only does  the guard never let up on his chase, but your character’s automated movement keeps the action rushing ever forward. By borrowing queues from the endless runner, the game makes what little agency you have feel more varied, more exciting. 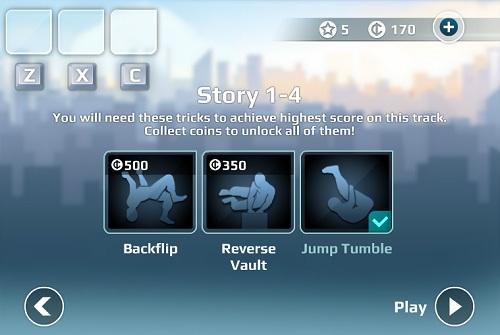 That’s an especially good thing, because there’s a faint whiff of a grind about the whole experience. You’ll need to redo early levels several times to unlock enough coins to buy “tricks” like special somersaults; all of which are needed to get the highest score for a level. Perfectionists may find themselves subsequently tempted to shell out for Facebook credits. Even so, it’s hard to blame Vector  for attempting to monetize; after all, it provides hours of fun whether or not you don’t spend a dime. It subscribes to a payment model that’s centered on clever power-ups rather than the reviled energy bar, and the pricing model ensures that a mere dollar’s worth of Facebook credits can go a long way. With Vector, Nekki once again proves that they’re a Facebook developer worth watching. We can’t wait to see what they pull from the shadows next.