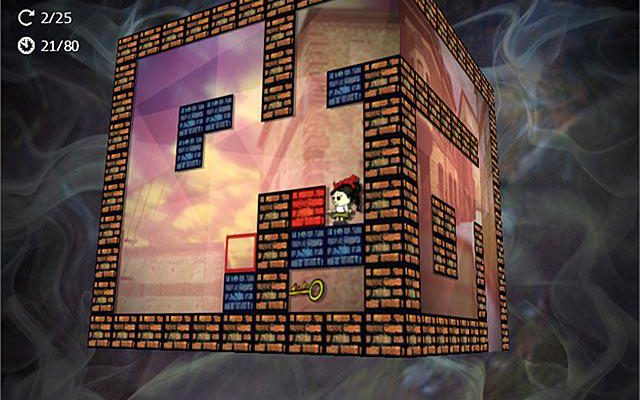 Vanessa Saint-Pierre Delacroix and her Nightmare. It’s a heckuva mouthful for a name of a game to be sure. But it also carries a wacky kind of erudite nature to it, like The Misadventures of P.B. Winterbottom or A Serious of Unfortunate Events. Reading the name should put you in a curious and weird frame of mind, which will be perfect for wrapping your head around and enjoying this strange little puzzle game.

The storyline for Vanessa Saint-Pierre Delacroix and her Nightmare is a sort of Pandora’s box parallel, it would seem, though it’s really not important. Some weird puzzle cube thing she had fell and broke and pulled Vanessa’s entire city inside it, and now she needs to solve the puzzles or lose everyone she loves. Or something. Like I said, not important. The storyline really only serves one purpose: to set up the interesting way you solve puzzles. 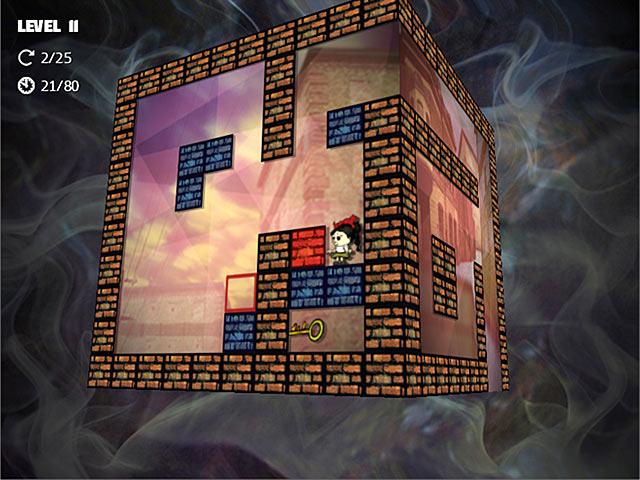 The entire game takes place on the outer panes of a 3D cube that rotates on screen as you move around. But you’re not exactly “inside” the cube moving around — you’re really playing a 2D games that’s being projected onto the surface of the cube. You’ll move around, jump over obstacles, exit through the doors and if the edges of you plane are open you can walk to the edge and move to the next plane on the cube, always looking for the door out to complete the level.

In an interesting twist (future pun) to this already weird little puzzle game is that you can rotate (get it?) the plane your on 90 degrees either way to reorient the layout to help you get through. Now this doesn’t mean you rotate the cube, no. You just rotate the plane that you’re on, independent of the cube layout as a whole. What makes this interesting is how you can move yourself around once you get this going. 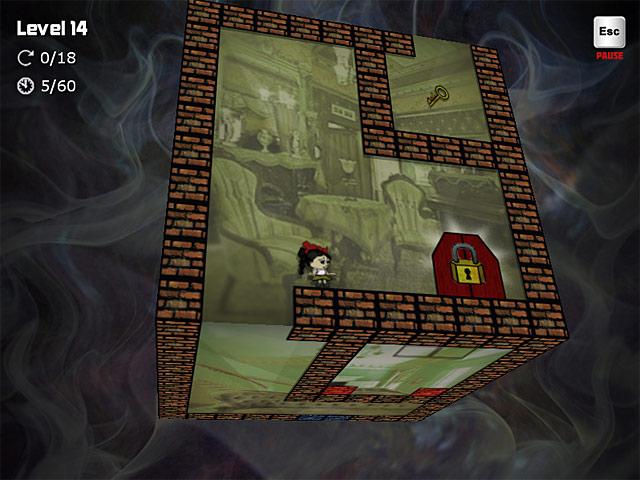 Say, for example, that the door out of the level is on the plane under you, and you can’t get to it because there’s a floor running the entire length of the plane you’re on. Well, there’s a path to the right heading to the next plane over, so just rotate your plane and bang… the exit that was to the right is now facing down. Fall down (since gravity shifted) and you hit the bottom plane. That’s an easy example, but it gets much more difficult than that.

I don’t envy puzzle game makers, not in the least. I can’t imagine how hard it is to constantly find new and unique ways of solving different puzzles, then figuring out tons of situations to put you in to use your new mechanic. Vanessa Saint-Pierre Delacroix and her Nightmare not only finds a unique take on solving a puzzle, but executes it well enough that I was entertained the entire game through.