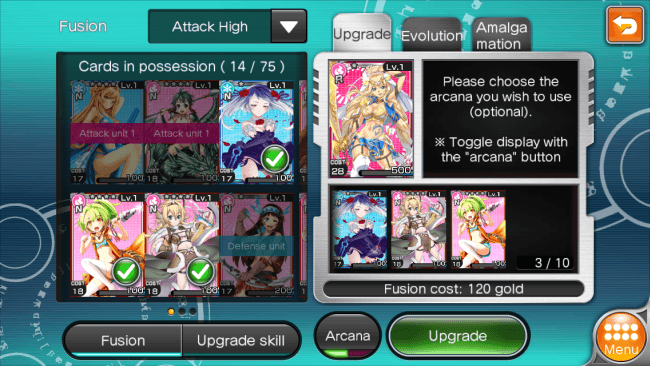 I have to admit; I’m rather shocked and mystified by Valkyrie Crusade. It’s a combination collectible card game and town builder, which in itself is an odd match; but both elements support each other a lot better than I’d have expected. So much so, in fact, that it might just be my current freemium favorite despite all the needless issues.

The sim elements of Valkyrie Crusade are fairly typical: collect three kinds of resources (gold, ether, and iron) and use them to build/upgrade structures that can gather and store more resources, as well as make incremental changes to the core mechanics. The card side of things is also rather familiar, with “friendship points” earned through befriending other players needed to summon (i.e. buy) more cards, card fusions, evolutions, etc.

However, there are a few key differences. Cards used in attack and defensive formations have applicable stats, as expected, but they also have health (represented by “soldiers” for some incredibly odd reason). Different cards have different maximums, and it costs two of all three resources for every one players refill. So when these bizarro health bars get into the thousands, it can be quite expensive to keep everyone topped-off. Totally worth it, though, as the more durable a unit is the longer it should take for them to get knocked out in battle.

The interplay between the sim and card elements in Valkyrie Crusade is impressive. Adventuring with a team of heavy-hitters often yields bonus cards and even extra resources, while the resources earned from managing the kingdom are instrumental in improving one’s forces. There are also a number of special buildings to construct that will have an impact on the card elements by increasing the number of units that can be brought into battle or boosting their overall effectiveness. The best part about this back-and-forth is that it usually gives players a fair bit to do within each session as they bounce between summoning cards, harvesting resources, adventuring, upgrading their structures, visiting allies, participating in special events, and a whole lot more.

Other minor elements are also handled quite well. Cards that can be used to evolve have a handy indicator (represented as a star or line of stars) that shows just how many times they can be combined, which is very useful for determining whether or not to hang on to them or just use them for enhancement. It’s also nice that so many low-level cards only have one evolution combination – which means I can fuse two of the same, get my encyclopedia entry (it’s the completionist in me), and be done with them. Amalgamations are another interesting element that give players the option to fuse two different cards to create a potentially more powerful one. There are even evolution accidents that will occasionally yield totally different (and awesome) results!

And yet, as fantastic as I’ve found so much of Valkyrie Crusade to be, I can’t help but be disappointed by some of its seemingly pointless issues. First and foremost is the installation I had to sit through after starting the game up for the first time. I was anxious to play, but instead had to sit there and wait for almost ten minutes while it downloaded a bunch of updates. Then I had to wait another 5+ minutes while it downloaded HD images for the cards. On top of that, all the new content brought this 39.5 MB download to 218 MB once installed. I mean, what’s up with that? The waiting didn’t end there, either. I made the mistake of selecting the tutorial, and what followed was an excruciatingly slow trudge through a bunch of freemium mechanics I’ve been painfully familiar with for years. With no way to skip it, as far as I could see. 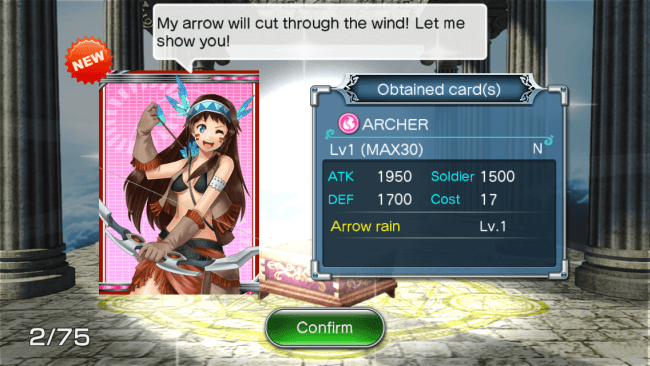 These issues persist once the tutorial is over, too. For whatever reason, players are forced to wait for a second or two upon entering the Build/Shop screen, leveling-up, and starting new (or repeating) adventures as characters elaborate on the situation at hand. What this means is that instead of simply jumping into the shop to build another farm or revisiting an old quest for extra rewards, I have to wait for the unskippable text to go away. At first it’s only slightly annoying, but after playing for hours on end it starts to grate on the nerves. A lot.

In the end, though, I can honestly say I’ve had a lot of fun with Valkyrie Crusade. The card mechanics are both comfortingly familiar and different enough to keep my interest. The town building is fairly simple, but it’s not the main focus and it compliments the card end of things quite well. I could certainly do without the ridiculous downloads and irritating “This is the shop!” text that feels completely useless, but none of that is bad enough to ruin my good time.