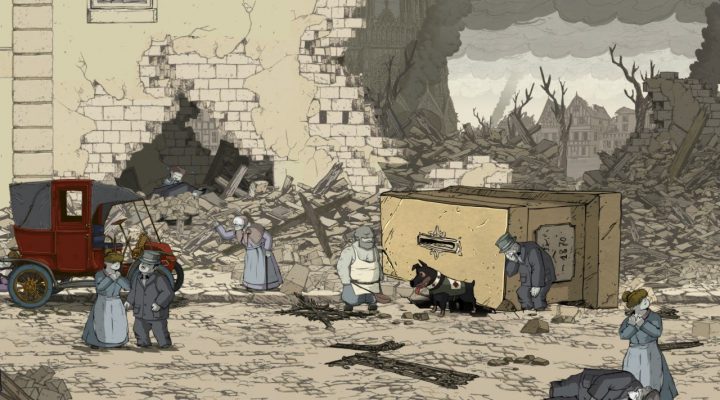 Perhaps the most unblinking look at war I've ever seen in a videogame, backed by brilliant art, audio and historical information.

Mediocre gameplay and story elements that feel out of place in what is essentially a videogame summation of the brutality of war.

Valiant Hearts: The Great War is all over the place. There are moments of madcap adventure and stark brutality; simple, eye-glazing gameplay and a story that’s absolutely riveting; an anthropomorphic dog who wouldn’t be out of place in a Disney animated film, and an in-game encyclopedia filled with colorized photos and a litany of wartime horrors. It is silly and powerful and funny and devastating, and for all it gets wrong, it’s one of the most moving and memorable games I’ve played in a long time.

It can’t be easy incorporating conventional videogame play into the relentless carnage and sputtering misery of the First World War. That’s the primary challenge facing Valiant Hearts, and the truth is that it doesn’t do spectacularly well with it. It’s a simple adventure-puzzle game, with compact levels and solutions to most problems that are immediately evident. There’s little interaction with the environment beyond pulling chains, switching levers and throwing things, and it often feels out of place, such as when you must save people from a chlorine gas attack by way of a minigame reminiscent of the old Lucasarts classic Pipe Dream – not improper, just inappropriate. 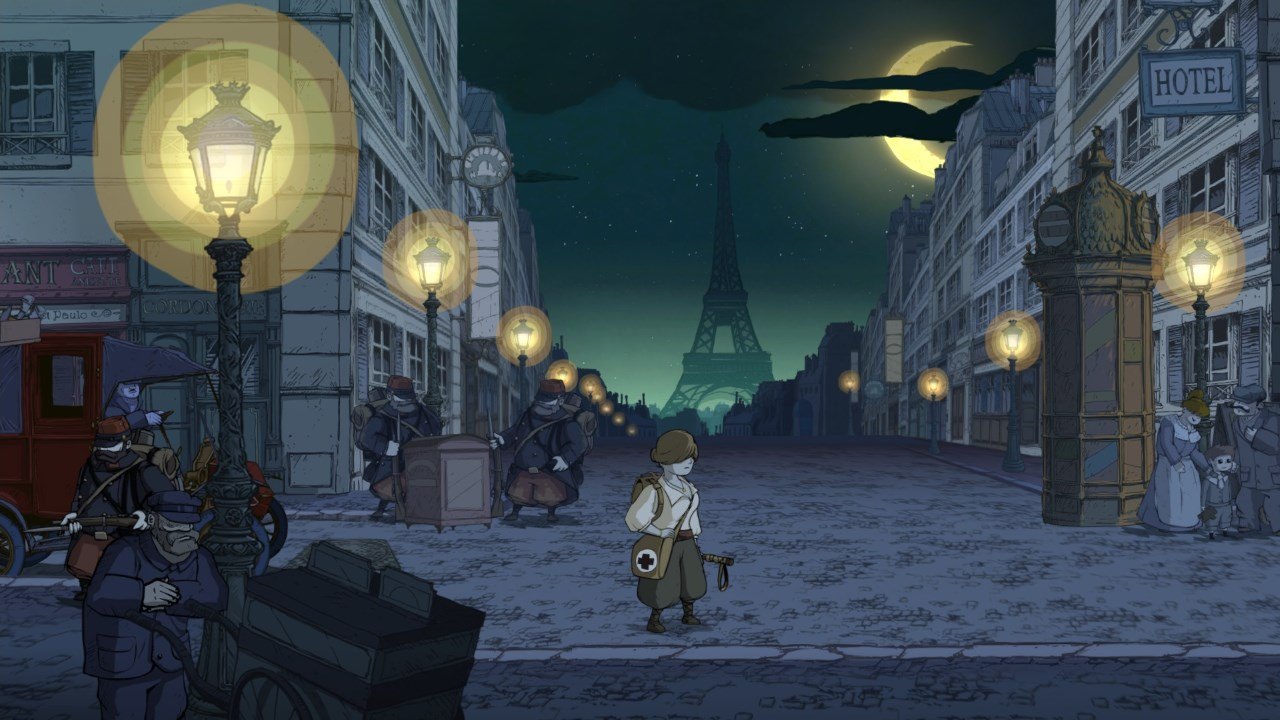 The narrative, particularly through the first half of the game, is equal parts “war is hell” and “war is fun,” typified by the freewheeling adventures of Emile and Freddie, two of the four playable characters, who leave their French army unit and spend months roaming up and down the countryside in pursuit of Baron Von Dorf, a cartoonishly villainous German aristocrat. Meanwhile, Karl, Emile’s German son-in-law, is given relatively short shrift despite being at the center of Valiant Hearts’ most compelling story: With war on the horizon, he’s deported from France, forced to leave his young wife and infant son behind, and is then drafted into the German army.

Some of the story elements, like the thoroughly throw-away plot twist that justifies the inclusion of an American in the cast, are more of a distraction than a contribution, but when it works – and more often than not, it does – it works well. Anna, a Belgian student and the fourth playable character, is introduced just as the French army is mobilizing. She commandeers a disabled taxi and uses it to help drive troops to the front in a wild, careening action sequence packed with the promise of glory and musically-charged “Vive la France!” excitement, but runs headlong into unimaginable carnage when she arrives in the form of broken, bloody bodies as far as the eye can see. The sudden, sharp change of direction is tremendously impactful, and I wondered if civilians and soldiers in France felt the same way at the war’s outset, as the promise of adventure and a quick victory gave way to stark horror.

And that’s where Valiant Hearts scores: It doesn’t flinch from the reality of war. Soldiers are gunned down in pointless, suicidal attacks, bodies pile up, the wounded and maimed sit and lie in squalid filth and the narrator cites casualty figures that are literally impossible to comprehend. The effect is diminished somewhat by the pursuit of Baron Von Dorf, the aforementioned villain who possesses first a monstrous super-zeppelin and later a massive tank, but the game becomes much more focused and effective once he’s out of the way.

Despite the grim subject matter, Valiant Hearts is an absolutely beautiful game. Everything is hand-drawn and highly stylized, and there are several instances where the perspective pulls back to reveal breathtaking views of shattered cities or night skies. There are some subtle touches as well, such as the climax of the Vimy Ridge sequence, which ends with two pillars of white smoke reaching into the sky, an unmistakable reference (if you’re familiar with it) to the Canadian National Vimy Memorial in France. And although it’s not visually graphic, the audio often is; the screams and cries of dying men and women is downright disturbing in some places. 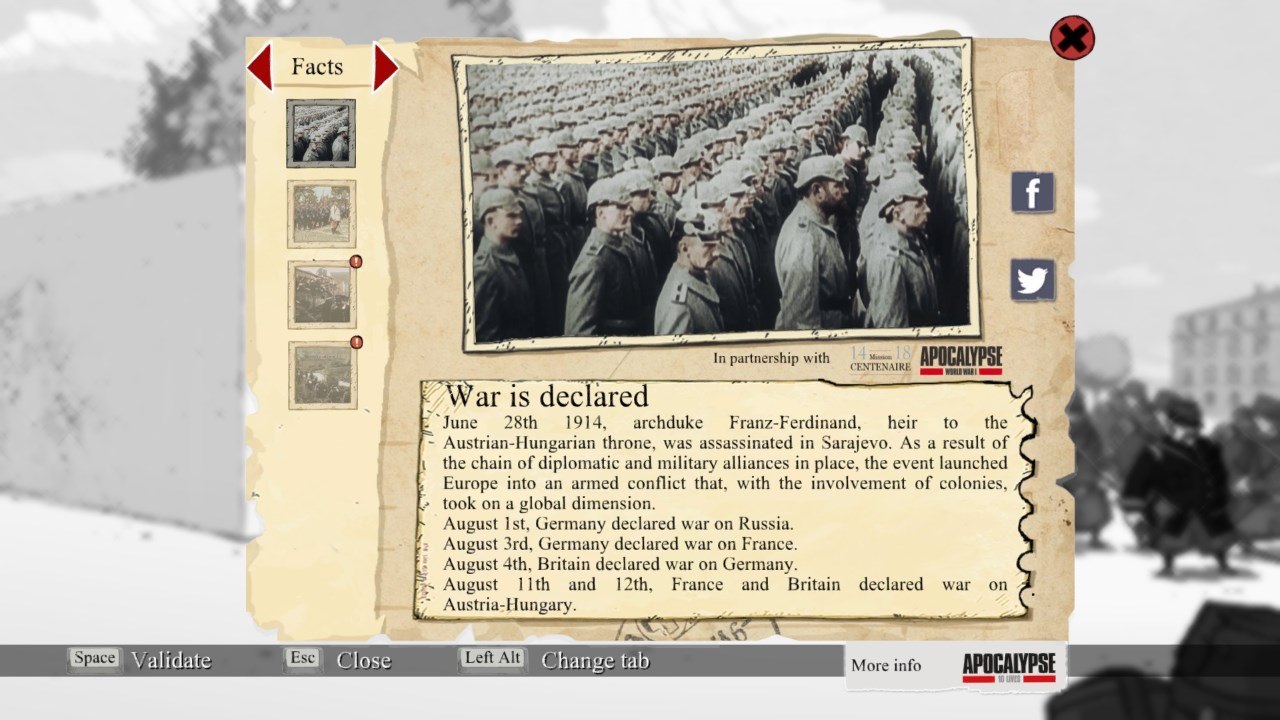 I did feel a very minor annoyance that the rough-and-tumble Freddie is an American – a volunteer in the French army – but this is most definitely not an “America saves the world” videogame. Valiant Hearts makes a real effort to highlight the contributions of lesser-known players in the war, like colonial troops, and while the Germans are clearly the “bad guys” and thus more faceless than the Allies – the game makes no distinction between the nationalities of the Central Powers – they’re nonetheless humanized as sympathetic individuals who, like everyone else, just want to survive and go home.

Valiant Hearts: The Great War doesn’t know what it wants to be. It’s a game that features carrier pigeons wearing French army helmets that also explains, in just enough detail to be unpleasant, how chlorine gas works. Yet it’s still a more memorable game about war than just about any big-budget blockbuster in recent memory, a testament to the quality of its presentation and the effectiveness of its honest, unblinking look at the most horrific war of the modern era. It amazes me that it came from Ubisoft, a major multinational publisher known for generic action franchises like Assassin’s Creed and the Tom Clancy games, because it’s such a daring, adventuresome effort that looks far more like something you’d expect from a well-funded indie studio. And if I can’t say it did much for me as a conventional adventure game, as an example of the power of storytelling in videogames, I really can’t say enough.