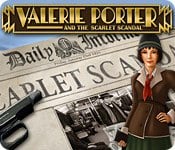 Corruption. Lies. Sex. Betrayal. Murder. There’s a big story waiting to be told in hidden object game Valerie Porter and the Scarlet Scandal, and you’re just the plucky reporter to do it! This is your big chance to make your name as a journalist, so search for clues and follow your hunches but be careful who you trust – not everyone is what they seem.

You take a job at the local newspaper hoping to be a journalist, but your boss seems to think women are better suited to getting coffee than writing headlines – this may be the 1920s, but he’s not quite ready to think "modern" just yet. Fortunately, an established female reporter decides to give you a shot, and it’s not long before you’ve unwittingly uncovered a huge scandal involving the mayor, a prizefighter, a director and a famous actress.

The pursuit of your journalistic career will take you to numerous locations around the city, where you’ll usually first have to search the area for clues and helpful items. You’re provided with a list, but sometimes the descriptions of the objects you seek are deliberately vague, such as "foot warmer" for a sock or "enemy of wrinkles" for an iron. You’ll need some of the items, such as keys or letter scraps, to help you progress in the game or advance the story.

But you won’t just be scouring the scene for clues – you’ll also want to keep an eye out for batteries and bells. Each location has two batteries that will help your hint meter recharge faster, and five bells. There are one hundred total bells hidden throughout the game, and they can be devilishly tricky to find. The hand-drawn artwork of Valerie Porter is beautiful, era-appropriate, and nicely detailed – but its realism can make some of the objects difficult to find. A pen just plain isn’t that big when you’re looking at an entire room, after all.

Valerie Porter mixes up the hidden object searches with a variety of games and puzzles that are refreshingly offbeat. After searching the Mayor’s office for sports equipment, you’ll have to do a word search for the particular sports they represent; to persuade someone to open up to you, you have to quite literally navigate a tangle of conversation to choose the correct response.

You’ll also have to develop your own photographs, reassemble a camera by following a schematic, reconstruct a few torn notes here and there. Though the minigames repeat, they’re spaced out enough to keep them from ever feeling repetitious, and their increasing difficulty as the game goes on keeps you on your toes.

You can’t neglect Valerie’s job at the paper, though. At the end of each chapter, you’ll help her compose her article by choosing key words from a list as the she taps sentences out on her typewriter. This shouldn’t be a problem so long as you were paying attention to the plot, but you can reset it if you make a mistake. Once the story is done, you’ll have to complete the headline by filling in the blanks with leftover typesetting  blocks – kind of like Hangman. You’re given a few letters to start, but completing the longer headlines takes some flexible thinking.

Hidden object fans who want an extra bit of challenge will enjoy Valerie Porter’s unusual combo system, which rewards you for finding several of the same kind of item in one fell swoop. Holding down the mouse button, then moving your cursor from, say, bottle to bottle to bottle, creates a chain combo that fills up your hint meter even more.

This technique also comes in handy during the special "transit" sequences, which task you with finding several instances of a specific item – newspapers, scarves, glasses – during Valerie’s trip on the subway. It’s a fun spin on the object-finding mechanic that’s completely optional, but very satisfying.

Though every aspect of Valerie Porter‘s gameplay is incredibly well-executed, it’s the story that will keep you playing. The writing and acting are both top notch, spinning out an intriguing mystery with twists and turns aplenty. You’ll keep clicking through level after level, just to find out what happens next. Hopefully we’ll see more from Valerie in the future.