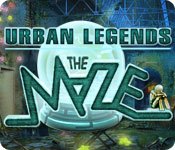 A popular reality show gets interrupted mid-broadcast and its contestants mysteriously disappear.

These days reality shows pervade our lives so perhaps it was inevitable a video game would be made about them. Elephant Games’ new hidden object adventure Urban Legends: The Maze takes us behind the scenes of a hit reality show after it’s abruptly cut off and its contestants inexplicably vanish. It’s a unique concept for an H.O.G. that fortunately for us, is far more entertaining than most reality shows ever are.

As mentioned, the game starts when broadcast of the popular game show, “The Maze” is cut off during its final round and all of the finalists go missing. Though publicly, studio officials claim “technical difficulties”, they quietly hire a detective (you) to look into the disappearances and you start by investigating the set. Minutes after your arrival, you’re accosted by a man in a grotesque mask who reappears throughout the game to taunt you and set deadly traps. Obviously, he’s the sinister figure behind the show’s disturbing events and it’s up to you not only to stop him, but to unmask him.

From the outset, Elephant Games earns itself a gold star for originality, at least as far as the game’s intro and concept go. No haunted houses, historical villages or creepy asylums here—nothing’s more unsupernatural or contemporary than a modern day television studio. The setting provides a range of opportunities for unusual and oftentimes, surreal hidden object scenes and situational puzzles (how often do you run across an angry cheetah hanging out in the ladies’ room?). The game’s flow is good too, alternating expertly among investigation, item-hunting and puzzle-solving. There are many different locations to explore and Urban Legends: The Maze eliminates the potential frustration of revisiting them in two smart ways: by removing an area’s interactivity once you’re done with it and by allowing you to teleport among locations.

The latter is done via the journal map which further assists you not only by letting you know exactly where you are, but by coloring areas green wherein you can actively do something. Even better, you can jump among locations by clicking on corresponding areas of the map, thus saving yourself a lot of clicking (and a lot of confusion if your sense of direction isn’t the best). Although the game’s core concept and gameplay construction are strong, there are some areas of it that could use some improvement. In general, the graphics are well done, although the frequent fully-animated cutscenes are fairly grainy and expose some awkwardness in the character animation. The sound unfortunately, is even less agreeable. There’s no voice acting in the game, which for my money is always a negative, and the music is forgettable.

The game’s worst pitfall however, is its dependence on overly familiar puzzles. 80% of most hidden object games’ puzzles ask you to open doors or unlock boxes but the best of them find interesting and creative ways to do it. Too often, Urban Legends: The Maze asks you to revisit the same kinds of puzzles you’ve solved tens (for some of us, hundreds) of times before. Move tiles around to reassemble an image? Yup. Line gears up so all of them turn? Check. Rotate pipes/wires so power/liquid can move from point A to point B? Yessiree. We’ve seen them all before and The Maze not only repeats things seen umpteen times in other hidden object games—it even repeats the same puzzle types within itself. In addition to presenting too much puzzle-sameness, it also presents us with puzzle difficulties that swing wildly from the too easy, “three clicks and you’re done” type to the “what in tarnation am I supposed to do here?” variety. Most annoyingly, the latter kind often come with directions so convoluted, they confuse the issue rather than clarifying it.

Despite this inconsistency and puzzle creativity deficit, Urban Legend: The Maze is still a highly entertaining game. Its fresh concept provides hidden object fans with a much-needed change of setting and pace and its thoughtful overall design was made with players’ needs firmly in mind. With strong story-telling and intricate construction, not to mention a 4-5 hour play time, it’s an interactive reality show that’s well worth tuning into.