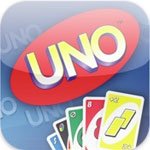 UNO has started to sprout up on every gaming platform you can imagine. From Xbox Live to Facebook and everywhere in between, the people behind the classic card game have been more than happy to let us dabble in a little old school nostalgia. It was only a matter of time until UNO made its way to the iPhone.
For those new to the classic card game, UNO is a lot like Crazy Eights. Each player is dealt a specific number of cards and take turns discarding them based on color and number. Other special cards are thrown into the mix that will force your opponents to skip their turns or pick up more cards. The first player to discard all of their cards (and who remembers to yell UNO!) wins. There are a few more twists and turns to the formula, but for the newly initiated this should be more than enough to welcome you in to the wonderful world that is UNO.
Seasoned veterans of the game will be delighted to know that UNO for the iPhone offers up a fairly deep amount of rules customization that will allow you to both tweak basic rules (scoring goals, cumulative penalties) and introduce advanced options like Jump-in gameplay and UNO 7-0. While these modes may sound strange and new, like all things UNO they’re easy enough to grasp once a game is under way.
The controls are simple but can be a little frustrating for those of us with bigger fingers. The cards, even when zoomed, are stacked pretty closely together if you have enough of them. You can either push a card towards the discard pile or double tap to send it there on its own, but unless you’re super-delicate with your selection there’s a good possibility you may end up sliding the wrong card to the dumpster.
The game knows its own rules though, so if you try to do this with a card that doesn’t belong in the pile it’s not going to let you and you’ll be right back to where you started; no harm, no foul. And really, putting that yellow 2 instead of that yellow 5 into the pile isn’t that big of a deal. Regardless, you’d like to know that a game is going to do what you’d expect it to. Due to the closeness of the cards and the thickness of some fingers, that’s not always going to happen here.
Another problem: when zoomed in on your hand, the draw pile is much to close to cards. Few things could be as heart-breaking in UNO as finally getting to use that pick-up 4 wild card and accidentally drawing a green 7 instead. It happened to me, and we’d hate to see it happen to you.
While there’s definitely some mild frustration to be found in the card layout, it’s easy enough to get used to. And when you see what UNO on the iPhone has to offer it’ll be hard to get hung up on minor difficulties. In addition to the standard quickplay, you can engage in single player tournaments, local multiplayer, and yes — online multiplayer. It’s a rare thing to see an iPhone game offer up a full online multiplayer, and UNO pulls it off with flying colors.
To play online you’ll need to sign up for a Gameloft Live account. Gameloft Live is just one of a number of social gaming networks vying to cement itself as the de facto online gaming provider for the iPhone. As UNO was developed by Gameloft, it was somewhat inevitable that they would use the service.
Taking the UNO experience online is just as much fun as you’d hoped for. This is one of the few games that proves the iPhone really has the chops to present a quality real-time online multiplayer experience. Unfortunately UNO suffers from the same fate as most online games: shortly after its release the number of available players has really bottomed out. And while it’s not as bad as it could be (there are players online, after all) it’s next to impossible to get a game going with more than 2 players. Still if that’s all you’re looking for, there’s almost always a handful of people online waiting for competition.
UNO is simple, classic fun that anyone can enjoy. Sure there might be some card-selection issues when you have a full hand. And yes, it might be tough to find a table of four players to sit down with online. Despite these little obstacles though, Gameloft has offered up a version of UNO that retains all of the fun and competitive spirit of the original. Whether playing against fictitous opponents in a tournament, a stranger halfway around the world online, or just a friend alone in your kitchen, you’ll never not enjoy yelling out “UNO!”