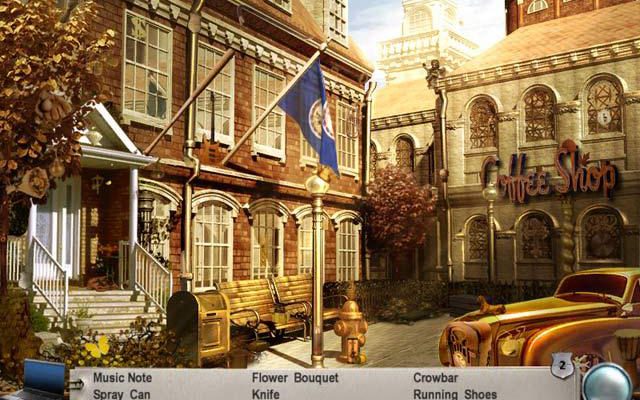 4,000 cases to explore sounds like a lot, but there’s less depth than you think.

Unlikely Suspects promises a lot to the player, with over 4,000 different outcomes to explore. From that figure alone, you’d think the game would pay for itself, but once you figure out where the number 4,000 really comes from, you might find yourself questioning the purchase.

Unlikely Suspects has no story, at least not in the traditional use of the word. You are a detective, and your boss simply tells you that he has a massive backlog of 4,000 cases that he needs your help in solving, and you’re sent on your merry way. 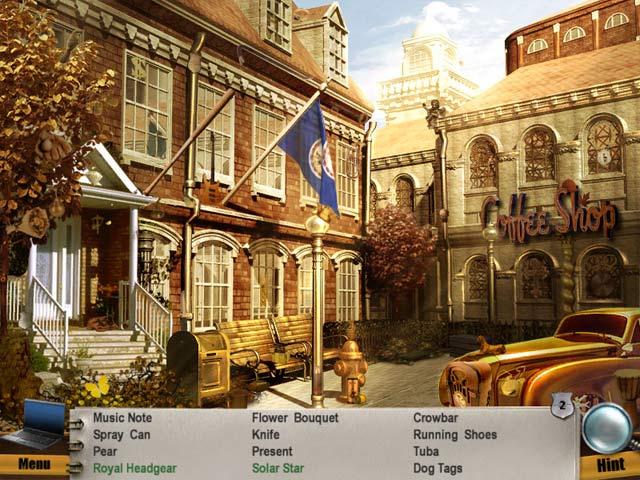 The game takes place on a global scale, with 16 victims and/or suspects in play at any one point in time. The main portions of gameplay are incredibly traditional hidden object scenes (find the items on a list), with more than 30, nicely decorated scenes appearing in the game in all. You’ll find yourself traveling the globe, searching in one of two scenes associated with six major countries / regions, including England, Ireland, Germany and of course, the US (the US is unique in that there are multiple locations to search, including New York City or Las Vegas).

The progression of each case is the same: begin by searching the murder scene for any evidence pertaining to what killed the victim. You’ll search the victim’s home for evidence as to where they last traveled (hence the worldwide search), and in following in their footsteps, you’ll come across the three main clues that lead you to the killer.

Outside of these hidden object scenes, you’ll be able to use deductive reasoning to determine what the murder weapon was, based on clues you’ve been provided by the medical examiner). If the corpse had gunpowder on it, as an example, your victim was killed with a gun, but you won’t be able to determine which gun (there are several) until you are told more by the ME. 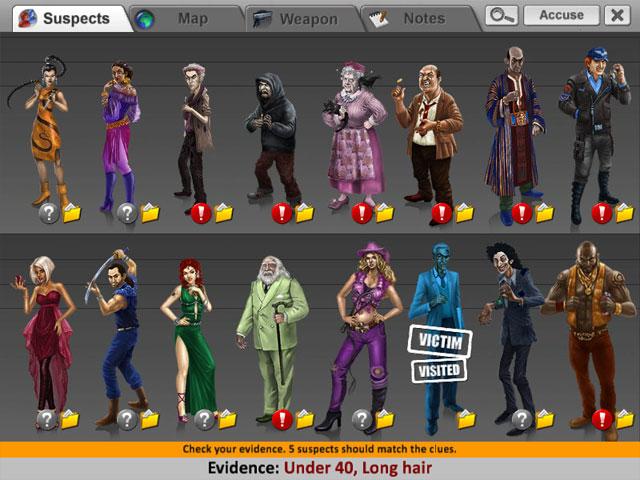 The same sort of gameplay holds true when determining the killer. Based on the clues you find at the scene, you’ll find out whether or not the suspect was wearing a ring, has tattoos, or even what kind of shoes they were wearing, among many other options. However, this isn’t CSI, so don’t expect anything too advanced. The traits of each suspect are listed in a folder, and you simply flag those that match the trait you’ve been given.

All of that being said, once you determine the killer, the case is closed and you move onto the next case. Here’s the kicker – the scenes you search in every case remain the same, so the “4,000 outcomes” number you were given at the beginning all boils down to different randomly assigned combinations of murder weapon, victim, and killer. What seemed like a game with such a grand scale really isn’t, and while this does provide for almost limitless gameplay, once you’ve played even two cases, you’ll find yourself memorizing the locations of objects, and finishing cases within 10-15 minutes, tops.

There is some additional content outside of this “story” mode, though. Once you finish 4 cases, you’ll unlock Quick Play mode, which allows you to find only 4 items in each scene, rather than the full list, speeding up your progress even further. In addition, each scene in each case contains two hidden police badges (the positions of which also do not change). Find 50 of these across all cases, and you’ll unlock three mini-games, accessible from the main menu. 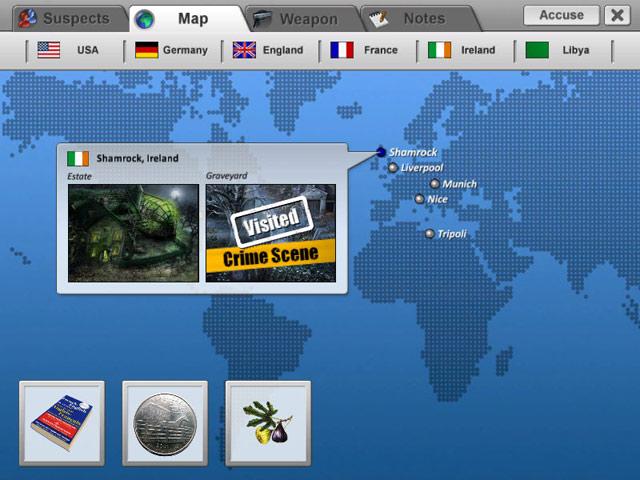 One is an unlimited hidden object experience – pick a scene from those available in the entire game and find all of the items on a list. Another is a memory game, asking you to match the faces of criminals on playing cards. Finally, the third is an action mini-game, that has you practicing your weapons “accuracy” by quickly hovering your mouse over targets to earn points.

Unlikely Suspects‘ approach of using randomly generated cases to bulk up the playtime is a unique approach to hidden object games, but the depth is misleading. Hidden object game fanatics who don’t mind searching over and over again from the same shallow pool of items and scenes will be happy to plow through all 4,000 cases, but people who want a challenge will find nothing to keep them coming back once they’ve begun to memorize the locations of items. If there was any game for which you should download the trial before buying, this would be it.