Under a Spell Review: Abracadablah 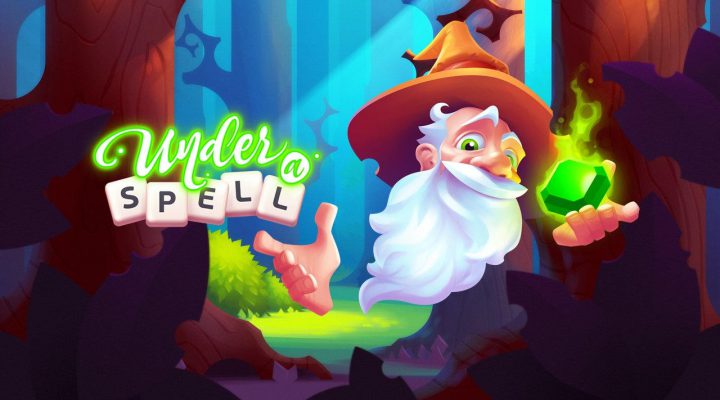 Aesthetically pleasing, tactile puzzles that are satisfying to interact with.

Over 1,800 levels with some randomization, resulting in an endless supply of puzzles.

No timer (except on Daily Puzzles) or punishment for wrong guesses.

Words must be created in order, resulting in a frustrating and tiring process of re-trying words you've already found.

Many puzzles have no indication of what word is expected outside of number of letters, forcing a lot of "wrong" word creation out of valid vocabulary.

The "magic" theme is underused and seems like an afterthought.

Under a Spell is a word-search puzzle game from developer Happymagenta. Despite their prolific catalogue in the mobile space, Happymagenta rarely sticks to one type of game for long, instead trying out different genres and mechanics, resulting in a widely varied list of credits. Their past titles range from the endless PAC-MAN-esque Tomb of the Mask to the beautifully polished tower-stacker Cargo King to the monochromatically retro roguelike Into the Dim. Under a Spell is their first foray into the word game space, and while it doesn’t land as smoothly as some of their other efforts, it contains a few gratifying features that could pique the interest of word puzzle aficionados. 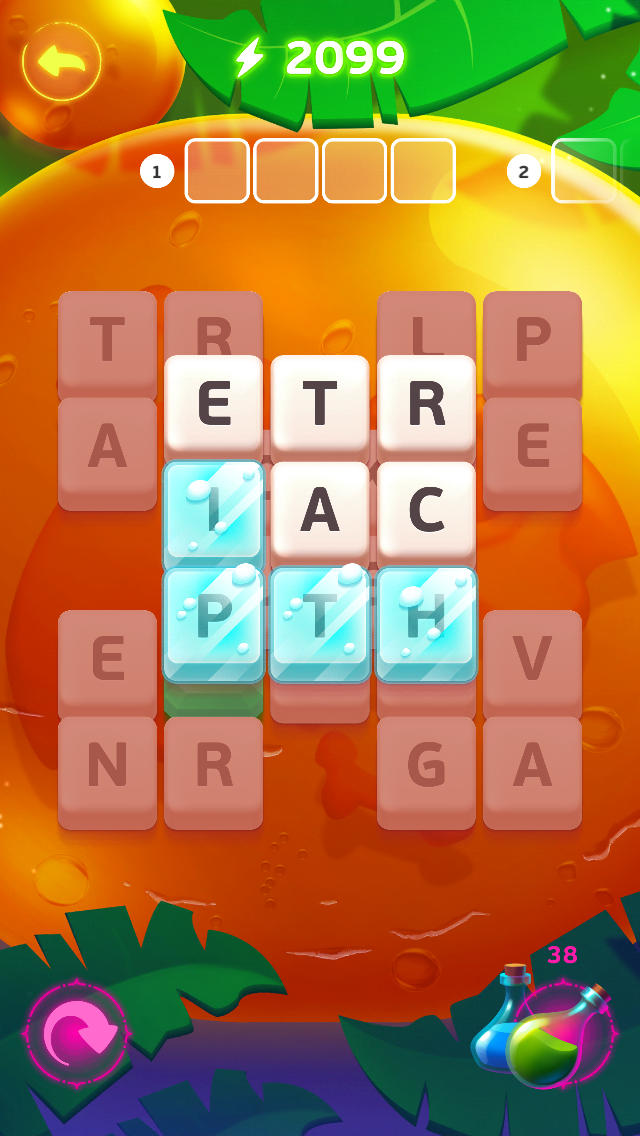 Levels in Under a Spell contain a set of Boggle-like tiles stacked three layers high. The number of tiles and their shape vary, but the bottom layer usually contains more tiles than the other two. In screenshots, this makes the game appear to feature mahjong-like gameplay, but in reality it is nothing like mahjong. You do have to remove the top layer of tiles before reaching the next, but at no point are you accessing the tiles you’ve uncovered for immediate use: instead, these layers merely act as three different stages in a single level, with each layer unlocking after you’ve cleared the one above it.

To clear a layer, you need to spell words by tapping or swiping letters in the correct order. Unlike Boggle, letters must be physically touching to be used together, so you could not select an “M” and an “E” on opposite corners of a 3×3 grid to spell ME. Letters can be selected in any direction—forward, backward, diagonally, etc.—so you can snake around the board in intricate paths or zigzag around a small bunch of letters while creating your words. Once a letter tile is used (except specially-marked letters with multiple uses), it is removed from the board. 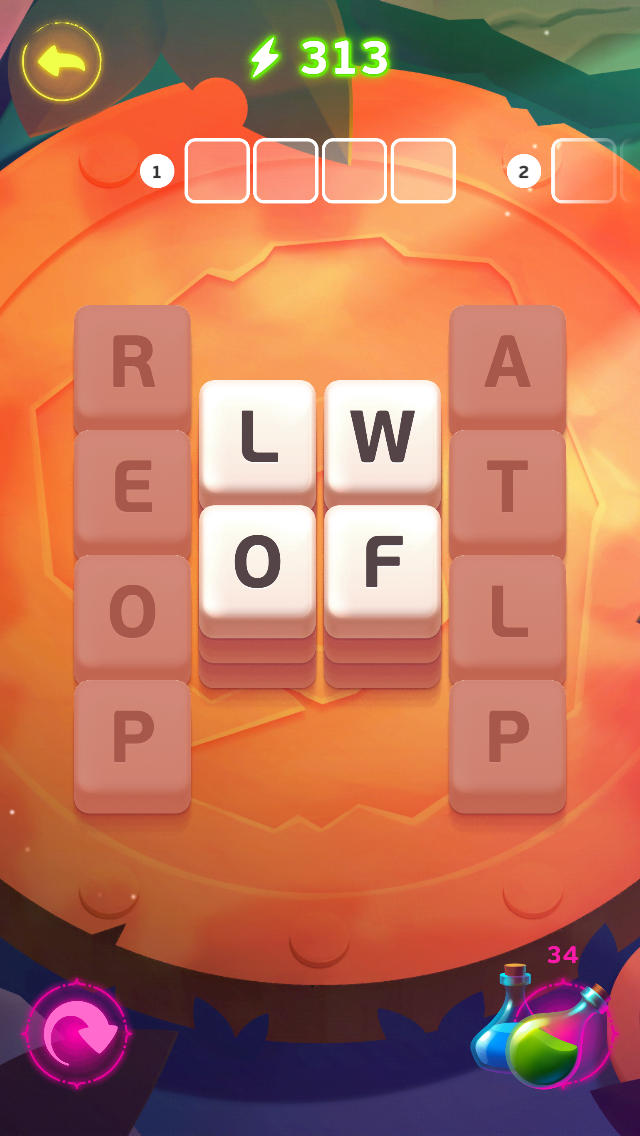 Your goal on each layer and in each level is to create the specific words the game is searching for. You will always know the length of the current word you are being asked to make by the blank tiles above the board, indicating whether it’s a 3-, 4-, 5-, or 6-letter word. There are a couple of other special tiles that narrow down the possibilities: frozen tiles cannot be used until they have thawed out, so if a tile is encased in ice you know it’s not a part of your current word. And colored tiles will be indicated in their associated word’s blanks; for instance, if you see a green letter, one of your required words will have a green blank somewhere, indicating that letter’s position.

Otherwise, however, there are no hints as to what word the game expects at any given time. Words do not appear in themed packs or in relation to one another, and there are no crossword-like clues indicating what you’re searching for. Even if multiple words could be created—say, “flow,” “fowl,” or “wolf”—from your current letters, you have to land on the specific word the game is expecting. This wouldn’t be a huge issue if Under a Spell didn’t insist that you solve puzzles in order, but currently you must find every word in a stage in the order the game lists them. For example, on one puzzle, we had a layer of eight letter tiles visible. The word we needed to find was four letters, and the word after it was four letters. The game wanted “cast” and “coat”—we created “cast” and it was not accepted. We had to create “coat” first and then it would take “cast.”

Situations like this come up very frequently and they’re extremely frustrating. If the game used its frozen or colored tiles more often to indicate what letters it was expecting at a certain time, solutions would not feel like such a guessing game. But many layers contain no special tiles and end up just being random inputs of real words until you land on the right one. The obvious solution would be to let you enter words in any order so that if you do find at least one of the words in the current puzzle, it is counted and its letters removed from the board. This is a common feature in these types of games, and there are plenty of examples of similar word search titles which don’t restrict you so heavily: Words Crush by BitMango, WordBubbles! by Apprope, and Puzzle Cards by Marc Baldwin are just a few that allow you to discover words in any order.

Under a Spell might try to justify this poor choice of order-specific answers through its magic theme—you’re casting a spell, so of course it needs to be done in the correct sequence. But this theme as a whole just feels like a dressing and not an integral part of the game. The level select screen is a lovely magic tome with puzzle packs named after spell ingredients and hints are stored in a magic vial, but otherwise the setting isn’t really utilized. You’d expect to earn magical power-ups to help you—say, a magic spell to thaw ice or a word-revealing mirror—but there are no special items at all.

The words you’re making aren’t specifically wizardry- (or anything-) themed—aside from those used to unlock the next level pack, such as “rune” to unlock the “ancient rune” pack, which is a nice touch—and the “magic power” you earn for success is just the game’s high score. We’ve actually wondered at times if the game had a different premise originally, since large green fronds are used as the between-stage transition and a recurring background is a dinosaur fossil encased in amber—was this initially Under a Spinosaurus? It’s tough to feel invested in this theme when the game is mostly just a series of aesthetically pleasing puzzles with a few nods to things magical on top of seemingly unrelated bits. 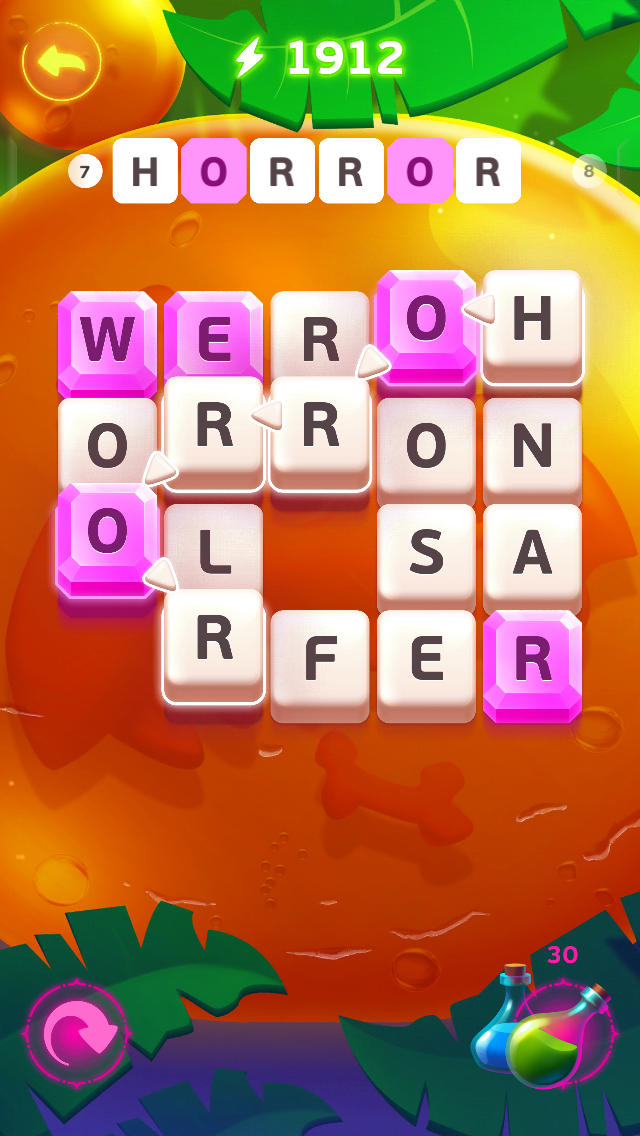 It’s a shame, because Under a Spell does a number of things very right. To begin with, it’s absolutely overflowing with puzzles, boasting 1,800 levels in each of its eight languages. Since the levels are somewhat randomized, you can replay past stages and receive different words, creating an essentially endless amount of content. It’s extremely generous with doling out hints, awarding them via daily gifts and through fairly simple missions—like “score 3,000 points” total or “get all stars in 10 level-packs.” We’ve yet to encounter any ads outside of the entirely optional videos to earn more hints. The puzzles themselves are fun to interact with: the tiles are extremely tactile and you can almost feel them “popping” when you select a letter. And the levels that contain some type of hint, such as the frozen or colored letters, are rewarding to complete.

But it’s everything else that simply doesn’t mix well. The random and underutilized theme, the massive amount of puzzles that don’t contain any guidance other than word length, and the extremely restrictive requirement that you must find words in order result in a game that’s often simply exhausting, that doesn’t have quite the magic we were hoping for.