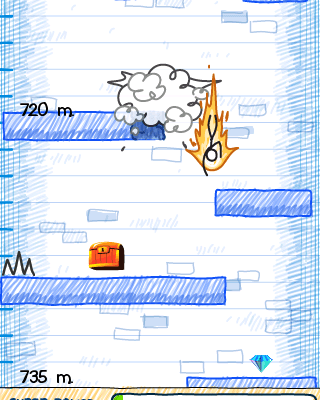 UltraDeep is a survival game that’s easy to “fall” for

Falling down can be a treacherous affair, but what if it’s your goal to just keep falling? UltraDeep is the latest game about surviving a fall for as great a distance as you can. This time, the experience drops you into a seemingly bottomless pit filled with deadly spikes, precious gems, and top notch doodles.

The gameplay in UltraDeep sticks pretty closely to a formula we’ve seen countless times before. It’s the same downward momentum survival-style gameplay that’s offered by games like FallDown! and Jungle Bug: Rock & Roll. Players will tilt their device in an attempt to safely guide the on-screen stick figure downwards as he avoids hazards and tries not to be crushed between a platform and the top of the screen.

Like most games of this sort, UltraDeep offers up its own assortment of power-ups. Players can climb into a cannon and get blasted through a number of platforms before slowing to a stop, or snag a little clock that will slow the speed at which the game scrolls downwards, giving you more time to get to safety. The most common boost players will receive is a “super power,” which simply means you’ll quickly smash through anything in your way as you fly deeper into the pit. This is activated by tapping the screen after you collect a requisite number of diamonds – and the diamonds are everywhere in this game. 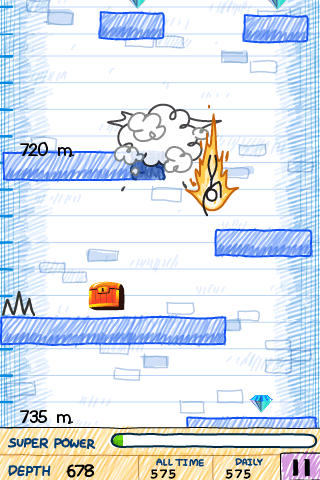 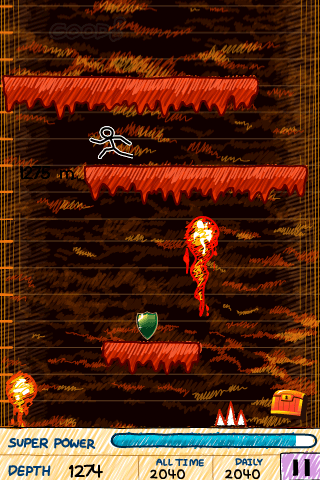 UltraDeep may feel fairly similar to a number of games that came before it, but that doesn’t mean it doesn’t have a few tricks of its own. Gamers who’ve been collecting those diamonds during their treacherous descent can spend them to unlock new power-ups and costumes. We were a little disappointed that the power-ups were really just new unlocks of in-game items rather than a way to actually boost the abilities of your character, but all in all it was nice to have new unlockables to work towards.

While the game whole-heartedly embraces the doodle art style, it seems to do so in a way that offers a certain unexpected level of polish. We may be talking about stick figures and pencil sketches here, but Viqua Games didn’t use that as an excuse to be completely lazy in the visuals department. Little touches, like the brickwork in the background, or the little animations that occur when crashing through platforms or being fired out of a cannon, really show that “doodle” was a conscious choice here rather than just a cop out.

Where the presentation managed to fall flat, however, was in the complete absence of a soundtrack. The lack of music seemed like an odd choice, but when you gather enough gems in a row the changing pitch of the twinkly collection sound seems to make music all on its own. Still – more and more iPhone developers seems to be ditching music, and it’s not a trend that we like.

Downward survival may be a well tread formula, but that doesn’t make UltraDeep any less fun. With charming visuals, tight gameplay, fast action, and the promise of unlockable goodies to work towards, UltraDeep manages to offer up a simple experience that’s hard to put down – even if it is a little too familiar.