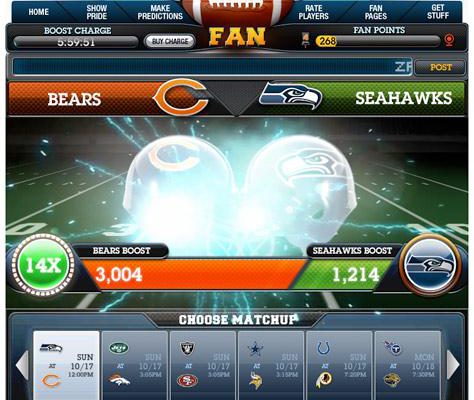 For some people, “liking” a NFL team’s Facebook page just isn’t enough. These are the fans that scream from the windows of their cars as they drive home from the latest game and plaster their bare chests with images of hawks and angry cows. Yes, some of them may even dress up their kids like a big-name quarterback for school photos. If you’re one of these die-hard fans (or even just a yard line away), then Arkadium’s Ultimate Fan might just be the Facebook game for you.

Especially, that is, if you like the New York Jets. Akadium partnered with the Jets to create Ultimate Fan, and unsurprisingly the only team-themed souvenirs you can currently buy for the “Pride” section feature their colors and logo. This is the game’s main social space, and if you’ve chosen to cheer for another team besides the Jets, its tailgate party theme ends up looking more like a post-game parking lot primed for ultimate garbage collection. Items such as hot dogs, bar stools, and even cheerleaders can be bought and slapped on the screen, thereby increasing your fan points (basically experience points), but making it look good takes a lot of toying with perspective. You can also rate your friends’ tailgate parties, increasing their rank on the leaderboards, and for 3,000 tickets, you can sabotage their tailgate parties with gruesome and humorous items like dead seahawks and blinded jaguars. 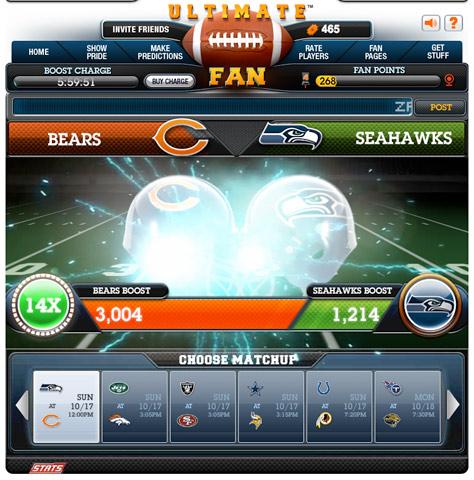 Beyond this, ultimate Fan isn’t really a game at all. Instead, as the name implies, it’s a more of a tool for sharing and expressing your fandom for a particular team as we head into the depths of football season. At the heart of the app are two footballs helmets representing your favorite team and their upcoming opponent. By clicking “Boost” every couple of hours, you can cause the helmets to slam into one another, and you’ll see how many fans are rooting for each team. For Facebook credits, you can buy an additional boost, or you can write a custom message for that match which will show up on the game’s marquee along with your name. (The focus on the Jets shows up even here, since the boost for their next game against the Broncos revealed an overwhelming 12,955 players in favor of the Jets over the Broncos’ paltry 1,750.) 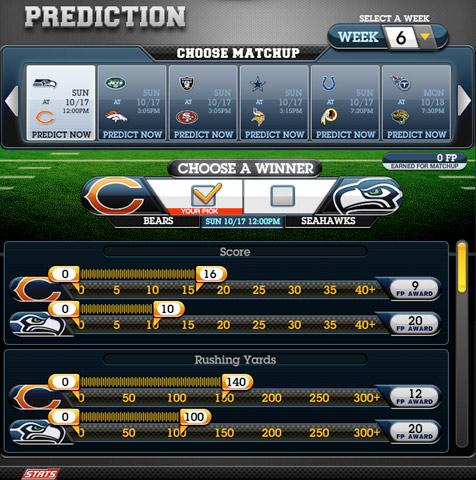 For additional fan points, you can predict the outcomes of the next week’s games for every team based on everything from the score to rushing yards and sacks, and your accuracy rate will show up on your stats page. In another window, similar to the Boost screen but without the oo-rah helmet banging, you can rate your team’s players and coaching staff according to dozens of different options ranging from coaching leadership to more specific factors such as whose kicker can make the +50 yarder. Lastly, your Fan Page allows you to see your own rating for all of these different sections as well as those of your friends, and a glance at the accompanying leaderboard will decide once and for all which one of you is the ultimate fan.

Virtually every action in the game aside from the boosting requires tickets, and you’ll only receive 200 per day. This isn’t such a bad thing since most votes in the rating section only cost 20 tickets and many of the vanity items for your Pride page are reasonably priced. However, more expensive items (such as a hot tub) will cost 10,000 tickets, and you’ll have to really loathe your friend’s team if you plan on dropping that 3,000-ticket “Busted Bronco” on his or her tailgate party. 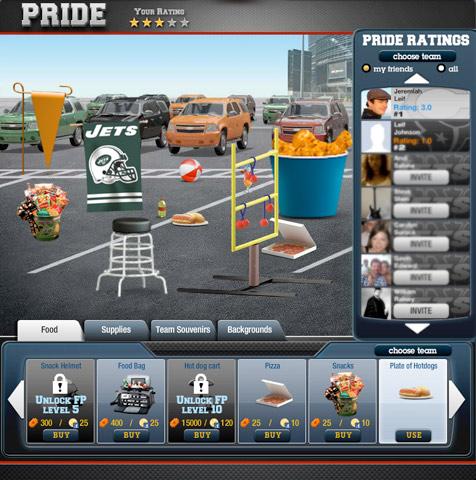 In the end, Ultimate Fan is a decent tool for expressing your love for a certain team, although vanity options for teams other than the Jets would make the game infinitely more enjoyable. Also, the predictions section would be significantly more interactive if you could compare your own predictions with those of your friends, but the Fan Page only allows you to see your friends’ accuracy rating with no specifics. Even the option to post on your wall only states that you believe that such-and-such team will win, without allowing you room to show your friends all the reasons why. Still, Facebook has needed something like this, and it undeniably provides a good online complement to this year’s football season. As it stands, however, it’s just a few yards shy of a touchdown.