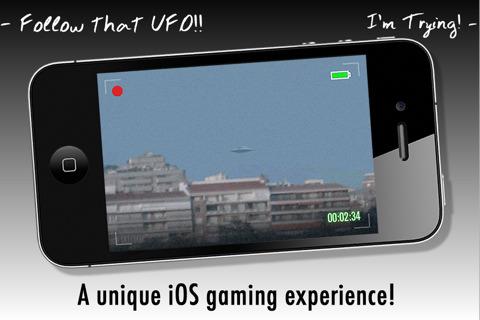 We live in a culture where most people walk around with recording devices in their pockets. As such, it’s hard to get away with anything without it cropping up on YouTube 10 minutes later. UFO on Tape suggests that even technologically advanced beings from another planet cannot escape our collective gaze.

Adopting a concept familiar both to fiction (in films like Blair Witch Project and Cloverfield) and real life (witness the person who recently filmed the emergency landing of the plane they were on), UFO on Tape puts you in the passenger seat of a car when a UFO pops into view. Responding to your excitable girlfriend’s prompts, you pick up your iPhone and start recording.

Gameplay is a simple matter of tracking the flight of the flying saucer by tilting your handset accordingly. It’s more difficult than it sounds, with the natural movement of the car you’re travelling in, lens flare from the sun and the UFO’s appropriately alien movements all serving to throw you off.

Conceptually, it’s like nothing you’ve played before, and that extends to the game’s marvellous presentation. Putting it simply, it looks and sounds exactly like you’d imagine such an event to look and sound. The scenery is startlingly convincing, with the passing cityscape (complete with passing birds) filtered through a grainy, low-resolution camera. You’ll even get a blurry, out-of-focus effect when the car door slips into view.

It’s all complemented superbly by the realistic ear-bashing you receive from your girlfriend, which also doubles as a handy indicator when the UFO slips off screen. She’ll quickly pull you up when you lose sight of your target, and is always ready with a superbly naturalistic prompt to shift over to the left or right.

It all amounts to a game that doesn’t really present itself as a game (other than the high score-friendly Gamecenter integration). Unfortunately, it could do with a few more gamey considerations to prolong its lifespan.

As good as it looks and as clever as it is, UFO on Tape lacks content. It offers just the one scenario, which can be tackled in just the one way, with no hint of hidden depth or any extras. 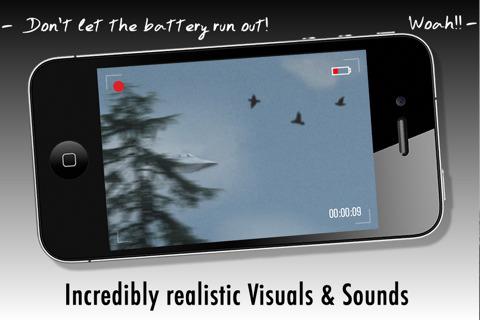 Also, the game suffers from one or two control issues (on our second generation iPod touch, at least). For one thing, the lateral movement controls comes across as a little counter-intuitive. While the realistic premise suggests that you should be able to point the back of your handset exactly as you would a real camera, it actually switches left and right around. Pointing your handset to the left pans the view to the right and vice-versa, which takes a bit of getting used to and destroys some of the carefully prepared illusion.

Mystifyingly, you can switch the Y-axis in the Settings menu, but not the problematic X-axis.

Additionally, I experienced technical issues with these controls. The game required a couple of resets before I could get the accelerometer controls working properly which, judging by other comments on the internet, is not an isolated occurrence. Keep that in mind if you’re considering a purchase.

And it’s certainly worthy of such consideration, especially if you’re bored of all the match-three puzzlers and perpetual-jumping games that have clogged up the App Store. While UFO on Tape is overly simplistic and a little hap-hazard with its control setup, it’s simultaneously one of the fresher iPhone experiences of recent times.