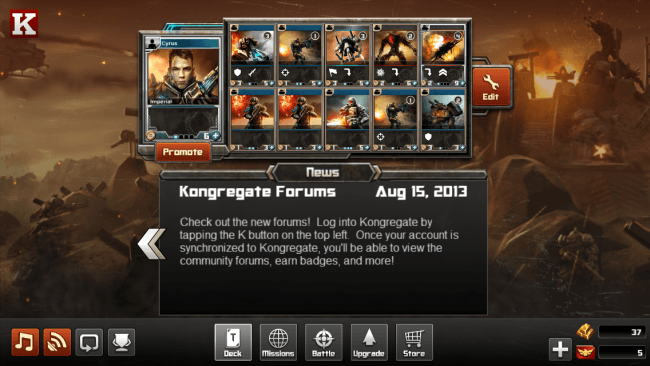 Collectible Card Games come in all shapes and sizes, so I wasn’t entirely sure what to expect with Tyrant Unleashed. Even now I’m still not entirely sure what to make of it. It’s a strange mash-up of a few different methods (particularly an emphasis on individual skills) that works pretty well. For the most part.

Tyrant Unleashed uses a fairly straightforward combat system. Players take turns playing cards (one is pulled from a three-card hand each round), lining them up in front of their Commander, and exchanging blows with their opponent until one of the Commanders is taken out. If two are in the same column they fight it out, whereas an unopposed card will deal direct damage to a Commander card. And since they’re arranged in a line, once a card is destroyed (i.e. loses all its health) all the others sitting on its right will shuffle down into place. As I’ve said, it’s fairly straightforward. The various card abilities (from counterattacks to healing) are what keep the matches interesting.

While the mechanics may be simple, Tyrant Unleashed can still be a rather strategic game. It’s all thanks to the skills, really. Cards that deal 1 or 2 damage and have a few points of health are decent fodder, but once players start to get their hands on cards that use shields or can randomly increase a friendly’s attack, then things get more complex. In a good way, of course. The more powerful cards also typically have a specified amount of time that players will have to wait until they “activate,” so simply tossing a strong card down in the beginning isn’t necessarily the best option. Unless it’s intended to be used as a sort of meat shield, anyway.

The upgrade system is also interesting in that players can only strengthen their cards by trashing others. However, rather than the typical means of infusing one with the power of others, the sacrificed cards are scrapped entirely and turned into Salvage, which can then be used almost as a form of currency to make another card stronger – up to a maximum level of three. These aren’t incremental improvements, either. Simply jumping from level 1 to 2 can give a card a big boost to attack and/or health, as well as often adding (or improving) more abilities.

The game also looks pretty nice, although the description text in the Deck menu – as well as in the story synopsis – is super tiny on an iPhone 5 screen. Still, the animations are neat and the illustrations are quite awesome. That being said, the option to fast-forward through fights or make use of an autoplay function which places cards for the player automatically is very much welcome. 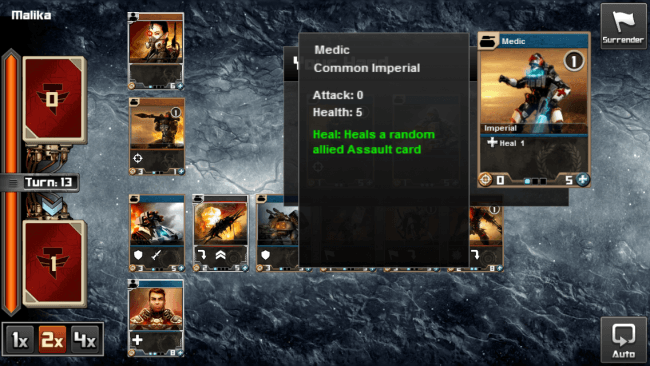 What bugs me about Tyrant Unleashed is that the mechanics just aren’t all that fun. It’s a very solid system, but it also doesn’t feel anywhere near as engaging as other CCGs. Even with the use of skills and special wall cards, all the battles start to feel the same very quickly. The ability to speed up fights and have the computer make all the decisions makes the grind for more cards a lot more bearable, but then it makes one wonder what the point of even playing in the first place might be.

I don’t mean to imply that I haven’t been enjoying Tyrant Unleashed, because I have been; but playing for extended periods can start to feel pretty tedious. I’d still recommend it for most CCG fans. Although I’m not too sure how long it will hold everyone’s attention.