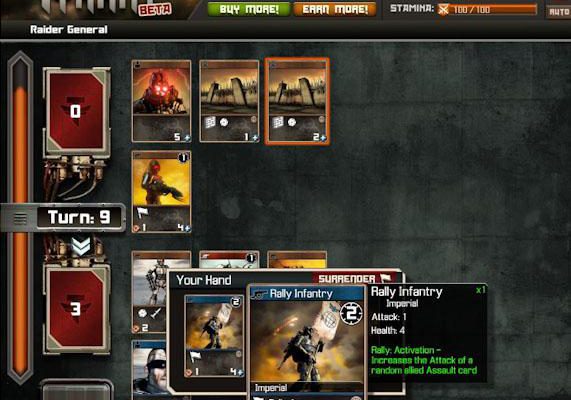 Hours of fun are in the cards with War Metal: Tyrant, despite a few reservations.

War Metal: Tyrant is a collectible card game (CCG) for Facebook, which prompts one to wonder if the venerable pastime isn’t going the way of the paper book after the successes of similar titles like Zynga’s Warstorm. That seems unlikely for now, but it isn’t because games like Tyrant don’t give their physical counterparts a decent run for their money. While it suffers from mildly disappointing artwork and questionable strategy, Tyrant comes closer to mimicking the gameplay of a real CCG than any of its competitors.

If you’ve ever played Magic: The Gathering, you can jump into Tyrant and start playing within seconds. In fact, anyone can—thanks to the absence of mana cards and the like—which means that veteran players might find this experience a little too watered down, despite its strengths. These strengths include a considerable measure of control over what you include in your 10-card playing deck (an advantage Warstorm never had), and the opportunity to duel other players or partake in lengthy raids with your friends. You can also join guilds with other players, and you can earn rewards by building up your reputation with several of the game’s factions. 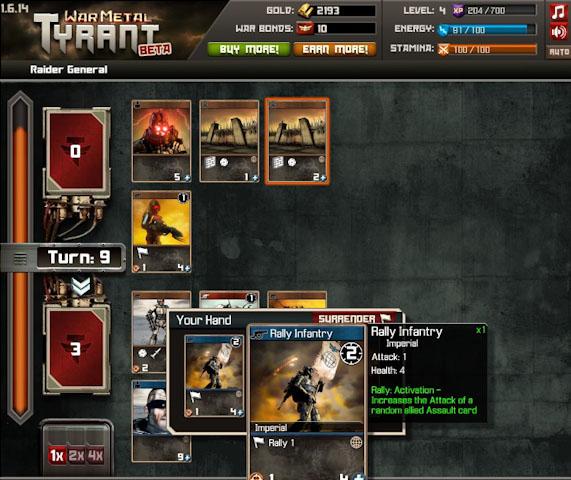 As with a real collectible card game, you start your adventure with a starter pack that gives you a random sampling of cards. In this case, you begin with a commander and a few infantry units, the former being the offensive target of each match. You can hold 10 at a time, although you need to choose which cards you bring with you into battle from your complete deck before each round. From here, you play with one of three randomly selected cards from your 10-card deck for each turn, although the order in which you play them never seems as important as simply bringing the strongest cards you can for each match. You can even use cards from enemy factions, although doing so will make you miss out on bonuses if they differ from your commander. As you progress through the campaign, you can buy additional cards either through premium currency or the gold you earn for winning each round.

It’s worth noting that Tyrant is actually a sequel to an earlier War Metal game (which first appeared in 2009), which means that the game’s basic storyline might leave new players a little bewildered if they haven’t played the first. That never really matters since gameplay is always the focus here, however, and players tired of the genre’s dominant fantasy elements might find a welcome diversion in Tyrant‘s Warhammer 40,000-styled plot and visuals. 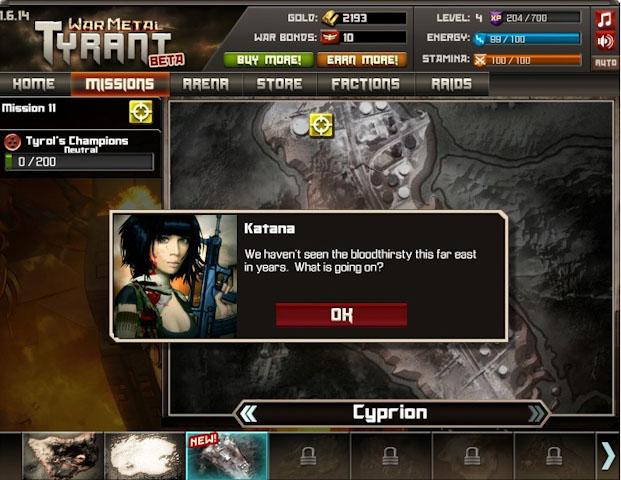 One of the greatest attractions of games like this is the art on the back of each card, but Tyrant stumbles a bit here since you never really get to see more than a thumbnail of the cards and your deck. In addition, even though the early stages fly by thanks to a generous energy regeneration rate, players at the higher levels will find themselves only able to play for a few minutes at a time thanks to the energy costs of new missions. Since Warstorm features unlimited energy, this alone is probably enough to keep some dedicated players away.

Overall, Tyrant is a satisfying social diversion for veterans of CCGs, and an excellent introduction to the concept for newcomers. It’s also obvious that the developers truly enjoy the genre, since Tyrant features a constant stream of new cards and abilities that keep it feeling like a dynamic experience. But it never provides an experience unequivocally better than Warstorm, its chief competitor. If you’re interested in playing CCGs on Facebook, we suggest giving both a spin for a level or so and making your decision from there. Despite the gameplay strengths of War Metal: Tyrant, you might find that Warstorm’s visuals and unlimited energy render it the better game.