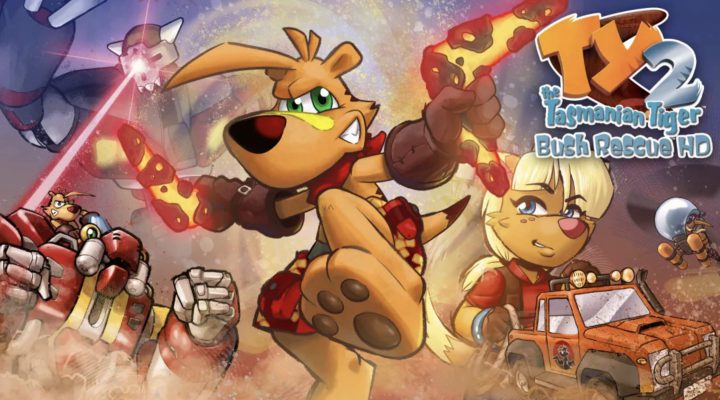 More variety than the first game

Offers up a good challenge

Execution of ideas leaves something to be desired

The TY the Tasmanian Tiger series came and went with little critical fanfare in the early 2000s, offering up solid yet unspectacular 3D platforming hijinks. It was ultimately outshone by the many better alternatives available.

Now is a more troubling time for 3D platformers though. So few are released that the re-introduction of the first two TY games onto the Switch seems a solid plan. And they certainly help to scratch a certain itch, offering up sizeable adventures suitable for younger audiences.

Let’s make no bones about it though, the TY titles are far from being classics. Time has not aged them like a fine wine – despite the credible HD remaster jobs.

This second entry definitely improves upon its predecessor, but it’s still not a consistently fun experience. Even though it starts off like a house on fire.

Because whereas Ty the Tasmanian Tiger was bogged down from the off by irritatingly long tutorial sections and immensely dull cutscenes the sequel cuts out these two elements from the get-go.

Because now instead of slowly being shown the ropes you’re flung into a level where everything is exploding, characters are fighting each other, and you have a new type of challenge flung your way every few seconds.

Within the first five minutes you’ve battled a swarm of minions, smashed up roadblocks with a mech, and manned a gun turret.

Now on paper this all sounds massively exciting. But Bush Rescue’s big problem is that it never executes its ideas particularly well. Just going from the explosive opening, the issues start to pile up. Namely that combat is dull and too often one-note, with enemies barely putting up a fight.

Then the unique sections – such as the aforementioned gun turret – are often poorly put together and needlessly confusing.

Despite the energetic opening Bush Rescue does calm down, and turns into a more open and sedate adventure.

But we’re not sure that changes things too much, as the same grievances remain with the core mechanics. They’re slightly easier to forgive when the game isn’t throwing a new idea at you every chance it gets however.

There’s your usual load of collectibles, but they do generally serve a purpose – such as improving your boomerang weapons, of which there are many. The variety in locales is also welcome, and there are even kart racing sections that – surprisingly – aren’t entirely terrible.

The level of challenge is a bit higher than you’d expect from a 3D platformer nowadays too, which is slightly endearing. And that’s not always because of the questionable camera either.

Even so, Bush Rescue is a hard game to fully recommend, especially at its high price-tag. Those looking for a sweet hit of nostalgia won’t be disappointed – this is an excellent port and runs smoothly in handheld and docked modes – but anyone expecting a hidden gem will only find a title with a rough edge too many.