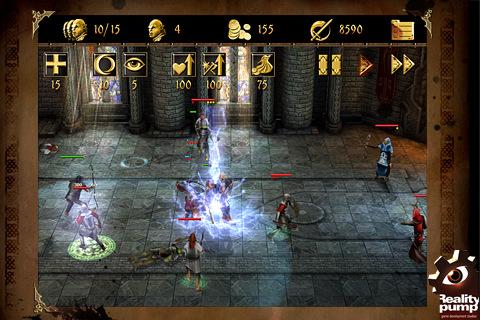 Why, hello there, Disposable Peon #23! Welcome to the glorious career of serving in the Emperor’s Guard (just ignore your predecessor’s body on the floor there, we’ll get that cleared out of here in just a moment). Here’s your sword. And your shield. Oh, look, and here come the Orcs, just like clockwork. Do us a favor, try not to die, will you? It’d really disappoint the Emperor to, y’know, be slaughtered by a bunch of bloodthirsty monsters. Oh, and welcome to Two Worlds II Castle Defense, too.

The game’s plot is detailed to the point of being incomprehensible, especially if you haven’t played the parent console title this is based off of. There’s something about orcs and sorcerers and… um… protecting your king for reasons that feel a bit jumbled. Honestly, though, here’s all you have to understand: your monarch is on one side of the screen, and it’s up to you to keep him alive for as long as possible.

Essentially, this is a combination of tower defense and RPG genres. Players select nodes and assign different types of units (fighters, magicians, archers, etc.) to them. These units will go toe-to-toe with the invaders as they cross the screen, and players have to make sure their forces stay alive during each wave. There are a couple of ways to keep units’ health up: players can cast healing spells, or they can place a priest nearby to automatically heal other friendly units.

At first, managing teams is easy, but the game isn’t afraid to become punishingly difficult rather quickly. Soon, you’ll have to figure out which characters need to be leveled up, how you should arrange them, and be ready to cast healing and killing spells in order to help your defenders as they fight to survive. Battles quickly become frantic affairs that require a lot of strategy to beat, but they never stop being fun.

Aside from the five (massive) campaign levels, the game also contains an arena, which is basically a survival minigame. It’s not all that different from the main game type, but players have fewer areas to place defenders and the waves of enemies come a lot faster. 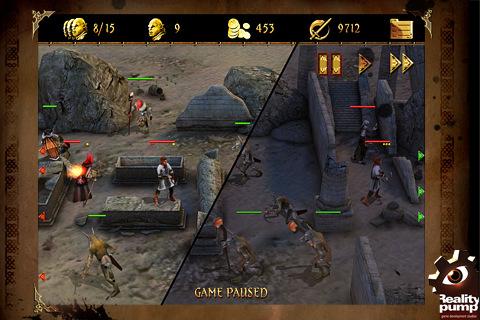 It’s kind of surprising how good the game actually looks. The environments are nicely detailed, different character types are discernibly different from one another, and everything is animated nicely. That said, there are a few quibbling matters; several of the levels are kind of dark, and it’s hard to make out detail unless the brightness is turned way up.

The sound, too, is pretty well-polished. The soundtrack is apparently ported straight from Two Worlds II, and it sounds pretty great. The music is sweeping and epic, which feels appropriate given the game’s fantasy setting.

There’s a lot to enjoy in Two Worlds II Castle Defense, other than its name. It’s deep and challenging and has a ton of polish that isn’t commonly seen in iOS devices. If you’re a die-hard tower defense fan, you’ll probably want to check this out.