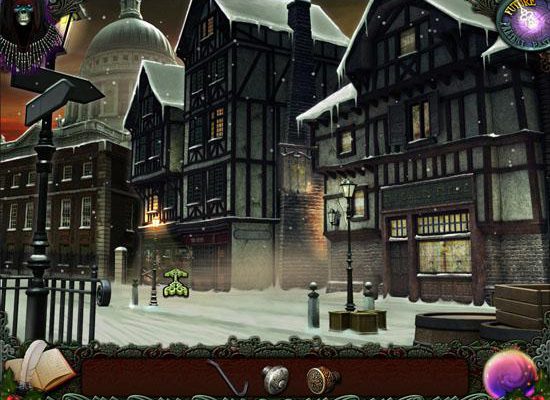 Twisted: A Haunted Carol feels like the HOG equivalent of a lump of coal

When I was young, my dad would tell me that if I didn’t quit messing around I’d get a lump of coal in my stocking for Christmas. Modern dads with techno-savvy children have a better option: threaten them with Twisted: A Haunted Carol instead. It’s easier to get hold of, not nearly as messy and about the same amount of fun when you play with it.

If you’re familiar with the Charles Dickens classic “A Christmas Carol,” then you know that Ebeneezer Scrooge is an old miser and all-around jerk who gets a visit on Christmas Eve from the restless spirit of his former business partner Jacob Marley. Marley introduces him to the three Christmas Ghosts, a Yuletide trio who aren’t nearly as friendly and festive as the name makes them sound, and thanks to their efforts Scrooge is redeemed on Christmas morning, becomes a stand-up guy, buys a turkey, et cetera. All is well. 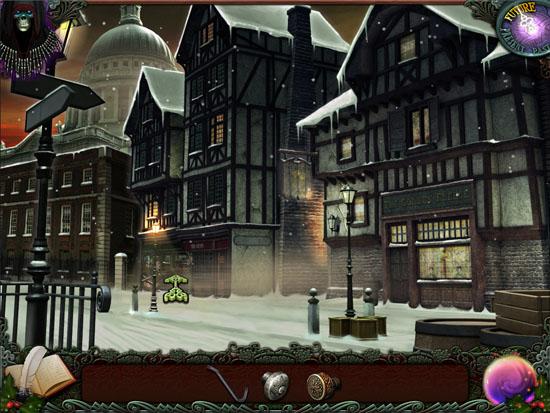 But in Twisted: A Haunted Carol, as you might guess from the title, the story takes a twist. In this telling of the tale, it turns out that Scrooge actually murdered Marley for reasons that are never entirely clear, so Marley’s ghost teams up with the Holiday Haunters to get some payback. It’s a promising setup that sounds like a lot of fun, but it all goes wrong in a hurry.

In order for a hidden object adventure to be any good, it needs two things: hidden objects and adventure. Sometimes you can get away with going a little light on one if the other is really, really good, but if they both suck, you’ve got a problem. So when you notice, as I did, that the hidden object searching in A Haunted Carol isn’t very good, it’s natural to feel a twinge of concern. The HOG scenes are perfectly functional, but way too easy. Soon after that you’ll discover the adventure side of the game is similarly soft. Just about everything you need to accomplish every task you’re given will be provided to you immediately before you need it, and because each individual section of the game is tiny, typically comprised of three or four rooms with very little to do in each, you won’t find your concentration overly taxed as you try to figure out what to do to move things along.

One particularly annoying aspect of the game is its infuriating insistence that everything you find is strictly single-use. I know that “use it and lose it” is fairly standard procedure for adventures, but A Haunted Carol handles it especially poorly, requiring different tools for virtually identical jobs in adjacent rooms. At one point you’ll be required to pry up some loose floorboards in a room with a hammer, and then in the next room some wall boards will also have to be removed. “Why, I’ll just use this handy-dandy hammer,” you might think, but wait! The hammer is gone! It was apparently the most fragile hammer in the world and since you used it once and I guess broke it, you’ll have to go running around looking for something else to pop off this new set of boards. 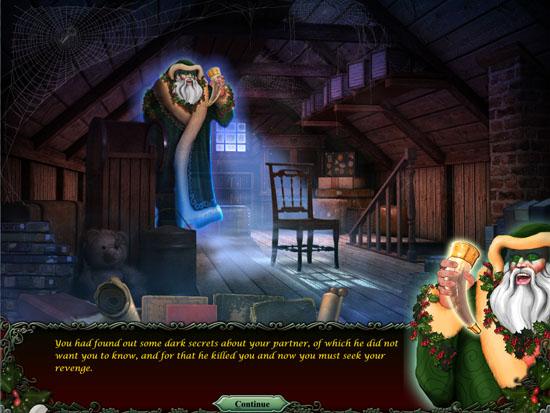 The good news is you won’t have to go running far, because there are only four rooms in this part of the game and you’ve already been through two of ’em. That kind of ties into the other inadvertent upside of A Haunted Carol: it’s hilariously short. Speaking generously, I’d say I wrapped it up in about an hour and a half, but I think an hour and twenty minutes would be closer to the mark. Honestly, if I’d known it was going to be that short I’d have put the pedal to the metal and tried to finish it off in under an hour. I’m pretty sure I could’ve done it.

The mid-19th century setting looks decent, although most locations and hidden object scenes don’t offer much in the way of detail. There’s no music to speak of; instead, the game relies on spooky ambient sounds, like creaking doors or approaching footsteps. But even that doesn’t contribute much to the atmosphere, because there are no doors opening and nobody’s approaching and there’s really nothing spooky about it at all.

Take my advice: Download the demo and see if you can plow through the whole thing in an hour. Or better yet, make your kids do it. It’s a great way to stick it to ’em for being bad, and you won’t end up with coal dust all over your floor.