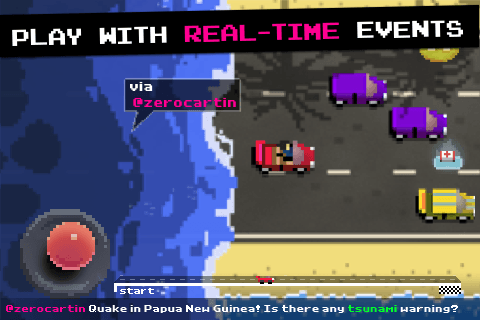 Tweet Land offers up a unique concept, but it’s execution is both poor and morally misguided

In Tweet Land, your job is to drive your car from point A to point B while trying to sideswipe other cars off the road, in sort of a Bump N Jump sort of way. While doing this, different events unfold to throw up obstacles that are all triggered by real life tweets. Someone mentions “meteor” on Twitter, and boom! One hits the ground in front of you. It’s an interesting idea with a fun retro mechanic. So how did Tweet Land end up being both not fun and morally disgusting?

Tweet Land fails on two very critical levels. First off, the game itself isn’t very good. The collision detection of hitting the cars and obstacles is terrible. There were times where I would hit a mine in the road, but be nowhere near it. The car accelerates by itself and moves too quick to really be able to avoid any of the obstacles. It’s terribly unbalanced, and you win by luck way more than you ever do with skill. It’s just no fun, and failing a level right before you finish leaves you with a feeling of wanting to put it down and walk away, rather than feeling challenged to try it again.

If that were all there was to the game I’d say it’s a noble first effort that needs some work, and with some tweaking could be something playable. But the game also fails spectacularly on another level, and it’s in how the game decides what obstacles it’s going to throw up in your way.

The selling point of the game is that it uses people’s real-time tweets from Twitter to cause things in the game to happen. So if someone tweets with the keyword “health” in it, then a little health pack floats across the screen. Or the term “police car.” Some of them are pretty varied like “raging bull,” “turret” or “car accident” that actually causes the cars in front of you to crash out of your way to give you a free path.

It’s a really neat idea at its core, to let real world events impact the game you’re playing. But let’s think about that a little deeper. I just got a bonus for someone tweeting about “car accident.” I got points for it. I was supposed to derive a feeling of satisfaction out of it. At the end of every round you can see the tweets listed that triggered the events that just happened. So what caused those car accidents in game? Tweets like…

“Bestselling author died in car accident:I am so so sorry. Why don’t we cancel events in such weather?”

Am I supposed to have fun knowing that’s what is powering the game I’m playing? People’s misery? What if someone died in that car accident that that middle one was laughing about? Someone’s kid, or mother? Those thoughts and tweets continue when the game starts looking for keywords like “earthquake” to shake the entire screen or “terrorist” where, I kid you not, a van will drive up onscreen and toss around bombs. Someone makes a tweet about a terrorist attack in real life, you see the humorous effect in game.

There’s a fun game here somewhere with this idea, for sure. But instead of focusing on terrible ideas and events to pull into a game, why not happy or at least non-objectionable ones? Why not have a Tie-Fighter fly past when someone tweets about “Star Wars”? Or have a Yeti bound through and wreck shop when someone tweets about “snow?” Someone mentions an “auto race”, give the player a speed boost. There are endless ideas out there that could be fun/zany/memorable instead of taking the low road with something like “terrorist.”

Sure, not all the keywords Tweet Land finds and uses are terrible, and there are some good ones in there like “Friday” and even something like “nimbus” for us Harry Potter fans. Then you see something like “emergency landing,” and a plane crashes onscreen and you know that’s because someone was tweeting about almost dying in a real life plane accident.

When a game decides to incorporate peoples’ real lives without their consent and turn them into game elements for us to enjoy, looking for keywords like “tsunami”, “terrorist” and “death” is just abhorrent. I could go on and on, but I’ll leave you with this which makes my point better than I ever could. A tweet that triggered a grim reaper riding on flaming horseback to run across my screen. “First Grandma, then stepdad dies. Now Joseph is sick and in the hospital. Work with me God.” That person’s grief in no way shape or form should be twisted around for our amusement. Shame on them for trying to do so.