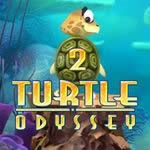 A good casual game should not only be hard to turn off when it’s time to get back, to, well, life – but it should also tug at your thoughts to the point where you’re itching to sit back down at the computer and resume playing whenever you have a spare moment.

Realore Studios’ Turtle Odyssey 2 is this kind of game.

At first, I wrote off this arcade-like “platformer” title as a mere Super Mario Bros. clone – you know, run from the left of the screen to the right, pick up items, jump on enemies and find the end of the level – but at some point in the third world I realized this surprisingly addictive game had nicely built upon this familiar formula.

In this sequel, you once again play as Ozzy the Turtle, who accidentally cracks a slab of ice and lets a mysterious creature go free. So he takes it upon himself to begin an underwater adventure through six magical worlds, spread out over 50 levels, to restore the world back to normal.

As Ozzy navigates through these watery levels, he can jump, double-jump (to reach higher levels), kick objects towards enemies, shimmy or swing across ropes, and ride seahorses for added speed. Interestingly, the game makers let you control the action using either the keyboard, the mouse or an optional gamepad.

Enemies include spiky fish and poison flowers you must avoid, octopuses you must jump on, crabs that require two jumps to destroy, and boss characters such as huge pearls you need to let fall asleep before pouncing on it. In total, there are 17 unique underwater enemies.

All the while, Ozzy must collect coins, treasure chests and gold bars to rack up points, as well as find hearts for extra lives, red jewels to open the door to finish the level, and lucky stars to spin a roulette wheel and win bonuses at the end of each level (such as more armor for Ozzy, an extra life, or bonus timed levels where you have 60 seconds to collect as much money as possible).

At the end of each level players can also win awards (viewed in the swank Trophy Room) if all enemies are destroyed, all monies are collected and all secrets were found. Oh yes, perhaps as a nod to the Super Mario Bros. games, Turtle Odyssey 2 features many hidden levels (at least two per level) that rewards players for exploring the sea, with more treasure to be found.

The story, however, can get a bit hard to follow, perhaps because of the poor grammar at times (the game makers are Russian). Examples: “I had a wonderful time in Arctic and I met a strange heavily fury fish,” followed by “There are no such!” Ah well, as fun as this game is, you’re really not playing to see what happens in the story next.

Another small beef is the inability to play past levels. Once you complete a level, it would be nice to be able to play it again as often as you like.

Minor shortcomings aside, Turtle Odyssey 2 is a fun and colorful platformer adventure for gamers 4 to 104. It may not win any wards for ingenuity but it definitely grows on you to the point you can’t wait to see what’s next for Ozzy.