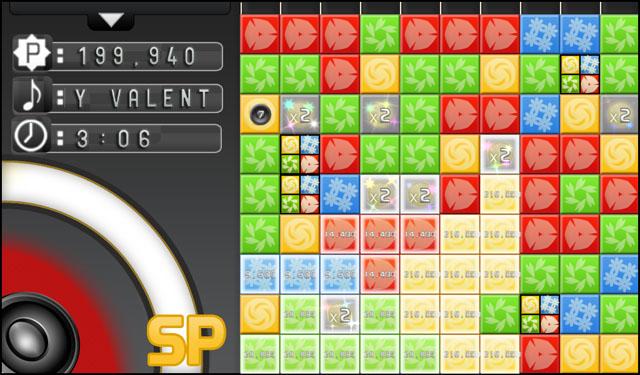 Match-three puzzlers always used to be such dependably sensible games. Then Lumines came along and introduced pumping techno music and striking laser-show visuals to the mix, and poor old Tetris had to go for a lie down. Turba looks to add to this funky sub-genre with the twist of being able to add your own music into the mix.

Turba‘s method of matching blocks is one of the simpler ones we’ve encountered – at least on the surface. While you have the ability to slide blocks of two up and down their row, it’s a useful option rather than an absolute necessity. The main mechanism involves left-clicking and dragging on three or more coloured blocks of the same colour, or clicking on them individually, and then right clicking to make them disappear.

This manual detonation means that you can set up enormous multi-coloured combos before pulling the trigger. Indeed, you’re actively encouraged to try and link matches in all four colours in order to get mega points.

That’s the easy bit. The main challenge comes in dealing with the threat of Beat Blocks – ticking bombs that count down with the beat of the music track (more on that in a bit). When they hit zero they turn surrounding blocks black, which makes them impossible to chain. It’s imperative that you link these Beat Blocks before they explode, although this can be annoyingly tough when you only have partial control over the orientation of the surrounding blocks.

There are also Silver Blocks that serve to double up your score multiplier when incorporated into combos.

As mentioned, beat-matching plays a part in Turba – although it’s not as pronounced as the blurb would have you believe. The idea is that you detonate your combos in time to the music in order to receive a modest score boost, but in reality the general gameplay never seems to be quite keyed in with the music in same way as, say, Lumines manages.

We never really entered that blissful zone where you’re barely thinking any more, just reacting to the sights and sounds on an almost subconscious level. That’s nothing to do with the quality of the sights or the sounds, however. Both are absolutely fine, with a bright (if slightly cluttered) visual style and some decent electronica tunes. 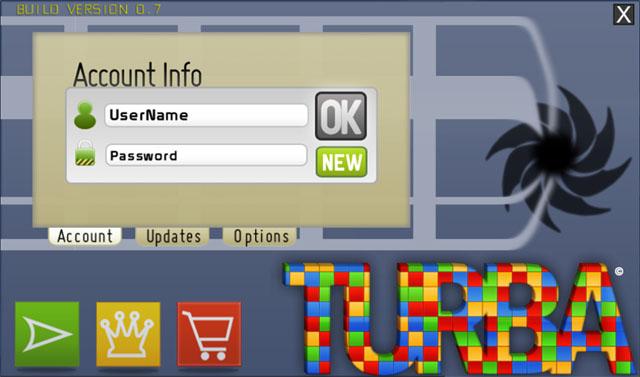 Rather, the problem is with nature of the gameplay, which juggles too many elements for its own good. The control system, while initially simple, ultimately bogs you down with deselecting unwanted blocks and rushing through matches in order to get rid of Beat Blocks. The beat matching element gets a little lost in it all.

Still, there’s plenty more to praise Turba for. Its multi-tiered approach to match-three puzzling is absorbing in a different way to the rest, making for a game that will slowly get its hooks into you rather than grabbing you early on and dropping you soon after. A rare achievement indeed.

The way you can import your own music, too, is a welcome feature. While added tracks with trickier, less obvious beats seem to throw the beat-matching system, the fact that (as mentioned) this isn’t a particularly vital element means it’s not a massive issue. It’s just nice being able to play a decent puzzler to a semi-interactive soundtrack of your choosing.

There’s plenty to get your teeth into here too, with no single standout ‘lead’ mode among the three on offer. Freeplay is perfect for a quick, unhurried bash, playing through a single song and encouraging you to build whopping great combos. Ascend and Descend hurry you along a little more, with new blocks spawning in from above or below. 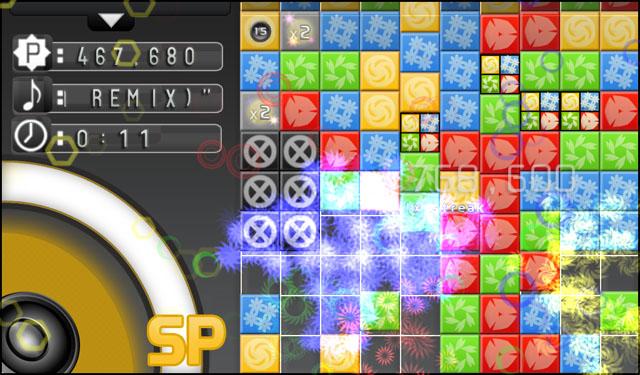 The latter two modes allow you to post your scores to a global high-score table, so you can see if your combo-building abilities are as hot as you think they are. For the record: mine aren’t.

Power-ups are present and accounted for, although in an interesting twist they only become available once unlocked, and can then be upgraded further with prolonged play. In a similar way, additional modes and gameplay modifiers become unlocked as you reach certain milestones (such as clearing 750 combos).

We have mixed feelings about this – on the one hand it’s great to reward the persistent gamer. On the other, it’s easy to become resentful of a game that makes you graft just to access the complete experience. It rather goes against the casual gaming ethos.

But that’s evidently what Binary Takeover is aiming to do with Turba. It’s an uncommonly involved (if not instantly loveable) puzzler that asks far more of you than most other games in the genre. If you’re looking for something a little different and with a slightly longer-term appeal, this could well be your game.