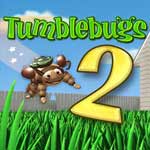 Its been argued the best way to create a successful casual game sequel is to deliver much of what made its predecessor worthy of a follow-up, yet introduce new features to justify the purchase. Tumblebugs 2, from Australia’s Wildfire Studios, concentrates too much on the former, delivering very much the same experience as the first game despite a couple of new additions. This sequel to one of the best-selling 2005 titles is indeed a fun diversion, but it’ll likely feel like a case of deja vu for many players.

Those menacing black bugs are back, so the colored beetles turn to Tumble and her garden friends to fight back and save the day. Such is the story that leads into the familiar Zuma-style arcade game-play. As Tumble, you’ll find yourself near the center of the level and can rotate around in 360 degrees. A long string of multicolored balls (imprisoning bugs) will snake out onto the level and slowly moves towards a hole in the ground. Your job is to fire a colored ball from your beetle so that it makes a match of at least three same-colored balls on the chain (such as orange, green, blue or purple), which causes them to explode, presumably freeing the bugs. The level is over when all the balls have been destroyed (good) or if the chain reaches the hole in the ground (bad).

If you want to swap the ball your beetle is about to fire, you can exchange it for two others on Tumble’s back by clicking the right mouse button. For example, you might be about to shoot a green ball but see you want to make a blue match so you can change it to yellow, and then blue with a second click, before firing. You’ll see the available colors on Tumble’s back.

As with many other games of this kind, Tumblebugs 2 also includes power-up balls that perform something helpful when you make a match with a little icon inside. These include one that stops the chain temporarily or reverses the chain’s direction, others that explode nearby balls or all the balls with a specific color, or one that gives you an aiming aid.

Players will also have access to “wildcard” balls that can be used as any color, as well as friends who appear on the level to give you help, such as a frog that – when you shoot a ball at him – will stick his tongue out and eat some colored balls for you, or the butterfly that will change all surrounding balls to a specific color. A strategically fired “gap” bug can open up part of the chain so you can fire the ball behind it, perhaps to another part of the chain.

Some levels have a slight twist to them such as the ability to collect the words E-X-T-R-A (letters will be found in some balls) for extra lives and other goodies, while a Frenzy round means the balls snake out much faster. All of them let you collect gold rings for bonus points. Speaking of which, the last two levels for each of the main stages are bonus rounds where you have a limited time to shoot at as many rings as you can and another one to see how many colored balls you can remove quickly.

In total the game features 90 levels spread out over 30 backyard scenes, so there’s lots of gameplay here. Players will travel through gardens and lily ponds, across sandy and grassy spots, over newspapers and bridges, and near drainpipes, patio stones, fences and grills. It’s not just the background art that is different but also how the chains move about the level. In some levels there are many holes in the ground in which the chain bobs and weaves through, making it more difficult to hit your target. Other levels have warp pads you can zap to in order to change positions, new colors introduced, and other fun twists.

The main gameplay modes include Endless and the unlockable Rescue mode, which seems very similar to the former but offers shorter levels.

Tumblebugs 2 is a decent sequel that is enjoyable and attractive, but it doesn’t take any risks by introducing something new to the genre. It’s a “more of the same” scenario, which might be fine for some, but it would’ve been great if Wildfire infused a little “wild” or “fire” to freshen up this sequel.