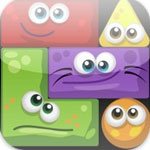 Many years ago, I remember competing with my brothers for a try at a new game on the monochrome GameBoy device. Everyone who played it just couldn't put it down. We all wanted to get the highest score, and for some reason we never tired of making lines to erase the dropping blocks of varying shapes. Like the rest of the world, we were smitten with Tetris, a new kind of fun that would endure as one of the most unique game mechanics of all video games. Every since then, game developers have been trying to figure out ways to emulate Tetris and create a game genre without violating the copyright. Ideally, a worthy extension of the “stacking blocks of different shapes” category would add lots of variety and challenges. There are many out there who've tried and come up short. I think Tumble Jumble comes close.

While Tumble Jumble borrows heavily from Tetris, it adds two important innovations. Unlike Tetris, the Tumble Jumble blocks (which are actually intergalactic rodents you must remove) are affected by gravity and they move after you place them. The addition of physics-based mechanics means that your block-shaped rodents don't snap to a grid, like in Tetris. Instead they can slide and collide and cause you difficulty, much like in Topple. This little wrinkle provides a variety of challenges when you consider that round shapes, squares and triangles don't exactly fit together. . . so there is always give and take and room for movement which you have to allow for when you place the shapes. You do have a lot of control over the shapes as they drop, but you can't always predict what will happen after they fall.

The second innovation (or improvement) on the Tetris mechanic is the variety of power-ups and obstacles that make sure you're always on your toes trying to complete each level. You have lasers to avoid. Enemy critters that kill your oddly shaped rodent packages. Pellets that make your shapes grow. Pills that make your shapes shrink. And a combination of shapes that always seems to be impossible to fit into the confined space until you try several times and figure out the solution to the puzzle.

Tumble Jumble is a colorful physics-based puzzler with a wacky storyline, crazy cartoon graphics, and lots of fun sounds and spunky music that keep you amused through 60 challenging levels. Of course, you can always stop and compare your ranking (how fast you completed a level) with other players via a global online leaderboard, or brag via Facebook. The only quibble I have with the game is a level balancing issue. Some levels are much harder to pass than others within the same block or stage. I don't mind having some variety, of course, but when one level takes me 3 times to pass and the next level takes nearly 50 tries before seeing that 'level complete' graphic, I have to think the developers might not have tested the game with players who were unfamiliar with the game.

While it's not the next Tetris, Tumble Jumble is a worthy addition to the sub-genre of 'dropping blocks of varying shapes' puzzle games. At $.99, it's a terrific value. I guarantee that it will deliver far more than a dollar's worth of fun. . .and you might find yourself reminiscing about the first time you played Tetris, a memory I will treasure forever.