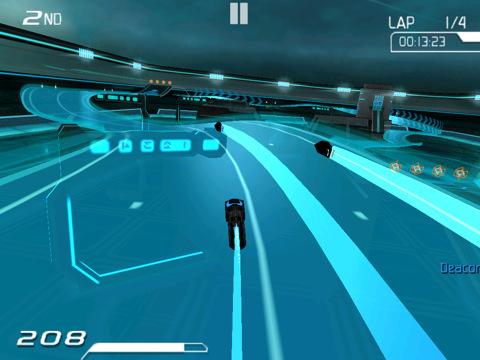 After a 28 year wait, fans of Disney’s sci-fi classic were treated to a sequel this past weekend as TRON Legacy opened in theatres everywhere. But while the movie was brilliant fun, Disney’s attempt to cash in with an iPhone game is anything but.

TRON Legacy for the iPhone doesn’t follow the story of the movie – in fact, it doesn’t offer any story at all. Instead, the game is little more than a collection of stages comprised of two modes; racing and on-rails shooting.

The racing, as anyone who’s seen either movie might expect, comes in the form of a lightcycle competition. In the films, light cycles are futuristic motorbikes that create a solid wall in their wake which they attempt to smash their opponents into. In the game, however, racing amounts to little more than a standard jaunt around a track.

It’s not a very exciting jaunt, either. Races are limited to very few opponents on the track at once. The trails created by your lightcycle are totally ineffective unless your opponent is right behind you – and even then they just provide something for your opponents to bump off of. Power ups that you collect seem to offer no real benefit. The tracks, while visually impressive, offer a relatively uninspired design. The tilt steering never really feels like you have enough control. And the competition is always lopsided, with you in the loser’s circle. In a word, lightcycle racing in TRON Legacy is dullsville.

It’s not a dull trip you’ll have to suffer alone, however, as lightcycle competition is available online to compete against strangers. And since you’ll both be suffering with the same frustrating controls, the playing field is a little more level than when playing against the AI. 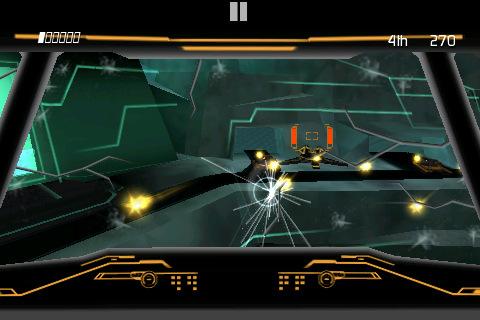 The game’s second mode places you behind the turret of a Recognizer, a giant slow-moving vessel that looks like a Greco-Roman entranceway, as you try to blast anything that moves. Why the game tasks you to go on such a rampage remains unclear, but it hardly matters when you’re treating the world of TRON like a penny arcade shooting gallery.

Like any rails shooter, movement is handled by the game automatically, while your only task is to aim and shoot before you move on to a new area. Aiming, like steering in lightcycles, is handled by tilting you device. While it’s certainly a shooter experience at its most basic, blasting lightcycles and tanks from a Recognizer proved to be a good deal more fun than TRON Legacy‘s racing counterpart. It’s not a great time by any stretch of the imagination, but it’s definitely the stronger side of the package.

In contrast to the lack of fun in terms of gameplay, TRON Legacy‘s presentation is surprisingly solid. The Daft Punk film soundtrack thumps away in the background, and some top notch reflection effects on the race tracks really manage to impress. The visuals on the race tracks really reminded us of the Playstation’s Wipeout series – which instantly made us wish that this game had been handled by the capable hands behind that futuristic franchise instead. 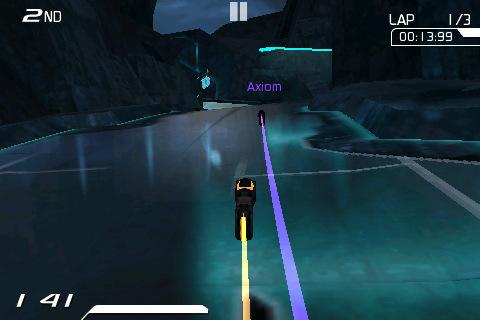 In opting for a straightforward racer, the folks at Disney Interactive really had to do something special to impress. Instead they decided to stick with the basics of the genre, and even these they couldn’t do well.

Even more frustrating is the fact that they didn’t need to stick with a straightforward racer at all. TRON fans would have been more than excited to play a proper lightcycle combat game, and they’ve proven it time and again by purchasing third-party TRONalikes like LightBike and LightBike2. Why Disney decided to go a different route is a question for the ages.

If you’re a fan of TRON or its recent big screen sequel TRON Legacy, this isn’t the game you’ll want to play to extend your movie-going experience. There are a few good choices on the App Store, but none of them have the official TRON name or Disney stamp of approval. We’d advise you to steer clear of this one, and instead petition Disney to port the sublime Tron 2.0 to the iPhone.