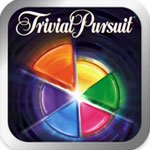 As an absolute trivia nerd, I met the announcement of Trivial Pursuit for the iPhone with both excitement and dread.Trivia nerds around the world agree, there are two things that Trivial Pursuit is known for; insanely difficult questions and creating a fantastic group experience.But the iPhone is aimed at keeping things simple, and generally focuses on the single player.Could EA somehow overcome these cross-purposes and make a great portable trivia experience despite this situation?

Trivial Pursuit successfully manages to offer up a unique single player scenario as well as a wealth of multiplayer options.But the difficulty?They’ve cranked that all the way up to 10 and added 3 more for good measure.This game is hard; brutally so for trivia newcomers.But that’s not a complaint.Playing a genuinely challenging trivia game is a breath of fresh air in the current climate of accessible trivia games.Even as a veteran trivia player, I found myself completely stumped on about half the questions thrown my way.That’s both a rarity nowadays and a good thing.Sometimes failing at a question is the one thing that will cement that piece of trivia in your head for a lifetime.

Of course, that difficulty isn’t going to appeal to everyone.Adding in an easy mode that picks the questions from a different pool seems like it would have been a fairly logical decision, but the developers didn’t decide to go that route.Considering how much they added elsewhere in the game, the oversight becomes that much more glaring.

Crafting a memorable single player experience was going to be a real challenge given the party nature of the original board game.Simply tackling and endless series of questions wouldn’t do; so much of the fun in the original is collecting pieces and moving your way around the board. As a result, the team at EA created Pursuit mode.Pursuit mode sees you advance from one end of a stage to the other as you make your way to the star square at the end.Each space you land represents a different category.The quicker you answer the question, the further you’ll move on your next turn.Your timer quite literally becomes the dice.Get the question wrong and only move one square.The catch?You’ll need to complete each stage in a certain number of turns to move on to the next level.Fail to do so and you’ll be starting that stage all over again.

mode is at the heart of the single player experience, but traditionalists can choose to play Classic mode with AI opponents while making their way around the wheel.You can even tweak the rules in the options menu to play Classic with the most common variations people have established in their homes.When it comes to multi-player, both Pursuit (you’ll be racing your opponent to the finish line) and Classic are available, both as pass’n’play (sharing the same iPhone) or with local wi-fi.It’s an incredibly robust package for $4.99.

Pursuit on the iPhone turned out to be a fantastic portable trivia title for trivia nerds, but the general population need not apply.While EA has done an amazing job of crafting an engaging single player experience and numerous multiplayer options that we don’t often see on the iPhone, the difficulty of the question is going to turn off the majority of the gaming public.There are dozens of trivia games in the AppStore that can appeal to a wide audience.It’s almost nice to have something that offers up a real challenge to the gamer that thinks they know everything.A definite must buy for hardcore trivia junkies or those looking to build up their knowledge of useless trivia. But if you’re easily frustrated and just looking for a walk in the park?You’ll want to steer clear of Trivial Pursuit.