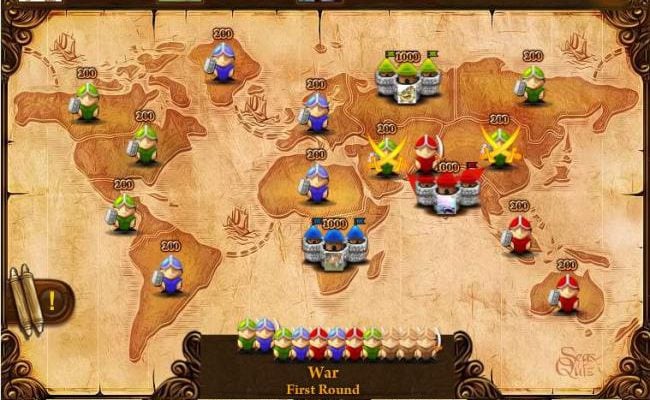 THX offers up a trivia game that is no trivial matter

THX Games have taken two gaming favorites and blended them together to make the Facebook equivalent of a Reese’s Peanut Butter Cup. Triviador is a fun mix of Risk-style strategy and Trivial Pursuit, and though it hits some awkward snags, it’s still a title quick-fix gamers will want to check out.

Triviador requires no in-game energy, nor is there a limit on the amount of time you can spend with the game. There’s no story and very little instruction here, but the game is easy to jump into and oddly addictive. 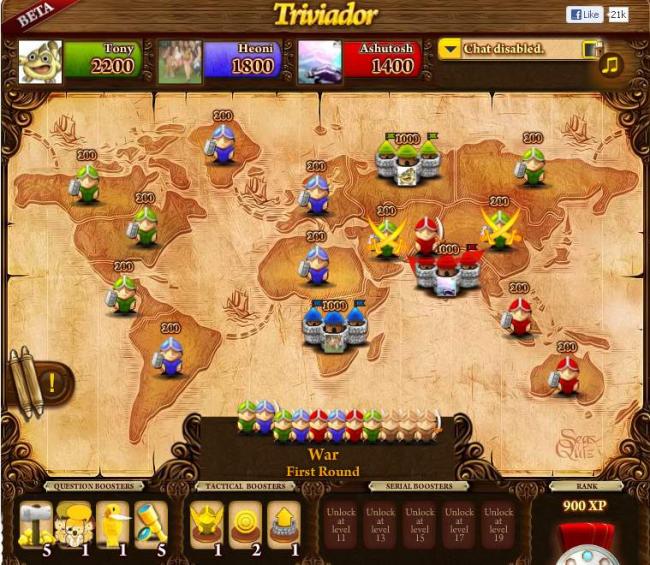 The fundamental idea of Triviador is to pit you against two other Facebook gamers in a conquest of the world. At the outset, each player is placed randomly somewhere on the world map, and you’ll compete to establish your respective kingdoms. There are two main phases involved in a single game: the conquest phase and war.

During the conquest phase, questions are presented to all players, and players are rewarded with army pieces to place on lands for correct answers and the speed in which they answer. Once lands have been divvied up, players move on to the war phase where they compete in one-on-one battles for total dominance. With consideration to where army pieces are placed during the conquest phase, there’s a good bit of strategic maneuvering to be done.

The trivia questions run the gamut of historical inquiries, birthdays of famous actors, and prolific quotes from novels, to the number of moons orbiting a given planet, or the atomic weight of carbon. There were, however, at least one or two questions I was greatly taken aback by, questions some Facebook gamers may actually find offensive. Considering the developers are Hungarian, there seems to be an innocent lack of sensitivity for certain issues, and Triviador definitely has its uncomfortable moments. 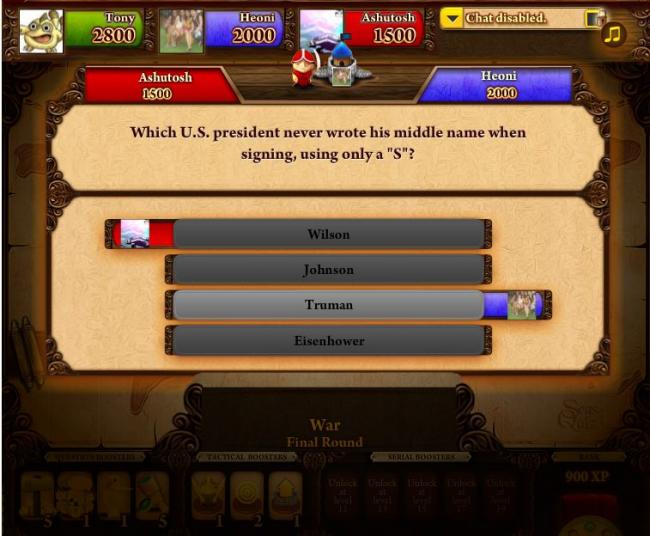 The game also has a few odd balancing issues. Rather than docking both opposing players for incorrect answers, the game will subtract the difference on answers requiring a number, giving the victory to the player closest to the correct answer. Additionally, the final round of the war phase opens up all players’ castles to attack, ignoring borders. Like the blue turtle shell in a Mario Kart game, it affords players in last place a second chance at victory.

In spite of the game’s issues, it’s still quite addictive and surprisingly competitive. Using strategy when placing your units and attacking enemy lands, as well as some good old-fashioned wit, makes for a fun formula Facebook gamers will want to come back to again and again. As an extra bonus, you’ll learn a little something along the way. Boost items and a pristine presentation bookend Triviador nicely. The visuals are simple yet attractive, and the background music and narration are a complete treat.

If you’re looking for another laidback way to pass the time between tags, Triviador is a solid choice.